Will Turkey sacrifice even more civil rights to battle terrorism?

Turkey is planning measures that could suspend freedoms to achieve operational effectiveness with a controversial "legal shield" for soldiers. 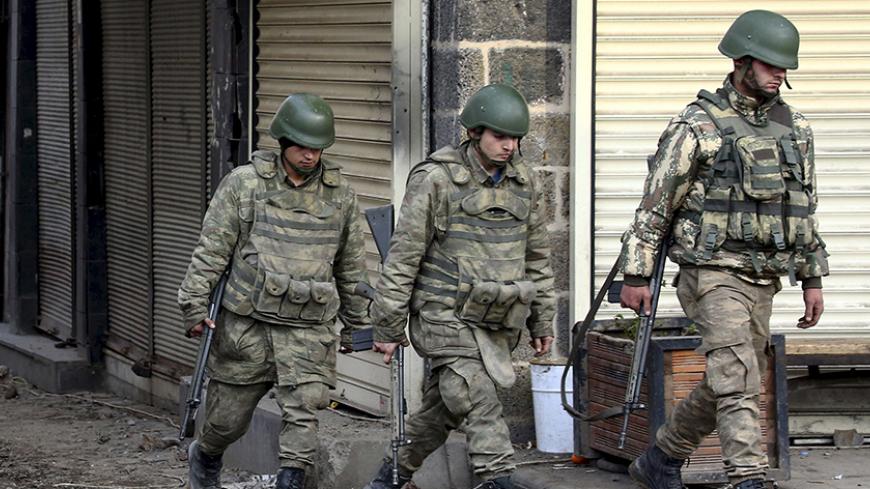 Turkish soldiers patrol Sur district, which is partially under curfew, in the Kurdish-dominated southeastern city of Diyarbakir, Feb. 26, 2016. - REUTERS/Sertac Kayar

​Turkey's parliament is considering a bill that would significantly broaden military authority at the expense, opponents say, of individual freedoms and privacy.

Although Ankara has declared "mission accomplished" in places like Nusaybin, Sirnak and Yuksekova, clashes continue in Turkey’s southeast with groups affiliated with the Kurdistan Workers Party (PKK), which Turkey considers a terrorist organization.

When a two-year cease-fire with the PKK collapsed a year ago, Law 5442 of Provincial Governance was adopted. The law stipulates that if provincial governors cannot control disturbances in cities by using local police and gendarmerie, they can ask for military help. When clashes escalate, the military uses armored vehicles and tanks in urban areas.

But the military says Law 5442 doesn't provide a comprehensive legal basis for urban operations using heavy armor, which can cause major damages.

Ankara had two choices to solve this quandary. The first was to declare martial law, which the constitution allows for when a situation emerges that signifies a status of war and when broad uprisings and widespread violence threaten the integrity of the country and its citizens. The second choice was to amend Law 5442.

Ankara’s decision-makers opted against martial law, yet delayed amending Law 5442 for several months. Finally, when Binali Yildirim became prime minister in May, his Cabinet's first major act was to submit to parliament a draft bill that covered the requests of the military.

What does the draft bill propose? Of 17 articles in the draft, Article 12 has attracted the most attention.

The article would allow the Turkish Armed Forces to take action in urban areas beyond its traditional rural operations and border security missions, and without the need for governors to transfer their authority. Limited transfer of authority would now be decided by military high command. This could mean longer term and increasingly militarized operations in urban centers. Military units would not be under the control of governors, but instead under direct orders of the chief of military staff. In joint police-military operations, command would lie with the highest-ranking officer on the ground. Governors would be responsible for observing and coordinating between the army and the police-gendarmerie.

If the bill were to become law, soldiers charged with crimes as the result of anti-terror operations would be tried in military, not civilian, courts.

Another stipulation of the draft bill regards searches of residences and businesses. Today in urban operations, residence and workplace searches require court orders, but sometimes complications arise that delay the process even in urgent situations. Under the new bill, in anti-terror operations when it is a matter of hot pursuit, the local unit commander can issue a written order that allows searches of nonpublic spaces where terrorists are believed to have taken cover, as long as a court order is approved within 24 hours. With this arrangement, the military can search civilian and private spaces without previous judicial permission. The legitimacy of such searches is determined later by a court.

Naturally, there are serious objections to the draft proposals. First among them is the risk of conceding considerable individual rights and freedoms for the sake of security and operational effectiveness in the field. Opponents fear the proposal would further strengthen what they already see as the state's iron fist. And how would civilians who feel wronged be able to complain, and against whom?

Another criticism is the conflict the plan could have with international agreements, particularly with European Union legislation. It won't be a surprise if hundreds of complaints are lodged with the European Human Rights Court if the draft bill is enacted. No doubt, Turkey will be subject to stern criticism from international actors, above all the EU, if the draft is passed.

The new arrangements would burden governors with serious responsibilities in preserving the balance between freedoms and security. In recent days, Ankara has been managing security operations from a centralized command without allowing much authority to local officials. If the new clauses reinforcing the authority of the military in local operations were combined with Ankara’s tendency for centralized command and control, local civilian authorities would not have an easy time taking initiative. In turn, the local population — already under pressure from stepped-up security measures — would have a tougher time. Prolonging the legal process civilians have to deal with when trying to defend their rights could also lead to further detachment from the state.

In other words, if the draft bill is passed and security becomes the priority, the government will lose the hearts and minds of people in affected areas. Winning their loyalty should be the basic goal of a people-centric approach. Unfortunately, Ankara still measures success in combating terror by the number of terrorists neutralized. In the short term, this could be perceived as military success, but in the long term, it could mean legal and socio-economic defeat. One has to hope that Ankara will come to realize it is not running a 100-meter sprint, but a marathon. At the moment, Ankara is locked on to the military success of the sprint because it believes it desperately needs this military victory for domestic consumption.