Turkey’s president looks to the past, rather than to his own failed policies; Aleppo offensive imminent; is Israel employing a double standard in its dealings with Turkey? 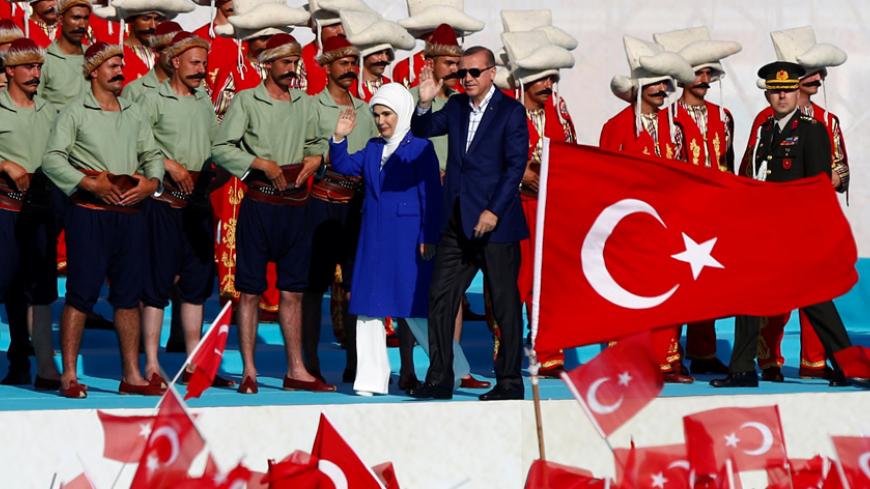 Turkish President Recep Tayyip Erdogan, accompanied by his wife Emine Erdogan, greets supporters during a rally to mark the 563rd anniversary of the conquest of the city by Ottoman Turks, in Istanbul, May 29, 2016. - REUTERS/Murad Sezer

Cengiz Candar reports Turkish President Recep Tayyip Erdogan’s bizarre remark at an iftar dinner on the second day of Ramadan, where he said, “Those who came with aspirations of occupying Istanbul now are using the terrorist organization as a tool. They wish to complete their unfulfilled dreams at the time of the Crusades, today with terror.”

Candar suggests that it might have been “somewhat confusing to readers to see Turkey’s president accuse Western countries of trying to revive their dreams of destroying Turkey alongside the statements of Western leaders strongly condemning the Istanbul terror attack [June 7] and standing with Turkey.”

“Turkey's only participation in these offensives [in Syria] has been to allow US-led anti-IS coalition jets to take off from Incirlik Air Base, and to engage in cross-border shelling of IS positions in northern Syria, mostly in response to IS shells lobbed into Turkey,” Idiz writes. “Meanwhile, predominantly Arab and Turkmen groups supported by Ankara, and operating under the broad umbrella of the Free Syrian Army (FSA), continue to perform poorly against IS. This contrasts sharply with the gains of the US-supported Syrian Democratic Forces (SDF), the bulk of which are made up of fighters from the Kurdish People's Protection Units (YPG).”

Fehim Tastekin reports, “The unexpected victory by IS [against Turkish-backed groups in al-Rai] panicked the Turkish government and muted objections to US joint operations with the SDF. Blows against Turkish-supported armed groups by IS offered a trump card to the Kurds. These Turkish-backed groups need SDF permission to exit the siege they are under. The SDF’s condition for opening a corridor from Marea to Aleppo is for the Turkish-supported armed groups to halt attacks against the Kurdish Sheikh Maksoud district of Aleppo. There is speculation that some of those groups might soon join the SDF. At the moment, at least two Turkmen units are cooperating with the YPG, showing that the Turkmen card is not entirely in Turkey’s hands.”

Idiz concludes, “Keeping in mind its continuing obsession with undermining Kurdish aspirations, it remains to be seen how much longer Ankara can sustain a policy, which may be gaining President Recep Tayyip Erdogan political points among his Islamist and nationalist supporters at home, but which is clearly undermining Turkey's interests and leaving it as the least influential player in a region where it once believed it was the most important actor.”

Tastekin reports separately on the Bukulmez outpost in Reyhanli, on Turkey’s Syrian border, where “the view from the outpost’s tower illustrates graphically Ankara’s position in the uprising against the Syrian regime. Eyes that were tasked to monitor the border from the tower were blind to breaches of the border at an illegal crossing point in front of the outpost that was the main supply line for the rebels in Syria. This meant that outpost didn’t carry out its true duties.”

Turkey’s interest in the border remains primarily focused on keeping the Syrian Kurds in check, and Turkey enforces a blockade on the Syrian Kurdish region of Afrin. Tastekin writes that Afrin “also is pressured by attacks from Turkey. When the SDF [Syrian Defense Forces] began to expand its territory toward Azaz and Tel Rifaat, Turkish army artillery fire killed five people. Behind Turkey's uncompromising attitude is the fear of a Kurdish corridor emerging. To the people of Afrin, linking Kobani with Afrin is of utmost importance. …The Afrin region has supported the PKK and all Kurdish political movements including the PYD since the 1980s; its people are truly politicized. In short, Afrin owes its resilience against the blockade to its defensible topography, a high level of political participation among its citizens and fertile soil that will not let them die of hunger.”

Syrian President Bashar al-Assad vowed to take back “every inch” of Syria in a speech in Damascus on June 7, as the battle for Aleppo appears imminent.

The Russian, Syrian and Iranian and defense ministers met in Tehran two days later, as Arash Karami reports for Al-Monitor.

Mohammed al-Khatieb reports this week from Aleppo on the city’s anticipation of a major assault by the Syrian government, backed by Russian and Iranian forces. “To lay siege to the city of Aleppo, the regime forces are betting on cutting Castello Road, which is the only outlet connecting the opposition-controlled areas in Aleppo to its northern countryside and through the province of Idlib to Turkey. To that end, the regime has been shelling this road almost continuously ever since the escalation of the bombing in Aleppo on April 25,” Khatieb reports.

While acknowledging the superiority of the Syrian government and allied forces, Khatieb writes, “Jaish al-Fatah, an operations room including several factions of the opposition, notably Ahrar al-Sham, Faylaq al-Sham and Jabhat al-Nusra, attacked the regime forces' positions in the southern countryside of Aleppo on June 3 in … an unexpected move.”

This column has regularly conveyed that the offensive in Aleppo could signal the beginning of the end of the war, and last week suggested that the United States “should coordinate its military operations with Russia to bring about an endgame in Aleppo and throughout Syria; avoid sectarian biases and entanglements that have ripped Syria apart; and discard, for good, confused arguments and advocacy that call for accommodation with al-Qaeda fellow travelers.”

Akiva Eldar reflects this week on Israel’s motivations in seeking to rebuild ties with Turkey despite Ankara’s “hidden war” on the Kurds.

“The focus on the atrocities committed by Turkey in 1915 and 1916 diverts attention from its cruelty in 2015 and 2016,” Eldar writes. “While demanding that Israel compensate families whose loved ones were killed in a pointless and negligent military operation, when Israeli commandos boarded the Gaza-bound Mavi Marmara vessel, Turkey is deliberately bombing Kurdish population centers in the country’s southeast. That same country that is so concerned about the blockaded residents of the Gaza Strip has for months been preventing food and medical supplies from reaching Kurdish towns. The Turkish government is not allowing Turkish and international media access to the flattened towns. In an investigative report, The New York Times dubbed the humanitarian crisis in the region 'the hidden war' of Turkey against the Kurds.”

Eldar concludes, “Germany’s recognition of the Armenian genocide, over Turkey’s furious objections, despite Berlin’s interests in ties with Ankara, underscores, justifiably so, the double standard of a state that lashes out at Holocaust deniers. Israel’s courting of Turkey’s tyrannical leader even as it ignores the bitter fate of the Kurds is a forceful illustration of the above.”