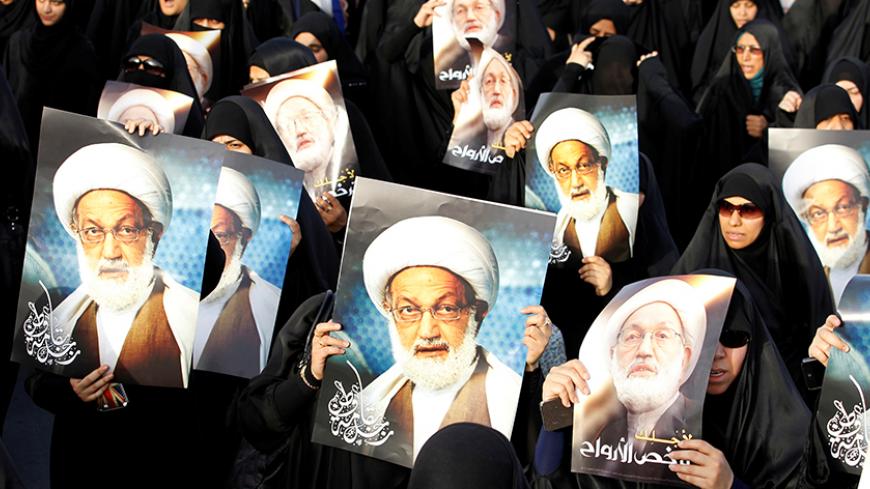 No statement surprised and gained more traction in Iranian and regional media than that of Maj. Gen. Qasem Soleimani, the head of Iran’s Islamic Revolutionary Guard Corps (IRGC) Quds Force. “They certainly know that trespassing the sanctuary of Ayatollah Sheikh Isa Qassim is a red line whose crossing will set fire to Bahrain and the region and will leave people with no path but armed resistance,” the statement by Soleimani read.

It continued, “The Al Khalifa [Bahrain’s rulers] will pay the price of their actions, and its result will be nothing but the annihilation of this bloodthirsty regime.” Soleimani also had a warning to Bahrain’s allies, saying, “The supporters of Al Khalifa should know insulting Ayatollah Sheikh Isa Qassim and the continuation of pressure on the people of Bahrain is the beginning of a bloody uprising.” Saudi Arabia, Iran’s regional rival, and the United States, which has stationed its 5th Fleet in Bahrain, are the country’s two most important allies and have helped the country weather the storm of protests led by the country’s Shiites, who make up the majority of the country.

Soleimani’s issuance of an extremely harsh political statement is a rare move for the general, who is currently in Syria and fighting alongside forces aligned with Iran, Syria, Hezbollah and Russia against mostly forces aligned with Saudi Arabia, Qatar, the United States and Turkey. Reformist newspaper Etemaad called the statement an “unprecedented warning of Gen. Soleimani to Bahrain.” Conservative Vatan-e Emrooz referred to the statement as an “ultimatum to Bahrain’s rulers.” The statement made the front page of half a dozen Iranian newspapers.

Qassim is known as the spiritual father of the country’s now-banned opposition group Al-Wefaq, whose leader — Sheikh Ali Salman — is serving a nine-year jail sentence. Qassim was born in Bahrain in 1937 and conducted his clerical studies in Najaf, Iraq, and Qom, Iran.

Two advisers to President Hassan Rouhani, who has been reportedly trying to mend fences between Iran and regional neighbors, took a softer position with respect to Qassim. Hamid Aboutalebi, deputy chief of staff for political affairs, while critical of crushing dissent, tweeted that the path to resolving the crisis in Bahrain is through “peaceful” means, which both the people of Bahrain and Qassim had advocated and spoken of. Hesamodin Ashna, presidential aide for cultural affairs, wrote on Facebook that the newly appointed deputy foreign minister for Arab and African affairs, Hossein Jaberi Ansari, has his “first serious challenge” in part from Soleimani’s statement.

Conservative analysts praised Soleimani’s statement. Mehdi Mohammadi, who was an adviser to Saeed Jalili, wrote that “Soleimani’s statement was the beginning of a movement in Iran’s strategy in the region.” Mohammadi said he would write more on the topic later, but he viewed this new “geopolitical movement” as the “finishing of military operations in Syria and Iraq, creation of a resistance army in the region, development of intelligence infrastructure against the Saudi-Israel alliance and the removal of the moderate Western-inclined.”

Conservative analyst Sa’adollah Zaeri said it was natural for Soleimani to oppose the decision by Bahrain to revoke Qassim’s citizenship. He added, “Until now, we have spoken with a soft position toward the Al Khalifa regime, and this regime has shown that it does not the ears to listen to peaceful speech.”