Deputy Crown Prince Mohammed's visit to Washington this month has some observers believing he might be the man behind all the major decisions in Saudi Arabia. 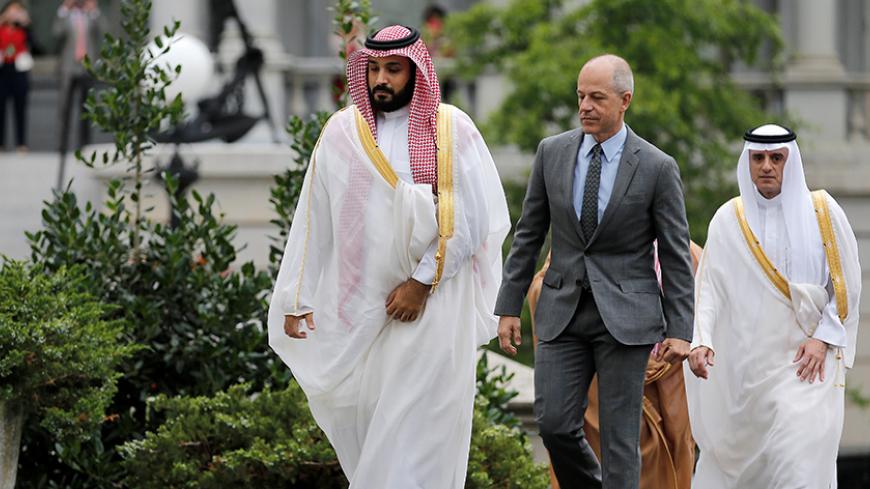 Saudi Arabia's Deputy Crown Prince and Minister of Defense Mohammed bin Salman (L) arrives at the Oval Office of the White House for a meeting with US President Barack Obama in Washington, June 17, 2016. - REUTERS/Carlos Barria

Saudi Deputy Crown Prince and Defense Minister Mohammed bin Salman is expected in New York on June 22 to meet with UN Secretary-General Ban Ki-moon. His visit is an apparent attempt to settle the dispute that resulted from Ban accusing Riyadh of applying undue pressure on the United Nations to remove the Saudi-led military coalition in Yemen from a list of entities violating children's rights.

US President Barack Obama had hosted Mohammed on June 17 at the White House. Following the meeting, Saudi Foreign Minister Adel al-Jubeir said at a press conference that it had been positive, focusing on the strategic relationship between the two countries and on ways the relationship can be strengthened. Furthermore, Obama was briefed about the kingdom’s outlook as presented in Saudi Vision 2030, the economic reform plan prepared by McKinsey & Company to guide Saudi Arabia in developing an economy based on sustainable investments, regardless of oil prices and fluctuations.

The communique circulated by the Saudi Royal Court on June 12, the day before Mohammed began his travels, stated, “At the direction of the Custodian of the Two Holy Mosques, King Salman bin Abdul-Aziz Al Saud, and in response to an invitation extended by the government of the US, His Royal Highness Prince Mohammed bin Salman bin Abdul-Aziz Al Saud, deputy crown prince, second deputy prime minister and defense minister, shall, on Monday June 13, 2016, depart for an official visit to the US.”

It thus can be concluded that Riyadh heeded an invitation hastily extended by Washington and that the Obama administration set the date for the visit despite the fact that senior Saudi officials do not traditionally embark on official foreign visits during the month of Ramadan.

As indicated in the communique, Mohammed's US visit was at the behest of his father, King Salman. Mohammed had previously visited the United States on two occasions — in May 2015, when he accompanied his cousin Crown Prince Mohammed bin Nayef to a meeting with Obama during the US-Gulf Cooperation Council summit at Camp David, and in September 2015, when he accompanied his father to discuss Middle East issues, including the nuclear deal with Iran, counterterrorism and the crises in Syria and Yemen.

What distinguishes the current visit is that Mohammed is leading the Saudi delegation in his capacity as deputy crown prince, second deputy prime minister, defense minister and president of the Council of Economic and Development Affairs. Endowed with such varied powers, he held talks with a range of American officials, including Secretary of State John Kerry, who met with him at his home in Washington on the evening of June 13. At the White House, Mohammed had also discussed, on behalf of the Saudi king, joint military, economic and security issues. Thus, it seems, Mohammed has the final say in Riyadh concerning these matters, allowing him to craft any subsequent agreements in their regard.

Although Mohammed arrived in Washington on June 13, the White House waited until June 16 to announce, through Deputy Press Secretary Eric Schultz, that Obama would meet with the deputy crown prince June 17 to discuss the conflicts in Syria and Yemen as well as the campaign against the Islamic State and other issues.

It seems that Obama’s decision to meet with Mohammed and US support for the ambitious Saudi Vision 2030 were linked to the outcome of Mohammed’s meetings with State Department, defense and security officials in Washington. It also seems that Obama’s decision depended on Mohammed’s receptiveness to the US point of view on the issues of combating terrorism in Iraq and Syria as well as ending the war in Yemen.

Although the stated purpose of Mohammed’s US visit, as Jubeir asserted at his press conference, was to hold talks and explore investment opportunities, there has been speculation and political commentary that his meetings with officials from Congress and the US security and intelligence communities will lead to marginalizing Nayef, who also serves as interior minister and chairman of the Council of Political and Security Affairs.

This possibility is lent some credibility as Nayef has been absent from the media, unlike Mohammed, whose political role has been increasing in the domestic and foreign arenas. It is necessary, however, that Nayef remain at the top of the political and security hierarchy to ensure the security and stability of the Saudi ruling family and its control inside the kingdom. Meanwhile, news of Nayef’s deteriorating health, as reported June 18 by NBC, which quoted a former intelligence source, does not seem accurate, given that he was seen June 16 in one of the largest mosques in Riyadh praying at the funeral of one of the princesses. In addition, he participated in the Saudi Cabinet session on June 20.

Even if the rumors about Nayef’s health are true, it would not represent a problem for the ruling regime, whose history is full of instances of kings who remained in office despite their waning health. In such cases, the real governance of the country was transferred to the crown prince, as when Prince Abdullah bin Abdul-Aziz assumed the real reins of power in 1995, when his brother King Fahd bin Abdul-Aziz fell ill, until the latter’s death in 2005.

Mohammed, who is close to Nayef, is very ambitious and has promoted himself to the world in his many visits to Western capitals. Despite all this, his ascending the throne will not be easy, as he will need to establish numerous relations and spend a lot of money to prove himself to his brothers and cousins who believe they are more entitled to the throne in terms of age and experience. Mohammed also needs to rehabilitate his tarnished image among Saudi citizens after having raised oil prices and imposed taxes.