Support for Hamas' political leader Khaled Meshaal has long been eroding in the Gaza Strip, and he may not even run in the upcoming leadership elections from his refuge in Qatar. 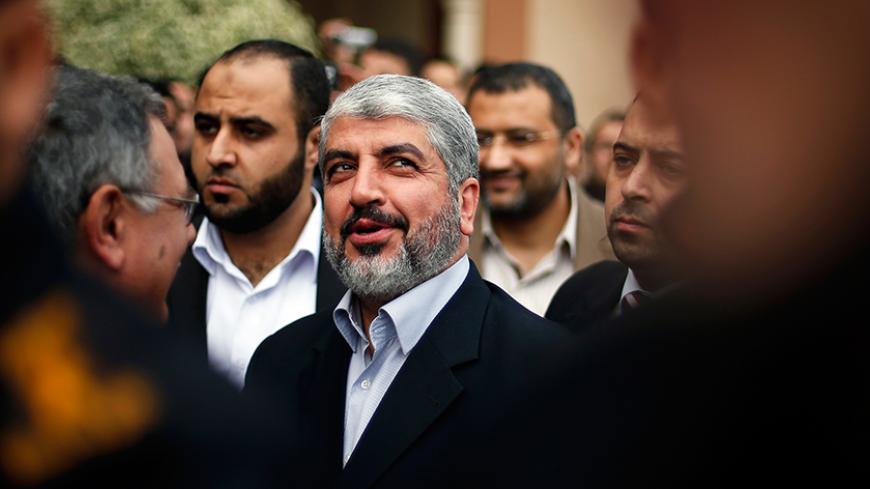 These are the final days of Khaled Meshaal’s leadership of the Hamas political bureau. Meshaal’s influence in the movement has been declining ever since he bet on the wrong horse and moved from Damascus to Qatar, where he did not find the support he had hoped for. Now his downfall is apparently about to be official and final.

The Meshaal era in the Hamas movement is coming to an end with a whimper. The London-based Al Wattan newspaper reported June 13 that the movement’s leader informed his associates in Qatar, where he has been living since leaving Syria and falling out with Iran, that he had decided not to run in the year-end elections for leadership of the political bureau and Hamas' decision-making body, the Shura Council.

About a year before Hamas' last internal elections in April 2013, Meshaal had considered stepping down and even announced at one point that he wouldn't run. He feared that Hamas' military wing in Gaza, Izz ad-Din al-Qassam Brigades, would torpedo his campaign. But after Israel’s November 2012 assassination of al-Qassam Brigades leader Ahmed Jabari and Israel’s Operation Pillar of Defense that followed, Meshaal came to Gaza and started rebuilding his status. He delivered a “victory speech” in the Square of the Unknown Soldier in Gaza City and announced that he would heed the call of the movement and continue to lead its political bureau.

This time, given his current standing in Qatar and the grim circumstances of Hamas, Meshaal understands it’s over. Even if, by some miracle, he manages to overcome the forces and currents arrayed against him in the deeply divided movement, there’s no way he will be able to extricate Hamas from the quagmire in which it is sunk.

Mousa Abu Marzouk established the political bureau of Hamas with painstaking efforts in the early 1990s from his perch in the United States. When the FBI arrested Abu Marzouk in 1995 and proceedings were begun to extradite him to Israel, Meshaal, who was then residing in Amman, was entrusted with directing the political bureau. He continued to hold onto the job, which consisted mostly of fundraising for Hamas, even after Prime Minister Benjamin Netanyahu waived Abu Marzouk’s extradition to Israel.

Meshaal’s standing as the movement’s undisputed leader was cemented after he narrowly escaped a 1997 assassination attempt by the Mossad in Amman. To appease Jordan’s anger over the attempted assassination on its soil, Netanyahu was forced to release Hamas’ spiritual leader, Sheikh Ahmed Yassin. Yassin’s release from an Israeli jail was considered a major achievement and credited to Meshaal.

After the March 2004 assassination of Yassin and of his successor Abdel Aziz al-Rantisi a month later, Meshaal became the movement’s most senior figure. He decided to push forward dramatic moves that turned Hamas into a power-hungry political movement. His leadership from Damascus is credited with bringing the movement to power in the 2006 elections. Since then, however, he has made nothing but mistakes.

The leaders in Gaza complained that Meshaal, out of the range of Israel’s security agencies, adopted an overly militant policy that had already resulted in a catastrophe for Gaza. Senior Hamas figures Ghazi Hammad and Ahmed Yousef were reported to have traveled to Damascus specifically to tell Meshaal and other members of the political bureau to their faces that they were responsible for Gaza’s destruction in Israel’s Operation Cast Lead in December 2008.

But the main thrust of the criticism was and remains the contention that after Hamas' electoral victory and its establishment of a government to rule the Gaza Strip, there was no longer any reason to have a leadership in exile. The head of the political bureau found a comfortable safe haven in Qatar and lost his power base and influence in Gaza in the ensuing years. Though in the past Hamas had needed Meshaal to raise funds for the movement around the world, now not only had his fundraising capacity declined, he had become a burden. Meshaal fell out with Iran and became anathema to the regime in Tehran. As long as he continues to head up the Hamas political bureau there’s no chance of improved ties with Iran, once one of the movement’s economic and military pillars.

Meshaal understands his position well. All signs suggest that the era of former Prime Minister Ismail Haniyeh will soon begin. Anyone familiar with the political intrigues and power struggles within the movement knows Haniyeh is Meshaal’s natural successor. He has come a long way since the days when he was Yassin’s right-hand man. His opponents, among them Fatah party officials and senior Israeli intelligence officers, used to belittle Haniyeh and call him the “washer of Ahmed Yassin’s bedpans.”

Haniyeh is indeed not blessed with a particularly strong backbone, but is endowed with two important traits: charisma and pragmatism. His fiery speeches and relatively moderate political approach — which attracted supporters from outside Hamas, too — led him to the top of the Hamas ballot in the 2006 elections. Nonetheless, over the years Haniyeh learned that moderate and pragmatic stands would not take him far in a movement whose powerful military wing has the final say. He thus became increasingly aggressive and militant until fully aligning himself with the most radical of Hamas leaders.

The following story illustrates Haniyeh's duplicitous character and conduct: Haniyeh had taken refuge in the home of his friend Samir Masharawi, a Fatah leader in the Gaza Strip, in the 2004 Israeli helicopter gunship blitz against the Hamas leadership. Masharawi hid Haniyeh in his home, where he arrived disguised as a woman. During the June 2007 military coup, artillery shells were fired at that same house.

When the Izz ad-Din al-Qassam Brigades tried to wipe out his friend, Haniyeh did nothing and did not say a word to save him. Masharawi, who was considered a close associate and right-hand man of then-Fatah leader in Gaza Mohammed Dahlan, survived the shelling. But since then he has been telling everyone he knows that those perilous days are proof that Haniyeh is willing to sell out his principles and morality for his position, power and influence.

In the previous political department elections in 2013, Haniyeh beat Abu Marzouk and was named deputy head of the bureau. In the coming elections, Haniyeh is likely to be named its head. Presumably, even in this position, he will not become the strong man of Hamas and will keep dancing to the tune of the movement’s military wing.