IDF Chief of Staff Gadi Eizenkot has canceled the Hannibal Directive, designed to prevent at any cost the abduction of Israeli soldiers. 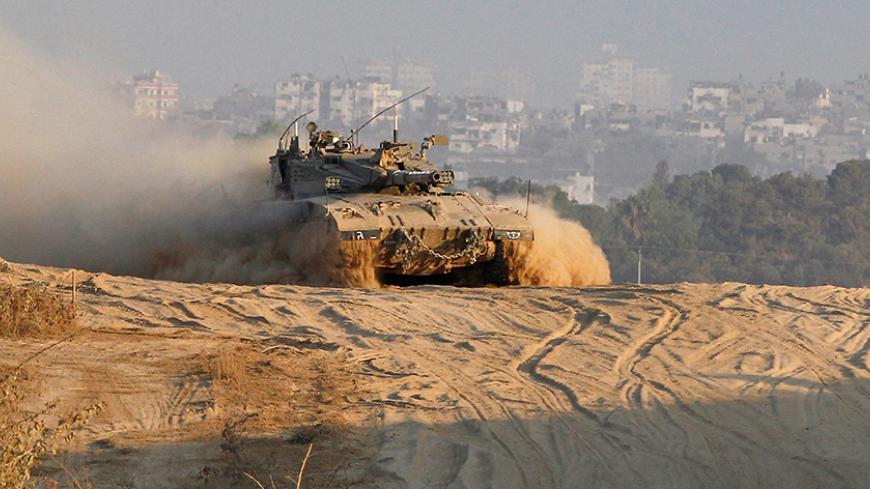 An Israeli military tank returns to a staging area in Israel after leaving Gaza, Aug. 3, 2014. Israel had just declared 1st Lt. Hadar Goldin dead, who was feared to have been abducted by Hamas Islamist militants in the Gaza Strip. Goldin's body has not been returned. - REUTERS/Siegfried Modola

On June 28, it was published that Chief of Staff Gadi Eizenkot recently decided to cancel the Hannibal Directive, a controversial measure that has been in place since 1986 to thwart enemy attempts to capture Israel Defense Forces (IDF) soldiers. The directive allows forces on the ground to take a series of measures in order to foil, prevent or thwart a capture, without getting authorization from superiors. One of these measures is firing at the captors, even if this risks the life of the captured soldier himself.

In recent years, and especially after the capture of Gilad Shalit in 2006 by Hamas, the directive has been unofficially and creatively interpreted in ways that allowed soldiers on the ground to aim heavy, sometimes indiscriminate, fire toward the area where the capture occurred, with the aim of thwarting it at any price. Although it has never been written or articulated officially, the operating assumption of soldiers is that preventing capture could also come at the cost of the life of the soldier.

Since Israeli society cannot stand the situation of a soldier captured by a terror organization and puts heavy pressure on the government to free him at any price, the Hannibal Directive has turned into a creative, cruel and uncompromising means of preventing the capture of soldiers and of saving the state strategic defeats like the release of more than 1,000 terrorists, hundreds of them “heavy” murderers, as happened with the Shalit exchange in 2011.

The paradox is that in the case of Shalit’s capture, which happened exactly 10 years ago (June 2006), the Hannibal procedure was not enacted. An IDF tank identified several suspicious figures crossing the fence from Israel to the Gaza Strip immediately after the incident where terrorists attacked IDF positions and captured Shalit. In retrospect it became clear that these were Shalit and his captors. The tank didn’t succeed in connecting with the battalion’s commanding officer over the communication net and therefore didn’t fire at the individuals, as the directive requires. Such fire would have quite likely killed the group, relieved Israel from a national trauma that lasted five and a half years (when Shalit was in captivity), and saved it the release of hundreds of Hamas killers, some of whom returned to terrorism and have been responsible for killing many Israelis.

On the other hand, Shalit’s name would have joined those of his two friends who were killed at the same attack, 1st Lt. Hanan Barak and Staff Sgt. Pavel Slutzker, and he would have been another forgotten IDF casualty.

The question of the Hannibal procedure is not only operational, but also moral and ethical. The IDF has a myth according to which “you don’t leave an injured soldier in the field.” In recent decades, another myth has gained ground, according to which Israel is willing to do anything, and to sacrifice almost everything, in order to redeem its soldiers from captivity. The fact that at the time these soldiers are captured, during the short “golden opportunity” that is created from an operational standpoint while the abduction is ongoing, those soldiers may be killed as the IDF directs heavy fire toward the “site of capture” in order to prevent it, is entirely opposed to these myths.

In the shadow of Shalit’s capture and the controversial swap for his return, during Operation Protective Edge the event called “black Friday” occurred in Rafah. On Aug. 1, 2014, in the last days of the operation, a Hamas cell succeeded in striking at IDF forces at the outskirts of Rafah and capturing 1st Lt. Hadar Goldin, an officer in the Givati brigade who was the nephew of then-Minister of Defense Moshe Ya'alon.

The IDF’s response on the ground was devastating and immediate: Hellfire rained down on the neighborhood where the capture occurred and caused enormous destruction and dozens of casualties. In retrospect, it became clear that Goldin was killed during the incident. It’s unknown whether his capture was prevented as a result of IDF fire or whether he was killed earlier. The incident was widely criticized by the public, especially by international bodies. The IDF’s response, according to critics, was disproportional, resulting in heavy damage to human life and property.

In this case, Israel also didn’t enjoy the full benefits of preventing a capture: Goldin's body, it seems, is in the hands of Hamas, and his family demands its return and his burial in Israel. In recent days a public campaign was launched to return his body, together with the body of another Israeli captive, Staff Sgt. Oron Shaul, whose body was taken in an incident in the Shajaiya neighborhood in Gaza at the start of Operation Protective Edge.

At the bottom line, the government is at the receiving end of much public pressure to work to return the bodies and profound international condemnation for implementing the Hannibal procedure in Rafah. The estimation is that this incident in Rafah was the final catalyst that moved the chief of staff to direct the revocation of the Hannibal Directive and the formulation of an alternative directive in its place. The formula of the new directive hasn’t been decided on and publicized, but the assumption is that it would significantly moderate the instructions on opening fire in the case of a suspected capture of a soldier.

The chief of staff’s decision has raised controversy. Israeli philosophy professor Asa Kasher, who wrote the IDF’s code of ethics, warmly praises the decision: “It’s a holiday for democracy and for the sanctity of life,” he told Al-Monitor this week. “I have fought against this directive for many years.” Kasher recently protested the decoration of an IDF soldier where one of the acts that won him the honor was firing toward a house where a Hamas militant had brought a captured IDF soldier. The house collapsed and the capture was prevented. In retrospect, said Kasher, it became clear that an IDF soldier was not killed as a result of fire at the house, but it could have easily happened.

On the other hand, senior officers in IDF combat units, and many right-wing politicians and public figures, fear that Israel would return to the starting point. “A situation where Israel has no answer for the spate of captures is a dangerous situation,” a senior officer in the reserves told Al-Monitor this week on condition of anonymity. “The government fears making a decision that would limit its freedom to release murderers in prisoner exchanges on the one hand, and now they’re tying the hands of the IDF in an effort to prevent captures when they occur, on the other hand. Terror organizations are following all of this, and they have no reason not to renew their efforts to try to capture soldiers,” he said.