Can US, Turkey keep up appearances in Syria? 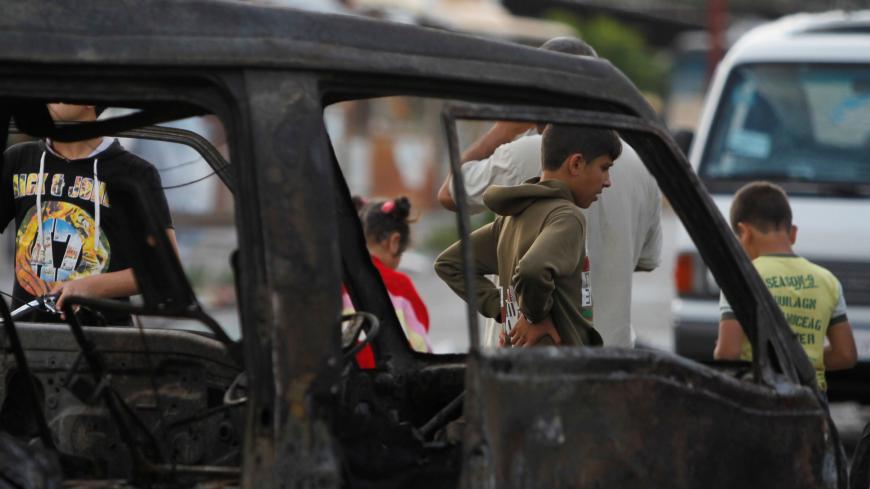 Children inspect a damaged site after explosions hit a bus station in the Syrian city of Jableh, May 23, 2016. - REUTERS/Omar Sanadiki

A terrorist group linked to the Islamic State (IS) claimed responsibility for suicide bombings in Tartus and Jableh in Syria on May 23 that killed more than 150 civilians and wounded more than 200 others. Maxim Suchkov points out that the attack in Tartus occurred deep inside government-controlled territory. Russia maintains a naval base in Tartus and an air base and reconnaissance center in Khmeimim in the Latakia region. The suicide attacks, Suchkov suggests, could be a catalyst for a Russian “first strike” strategy against terrorist and aligned Salafi groups.

Moscow had already signaled the prospect of escalation against Jabhat al-Nusra and allied groups prior to the May 23 attacks. The Russian Ministry of Defense has announced a pause in its air campaign to allow armed groups allied with Jabhat-al Nusra to distance themselves from the al-Qaeda affiliate. On May 26, Jabhat al-Nusra, Ahrar al-Sham and allied groups seized the town of Dirkhabiyah near Damascus. Ahrar al-Sham has coordinated more closely with Jabhat al-Nusra in response to increased US and Russian targeting of the al-Qaeda affiliate over the past few months.

This column last week suggested that the United States take up a Russian offer to coordinate attacks on Jabhat al-Nusra, which is not a party to the cessation of hostilities. For the record, we have no tolerance or empathy for groups or individuals who stand with al-Qaeda. We hope that this is at least part of the message the United States is conveying to its regional partners who have backed these groups.

With the Geneva talks suspended for several weeks, the prospect of a Russian campaign to deliver heavy and potentially fatal blows to Jabhat al-Nusra and its allies, especially in and around Aleppo and Idlib, could signal yet another turning point in the Syria conflict.

The United States and Turkey are struggling to keep up appearances in Syria, despite even further signs of division and discord.

Gen. Joseph Votel, US CENTCOM commander, met last week with Syrian Kurdish forces during a “secret” visit to northern Syria as part of a regional diplomatic tour that also included a stop in Ankara. Votel told Washington Post columnist David Ignatius that he is seeking to “balance” Turkey’s role as a “fabulous” partner in the battle against IS with that of the People’s Protection Units (YPG), the backbone of the Syrian Defense Forces (SDF), which is a “very good partner on the ground.”

In contrast to the YPG, Turkey’s proxy forces, including a worrying mix of Salafists who are willing to run operations with Jabhat al-Nusra, have been a flop. Last week, IS seized at least seven villages in the northern Aleppo region.

Fehim Tastekin reports that SDF-led military operations to liberate Jarablus, which is an essential gateway along with al-Rai to the outside world via Turkey, were postponed “because of Turkey's red line against the Kurds.” The offensive against Raqqa has also been slowed, writes Tastekin, because “the SDF's operational capacity still leaves much to be desired. It is not an option for the Kurdish YPG-YPJ to control Raqqa, because they will encounter local resistance. They also worry that scattering their forces in Arab regions could weaken the defensive lines of Rojava (Syrian Kurdistan). Therefore, Arab forces would have to get in shape to control the situation in the post-IS period.” Laura Rozen reports from Washington that the United States is seeking to boost the numbers of Arab Sunni forces among the SDF in anticipation of an advance on Raqqa.

Meanwhile, the Pentagon found itself in a public relations fiasco after Turkey complained that US special forces in Syria were wearing badges with the logo of the YPG, which Turkey considers the Syrian partner of the Kurdistan Workers Party (PKK) and therefore also a terrorist organization. This might be compared with what in the sports world is known as an unforced error, and made Votel’s already daunting diplomacy that much more complicated.

Air Force Col. Sean McCarthy also told Ignatius that US air operations against IS out of Incirlik Air Base were mostly "autonomous" of Turkish missions, saying that "we don't discuss with them where we're going.”

Adding it all up, the US-Turkish "partnership" against IS may be more fable than fabulous. The open secret is that Turkey is preoccupied first with thwarting advances by Syria’s Kurds, and second with shutting down the remaining lifelines for IS in northern Syria. These priorities are of a piece. No doubt Turkey is taking up the fight against IS, but first things first. Tastekin, who previously broke the back story on Turkey’s disastrous proxy efforts to retake al-Rai from IS in April, now concludes that “there is no room for optimism that Ankara will erase its red lines vis-a-vis the Kurds. Instead, Turkey is now trying to put together an even more formidable force with Jabhat al-Nusra, which it is trying to steer away from al-Qaeda.”

The catch might just be that many of the Syrian armed groups backed by Washington’s regional partners are proxies for a sectarian agenda that is mostly about toppling Syrian President Bashar al-Assad, however unlikely that now appears, and, by extension, keeping the heat on Iran. The when and where of taking the fight to IS or Jabhat al-Nusra is more or less negotiable, depending on trade-offs and pressure. We do not feel we are out on a limb in suggesting that efforts by Ankara or others to wean Jabhat al-Nusra from al-Qaeda will come to no good. This column has repeatedly documented the fluidity of foreign-backed Salafi groups such as Ahrar al-Sham and Jaish al-Islam shifting in and out of tactical alliances with Jabhat al-Nusra, all the while preaching an ideology almost indistinguishable from al-Qaeda and IS.

The losers, of course, are the people of Syria, including those who suffer under IS’ tyranny that much longer because of Turkey’s concerns about the Kurds, and as Washington’s policymakers and pundits begin another maddening deep dive into how to rejigger ethnic and sectarian fault lines. Syrians fleeing IS terror in Aleppo, meanwhile, told Mohammed al-Khatieb that living under IS is “like hell … unbearable.” While we acknowledge the complexities and challenges of the raw ethnic and sectarian politics of Syria, as well as the potential for vendettas and mass killings, there is, in our score, an urgency and priority to focus on the destruction of IS and al-Qaeda above all else.

Diyarbakir’s historic district of Sur has witnessed some of the most brutal fighting between Turkish military and PKK forces over the past year. Mahmut Bozarslan reports from Diyarbakir that “historical landmarks in Sur, which was last year added to UNESCO’s World Heritage List, also suffered their share of destruction. The walls of the Armenian Catholic church are partially destroyed, while the nearby Haci Hamit Mosque is missing its minaret, with a dome riddled with bullets. Another Armenian church, Surp Giragos, had its windows shattered and interior damaged.”

“Still, those ancient monuments were lucky compared with more ordinary structures in the area,” writes Bozarslan. "A building with an intact door was almost impossible to find. The warring parties had used some buildings as fighting bases, others as places to rest. Stairways were littered with empty tins; one was also stained with blood. At the bloodied spot, a piece of paper reading “body #1” was left behind, suggesting that the security forces had been there for a crime scene report. A couple seemed relieved that they had escaped with relatively little damage, but grumbled that their apartment had been broken into, with the bedroom and closets rummaged. They claimed it was the security forces who had entered, while their neighbor showed Al-Monitor binoculars that had been left behind."