Abdel Fattah al-Sisi’s call for Israeli-Palestinian peace has given Isaac Herzog some justification for joining the coalition, and with Avigdor Liberman now showing openness to joining as well, the prime minister has a choice to make. 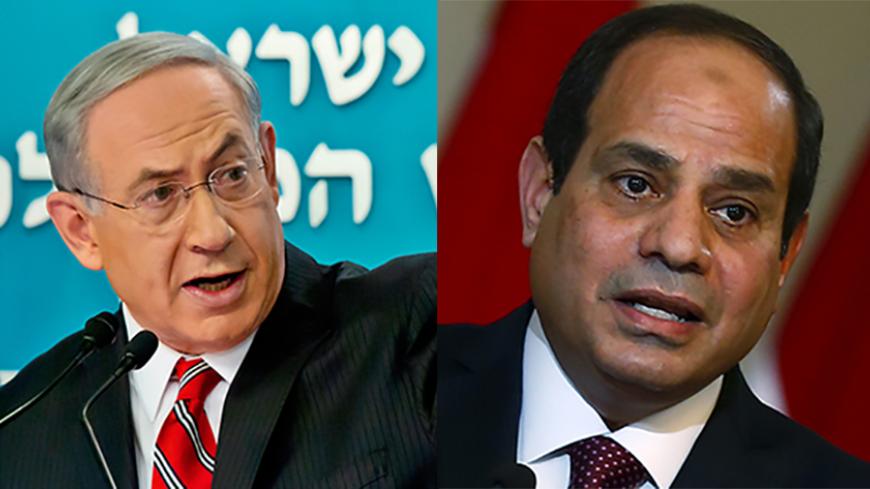 At the end of a particularly dramatic 24 hours, even for Israel’s volatile political scene, Zionist Camp leader Isaac Herzog was forced to suspend negotiations for joining Prime Minister Benjamin Netanyahu’s government. Meanwhile, Yisrael Beitenu head Avigdor Liberman has been trying on the Defense Ministry for size. The entire Middle East is on standby. No, it hasn’t happened yet, but chances are that Liberman will end up with his hand on the rudder of Israel’s defense system — the same Liberman who threatened to blow up Tehran and the Aswan Dam in 2001.

Netanyahu summoned him for an urgent meeting immediately after Liberman concluded his May 18 press conference. Likud officials claim that the deal with Liberman could be wrapped up in a matter of hours. Now we wait to hear what the present Israeli Defense Minister Moshe Ya’alon has to say.

It all began on the afternoon of May 17. Very rarely does a hidden reality of moves that take place far from the eyes of the public and the media come into focus. Such a moment came in a speech by Egyptian President Abdel Fattah al-Sisi, when he addressed the Israel-Palestinian conflict. Sisi surprised everyone when he called on “Israeli parties” to come to a national agreement regarding an arrangement with the Palestinians.

After a few minutes, Zionist Camp leader Knesset member Isaac Herzog hurried to publicize an enthusiastic expression of support for the words of the Egyptian president. Herzog fell upon Sisi’s statement as if he’d struck gold, calling it “a dramatic announcement that reflects a possibility for a historic process, where the moderate Arab world expects Israel to courageously, strongly and soberly extend its hand."

But that’s not all: A few minutes after Herzog’s announcement, Netanyahu released a similar statement. He congratulated the Egyptian president on his words and “willingness to invest all efforts to promote a future of peace and security in the region.” He noted, “Israel is ready to join Egypt and other Arab states in promoting the diplomatic process and stability in the region.”

These statements come at a crucial time in the contacts between Netanyahu and Herzog for the Zionist Camp to join the government. And precisely before the 12th hour, startling heavy-duty strategic weapons have entered the fray: the Egyptian president, who is almost as popular in Israel now as US President Bill Clinton once was. Herzog has been taking strong blows from all sides in recent days, mainly from members of his own party, for his “crawling” into the coalition. Sisi is giving him vital artillery in real time. See, I told you, Herzog is saying. We have a real opportunity to make a difference, and the Zionist Camp can lead the diplomatic negotiations. This is not about a race for portfolios and cushy jobs or political survival, not at all.

The one who enlisted Sisi in the battle for enlarging Israel’s government was Netanyahu himself. The past year has seen the development of an especially intimate, strategic relationship between the Israeli prime minister and the Egyptian president. They talk at least once a week, coordinate their steps and orchestrate unprecedented Israeli-Egyptian security cooperation.

On May 10, a jarring note disturbed this intimacy when Netanyahu said, in a speech he delivered in honor of Israel's Memorial Day for Fallen Soldiers, that only the threat of Israeli military action led to the release of six Israelis from the Israeli Embassy in Egypt when it was attacked by a rioting crowd in 2011. Netanyahu’s statement was divorced from reality, and the prime minister released a correction and clarification a short time later. Relations then returned to normal, and on May 17, Netanyahu injected Sisi into Israel’s political front to save Herzog.

Herzog is grasping at straws to save his career. He seems to have come to the conclusion that under the current circumstances, he has no chance whatsoever of rehabilitating his public image and position and will continue to fade out until he’s replaced. So, Herzog says to himself, if I’m going out, better to go out as a foreign minister. From that position, he can restore his image by rehabilitating Israel’s international position and status. Netanyahu, for his part, needs Herzog on his side as the prime minister faces a four-pronged challenge in the coming months: the terrible days of President Barack Obama’s last few lame-duck presidential months, an anti-Israel European resurgence, talk about a peace summit and increased world pressure on Israel.

During the last two years, much larger plans have been concocted behind closed doors in the various Middle East capitals. The “Sunni axis” drawn between Cairo, Riyadh, Amman and the Gulf capitals have been trying to find a way to square the circle and facilitate the renewal of diplomatic negotiations between Israel and the Palestinians, including a long-term cease-fire plan for Gaza. The objective is to calm the atmosphere and increase the chances of the moderate states in the war against the Shiites. These plans were drawn back in the days of former Foreign Minister Liberman and have been kept tightly under wraps ever since. Occasionally, vague hints escape to public ears, and the most salient of them appeared in Sisi’s speech this week.

But while these very words were being written, Liberman held a press conference in the Knesset and, as is his wont, he reshuffled the cards. Until now, Liberman had categorically negated any possibility that he’d join Netanyahu’s government and increase his coalition majority from 61 to 67. Yet, Liberman changed course once again and announced that there would be something to talk about if Netanyahu offered him a serious proposal. Such a proposal, he indicated, should include the defense portfolio, the premier’s backing for the death sentence for terrorists and a pension arrangement for immigrants from the Russian Commonwealth of Independent States. After the press conference, Netanyahu called Liberman and invited him to what would be their first meeting after a long disruption in relations.

It’s not that Liberman suddenly fell in love with Netanyahu overnight. Liberman’s main goal in all this was to tear the mask off of the prime minister, who claims that he is bringing the Zionist Camp into the government because he has no other choice, as Liberman had flatly turned him down. Liberman wants to disprove this excuse and make it very hard for Netanyahu to justify this course of action to his right-wing constituents, the ones that the prime minister ate for breakfast in the last round of elections on March 2015.

Now Netanyahu does have a choice: Liberman or Herzog. And he will have to decide soon, even if Herzog withdrew from the negotiations.