More Israelis are determined to protect IDF soldiers' lives at any cost, an attitude that has had major repercussions for Israeli military operations despite the better judgment of its commanders. 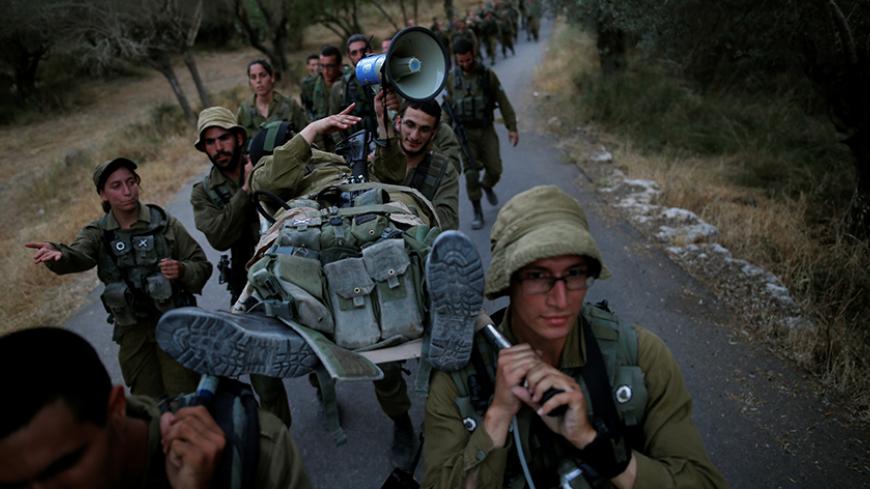 Israeli soldiers of the Search and Rescue Brigade carry their comrade on a stretcher during a training session in Ben Shemen forest, near the city of Modi'in, May 23, 2016. - REUTERS/Amir Cohen

When Israel's recently designated Defense Minister Avigdor Liberman took a stand in support of the soldier who shot to death an incapacitated attacker in Hebron on March 24, he knew exactly what he was doing. True, he is a quintessential right-winger, but it was not ideology that motivated Liberman in this case. It was the understanding that he was strumming the strings of widespread popular sentiment.

This affair, which pitted supporters of the uniformed shooter against the military establishment that denounced him and dragged the Israel Defense Forces into a growingly radicalized social discourse, provided an opportunity to examine current public attitudes toward IDF soldiers: a warm, supportive, parental approach that puts the soldiers first at the expense of civilians and, as in the latest case, at the expense of democratic values, the IDF code of ethics, open-fire regulations and the authority of the military chain of command. Defense Minister Moshe Ya'alon and Chief of Staff Gadi Eizenkot had condemned the act.

"The First Lebanon War was a watershed moment as regards attitudes toward fallen soldiers, when protests were held over the deaths of soldiers there," Yagil Levy, a sociologist studying military-societal relationships at the Open University, tells Al-Monitor.

On the other hand, Knesset member and reserve Maj. Gen. Elazar Stern (Yesh Atid) argues that the 1982 protests were mostly directed against government policy, and he therefore points to the formation of the "Four Mothers" movement as a historic turning point after which public perceptions turned to seeing IDF fighters as children who must be protected. The movement was founded in 1997 by four mothers of fighters after 73 soldiers were killed in an airborne collision between two helicopters carrying troops to Lebanon. It called for an IDF withdrawal from Lebanon, citing concern for the fighters' lives. Their effort is considered one of the central elements in the decision by then-Prime Minister Ehud Barak to withdraw Israeli soldiers from southern Lebanon in May 2000.

Six years later, in the Second Lebanon War, changing attitudes toward soldiers had already infiltrated the IDF's doctrine. The report of the Winograd Commission appointed to examine the 2006 military campaign clearly determined, "The IDF conducted itself during the war like one whose fears of casualties among its soldiers played a central role in the planning process and operational considerations."

Stern says, "While civilians were being killed day after day in the heartland, in the conduct of the IDF there was a clash between single-minded adherence to the mission, meaning defending civilian lives and thwarting threats against them, and [protecting] human life — meaning the lives of the soldiers." Levy explains that this war ingrained in the IDF a legacy that holds fallen soldiers dearer than civilians, from which the government derived legitimacy for its very aggressive firepower policy implemented in clashes in Gaza, saying, "There's no ethical dilemma anymore about who to endanger first — Israeli soldiers or enemy civilians."

But it appears that not only the lives of enemy civilians are ranked lower than those of soldiers, but also those of the Israeli civilians the soldiers were sent to defend. Thus, for example, thwarting the threat of Hamas' tunnels, which the public views as a threat to civilians in the Israeli communities along the Gaza border fence, was not one of the goals set out for the 2014 Operation Protective Edge in Gaza until there was absolutely no other choice, following an attack by Hamas activists on Israeli territory. The deaths of soldiers in that war also affected the public far more intensely than the deaths of civilians. The funerals of soldiers, those who had no family in Israel and those whose families asked for public support, brought tens of thousands of strangers to cemeteries. On the other hand, Daniel Tragerman, 4, killed by a mortar shell that hit his home in the Gaza border kibbutz of Nahal Oz, was just one more casualty in the annals of war. The masses did not turn out to escort him to his final resting place.

Levy talks about a social trend he dubs "childrenification," saying, "The dependence of the young generation on their parents has increased significantly, as has their involvement in their lives. They live at home longer, the parents pay their way and, of course, interfere a lot in their military service."

Udi Lebel, a professor at Ariel University who also studies the symbiosis between Israeli society and the IDF, adds, "Parents are required to buy military gear for their kids and they spend tens of thousands of shekels on top-quality military equipment that the army does not provide, and even on essential operational equipment." Given the declining motivation for combat duty in recent decades, soldiers are becoming a far dearer resource, and the army needs positive parental influence on the youths. But parental involvement does not stop where the IDF finds it convenient, and parents expect the military to protect the lives of their sons and daughters and back them up at all cost. That was exactly the case in the Hebron shooting.

Lebel points to another aspect, saying there's a process underway of turning the soldier into a victim of forces far greater than he is. "The left claims the soldiers are victims of the occupation policy, and the right claims that they are the victims of [rigid] open-fire regulations and an overly apologetic attitude toward the enemy." And if the soldier is a victim, he must be protected against the army that turns him into one.

Amos Harel, Haaretz' veteran military commentator, says the IDF is well aware of these trends and even troubled by them, but is often forced to go along. "The IDF spokesman generates items that stir up national feelings: interviews with women casualty assistance officers, emotional write-ups. Maybe there's no way around it. If Gilad Shalit, a fighter, emerges from one of the best armored tanks in the world and turns himself in to Hamas without a fight, and his freedom is obtained through the release of hundreds of murderers, and the only thing the public has to say is that 'he is everyone's child,' then the only thing the soldier needs is a hug from his parents. This has a marked effect on the IDF. Look, even then-Chief of Staff Lt. Gen. Benny Gantz saluted him. What's there to be proud of? But in the public's view, he is our child."

So is Elor Azaria, the soldier from Hebron denounced by the defense minister and chief of staff and put on trial but who nonetheless enjoys the support of wide swathes of the Israeli public. Not only because he shot a Palestinian terrorist, in keeping with the calls to do so by many public figures, but largely because he is a soldier sent out on a mission. The Israeli public, made up mostly of former soldiers, expects backing for its children and is willing to bear its teeth at anyone who threatens to hurt them, even if they have violated the law and even if it means clashing with the popular IDF.