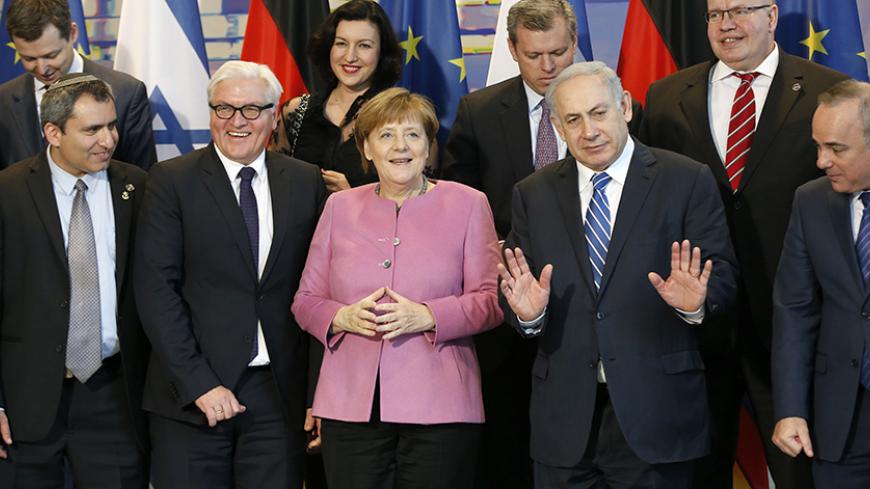 Former Israeli Foreign Minister Abba Eban used to say that Israeli politicians make the right decisions only after making every mistake possible. Prime Minister Benjamin Netanyahu makes the right decision only after using up all his tricks. This is how he has managed for years to deepen the occupation but talk about a two-state solution; expand the settlement enterprise but be welcomed with open arms by states that view the settlements as a violation of international law; be reprimanded by the Germans but get a submarine from them at a deep discount and lease them drones for a fortune. Will the May 1 report in the German magazine Der Spiegel about the German government's re-evaluation of its policy on the Israeli-Palestinian conflict push Netanyahu closer to the bottom of his bag of tricks? Might he soon be making the right decisions regarding the conflict with the Palestinians?

On Feb. 16, Israel Hayom celebrated Netanyahu’s seeming victory over the enemies of the status quo between Israel and the Palestinians: “Merkel: Now is not the time for 2-state solution,” read the headline in the daily that reflects the winds blowing from the office of the prime minister. At the end of a meeting with Netanyahu, Shlomo Cesana, the paper’s correspondent who covered the prime minister's visit to Berlin, quoted him as saying that German Chancellor Angela Merkel had “admitted that this is not the time for the two-state solution.”​ Netanyahu did not conceal his satisfaction with what he perceived as the chancellor’s updated insight. “We have here a more realistic approach to the situation in our region and to the situation between us and the Palestinians,” the prime minister told reporters. “I said this a year ago and everyone ranted and raved against me,” Netanyahu bragged.

In February 2014 during a visit to Jerusalem, Merkel had said, “Part and parcel of the secure future of Israel is obviously the two-state solution: a Jewish State of Israel and alongside it, a Palestinian state.” Sadly for Netanyahu, however, the alternative to the “ranting” at him about the burial of the two-state solution is not a funereal silence. France is promoting an international conference that would seek ways to revive the 2003 two-state road map. Paris does not appear to be overly bothered by Israel's opposition to the initiative, and the Obama administration is not pulling Netanyahu’s irons out of the European fire as it usually does.

Merkel’s reported comment about the two-state solution should have therefore been interpreted by Netanyahu as a warning signal, not an all-clear. German Foreign Minister Frank-Walter Steinmeier's Feb. 16 statement — “The situation in the West Bank is not sustainable” — should have been taken more seriously. It makes clear that, as far as Germany is concerned, the status quo and perpetuation of the occupation are not acceptable. To disabuse Israelis who are gambling on the “special relationship with Germany,” Merkel said last month that she understands why Palestinian President Mahmoud Abbas keeps appealing to the United Nations, requesting that it recognize a Palestinian state based on the 1967 borders.

Merkel's interesting comment was made April 19 during a visit by Abbas to Berlin. Following the visit, the Palestinian leader announced that he had accepted the European request to postpone the planned presentation of a resolution to the UN April 21. A senior Palestinian source who spoke on condition of anonymity told Al-Monitor that Abbas had never really planned to present the request before the conference being promoted by France. His advisers explained to him that in any case, until Nov. 8, the date of the US presidential elections, there is no chance of pushing through a UN resolution that could be interpreted as even remotely critical of Israel. So while Jerusalem is giving the French initiative the cold shoulder, the Palestinians are not only welcoming it warmly, they are also removing the supposed barrier of a unilateral move at the United Nations.

Abbas has managed to maneuver successfully among his rivals at home and does not need elections or a coalition to rule or to decide whether and when to turn to the UN. Netanyahu, on the other hand, is hemmed in on all sides. Even if he were interested in promoting the two-state solution, which is doubtful, he would be risking his domestic bliss. After his February meeting with Merkel, Netanyahu said that top world leaders, including US President Barack Obama, “understand that the practical things are those that can be done right now.” Given the current coalition and the composition of the Likud Knesset faction, however, he is unable to advance even a small practical thing, like a temporary freeze on construction in the settlements.

Netanyahu has never excelled at withstanding pressure. The question now is who is pressuring him harder: the international community, which is trying to push forward a serious diplomatic process, or his political community, which rejects any process that mentions the expression “Palestinian state.” When Ariel Sharon, Netanyahu's Likud predecessor, found himself faced with the same dilemma, he opted for a unilateral withdrawal from the Gaza Strip in 2005. Sharon also replaced Likud hawks with Shimon Peres and his buddies from the Labor Party. If Netanyahu decides to withdraw to the line of the West Bank separation fence and to give up the far-flung Palestinian neighborhoods of East Jerusalem, he could replace the Likud hawks and his partners from HaBayit HaYehudi with Isaac Herzog, the leader of the Zionist Camp, and his buddies.

One of the better-known aphorisms of former US Secretary of State Henry Kissinger was that Israel doesn’t have a foreign policy, only a domestic one. Israel might fast be approaching the juncture at which the two converge. At this critical junction, there are two options: to crash or to merge together onto a new road.