Observers anticipate that additional explosions will take place in Baghdad, given the presence of sleeper cells within the capital’s borders. 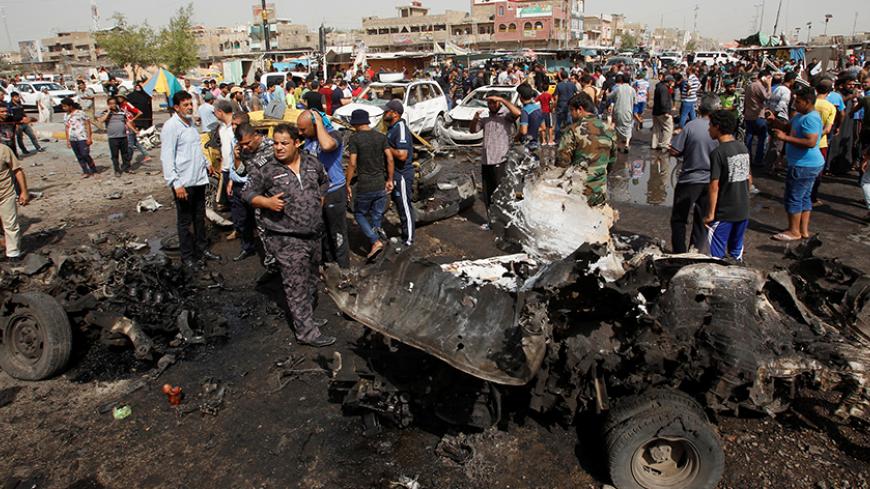 Iraqi security forces and people gather at the site of a car bomb attack in Baghdad's mainly Shiite district of Sadr City, May 17, 2016. - REUTERS/Khalid al Mousily

May 17 was another bloody day for Baghdad. Terrorists targeted Sadr City in eastern Baghdad, al-Shaab district in northern Baghdad and al-Rasheed neighborhood in southern Baghdad with explosive belts and car bombs, killing and wounding 162 people.

The tragic events that occurred in a short period in Baghdad at the hands of the Islamic State (IS) showed that security agencies are still unable to protect its citizens and anticipate IS attacks, despite previous experiments, warnings and expectations.

Security officials did not attribute the bombing to their ineffectiveness, but rather to sleeper cells in the capital and other Sunni-majority areas of the Baghdad Belt, which are regions surrounding the capital that they described as a safe haven for terrorist organizations and possibly the primary source of terrorists carrying out the bombings.

Moreover, some attributed the security deterioration in the capital to poor intelligence efforts and the security forces’ recklessness in handling the obtained intelligence information. Others believe that IS seeks to distract attention from its defeats by targeting Baghdad with bombings.

In this context, IS is expected to conduct a new series of bombings. Unidentified intelligence sources at the Iraqi Federal Police said May 17 that “information indicates that IS intends to carry out more bombings in Baghdad in the coming days.”

The sources added, “There were instructions that security forces be on red alert and deploy additional staff in the capital’s neighborhoods in anticipation of any terrorist act.”

Saad al-Matlabi, deputy head of Baghdad’s provincial council’s security committee, told Al-Monitor, “There are sleeper cells in the capital and Baghdad Belt, which pose a threat to the capital. This is because they are always thinking and planning how to target civilians in the bombings, which are conducted to disrupt the security situation and distract attention from [IS] defeats on the battlefronts.”

He added, “Intelligence efforts must be activated and pre-emptive operations need to be conducted against IS before it carries out any terrorist acts.”

A source at Iraqi Prime Minister Haider al-Abadi’s office told Al-Monitor that Abadi intends to make “changes among security leaders in charge of protecting the capital and to announce that new security officials have been delegated.”

The source said, “The investigations that Abadi as commander in chief of the armed forces ordered to open due to security breaches in Baghdad proved that security officials neglected the tasks of protecting civilians.”

Since May 22, tight security measures have been taken in Baghdad. A security source at the Interior Ministry told the media May 21, “The joint forces [the Iraqi army, police and the Popular Mobilization Units] have taken strict security measures in the Baghdad Belt, particularly in Abu Ghraib, Yusufiyah, Rashidiya and al-Mada'in, in anticipation of any terrorist attacks that could be carried out from these parts against Baghdad.”

The source added, “The crackdown in some of these parts prohibited the movement of people and vehicles; the area has become almost under a curfew.”

Security expert Maj. Gen. Abdul Karim Khalaf told Al-Monitor, “IS is well-equipped and has employed several people to carry out terrorist acts. This sign of danger requires that significant intelligence efforts be made to identify and dismantle these cells before they conduct any terrorist acts.”

Khalaf added, “The security investigations proved that the Baghdad Belt is not the source of terrorist acts occurring in Baghdad. Rather there are sleeper cells within the capital, and these cells are contributing and conducting the ongoing bombings in the Iraqi capital.”

Khalaf noted that “terrorist acts in Baghdad will increase, because IS is incapable of making any confrontation on the battlefronts and proves its strength in car bombs and explosive belts. The bombings will not end unless IS is eliminated and political differences are resolved. This is because they provide IS with incentives to conduct terrorist operations.”

The only available option for the Iraqi government seems to be the activation of intelligence efforts. The fraudulent sonar handling system is still being used at checkpoints inside Baghdad, which has angered Iraqis who have been critical toward checkpoints and considered them futile, as bombings continue to be carried out in their areas.

IS has found many opportunities to carry out operations in Baghdad, given the city’s size and the lack of any effective security plans, which are limited to cutting off access to roads. Furthermore, IS sleeper cells in Baghdad are yet to be identified, although security forces are deployed in the streets.