Though seemingly opposed to each other, the reality is that US Republicans and Iranian hard-liners play complementary roles for each other, as they give one another excuses to advance their respective domestic agendas. 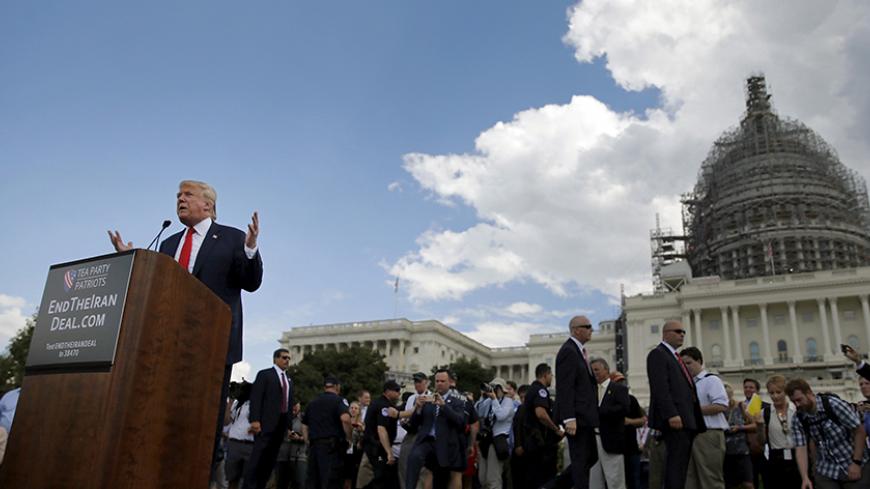 US Republican presidential candidate Donald Trump addresses a Tea Party rally against the Iran nuclear deal at the US Capitol in Washington, Sept. 9, 2015.

TEHRAN, Iran — Iranian hard-liners and US Republican presidential candidates are considered to be staunch enemies on virtually every issue — apart from the Joint Comprehensive Plan of Action (JCPOA), apparently.

“My No. 1 priority is to dismantle the disastrous deal with Iran. I have been in business for a long time. I know deal-making and let me tell you, this deal is catastrophic.”

“If we know the JCPOA is disastrous, then we should reject it, and be sure that nothing will happen afterward.”

These quotes aren’t from the same person; in fact, the two live far away from each other. The first one is from Donald Trump, and the latter is from Hossein Shariatmadari, the well-known hard-liner and editor-in-chief of Kayhan newspaper.

Iranian hard-liners and Republicans — who many ordinary Iranians consider to be American hard-liners — have always been unequivocal enemies. As seen under former Iranian and US presidents Mahmoud Ahmadinejad and George W. Bush, no constructive negotiations were held between the two countries. Iranian moderates, who seized the presidency in 2013, do not consider the US administration — whether Democratic or Republican — to be reliable either. However, in contrast, they do not pass up opportunities to negotiate when windows appear. Moreover, they’re always looking for useful and peaceful tools to resolve outstanding disagreements and problems.

For instance, in response to a question about the Iran-US relationship, Iranian Foreign Minister Mohammad Javad Zarif told a local magazine, “Interaction doesn’t mean that we are friends. Interaction means that we should take advantage of the opportunities to improve the country’s situation. In fact, interaction has the connotation of decreasing costs. … However, we have no enmity toward the American people; we have issues with the US administration’s policies.”

On a separate occasion, Zarif said in a speech at the University of Tehran, “Thanks to the discourse of Iran’s Islamic Revolution, we have the ability to engage in interaction, confrontation and negotiation.”

Iran’s Supreme Leader Ayatollah Ali Khamenei is not opposed to negotiations either. “Publicity should not be done in a way that indicates that we are opposed to talks. We should negotiate strongly and with vigilance so that we will not be deceived. … Our time calls for both talks and missiles,” Khamenei said recently.

Now, in a surprising move, Shariatmadari has publicly endorsed Trump. “The wisest plan of the crazy Trump is tearing up the JCPOA,” Shariatmadari said. The editor also said, “The JCPOA is a golden document for the US but is considered nothing except humiliation and a loss for Iran.” This line of reasoning has been met with censure by a senior member of the Iranian nuclear negotiating team. “I’m astonished that Mr. Hossein Shariatmadari has supported Trump,” Hamid Baeidinejad, director general for political affairs of the Foreign Ministry, wrote on his Telegram channel.

The manner in which Shariatmadari and Trump are publicly sharing an objective or view, particularly as representatives of fiercely opposed political factions, may astound many in Iran and the United States. Yet the reality is that these two factions in effect play complementary roles for each other, as they give one another excuses to advance their respective domestic agendas.

For instance, on May 7, 2015, amid the intense negotiations leading up to the JCPOA, the US Senate approved a bill that established congressional review of any nuclear deal as part of the six world powers’ negotiations with Iran. Five days later, on May 12, 2015, hard-liners in Iran seized the opportunity to obstruct the negotiations on their end — negotiations that they altogether considered as a trump card for President Hassan Rouhani in the then-upcoming Feb. 26 parliamentary and Assembly of Experts elections. Thus, they introduced a bill to stop the nuclear negotiations. However, parliament Speaker Ali Larijani stepped in to stop the measure.

In an interview with Al-Monitor, Mahdi Motaharnia, a political science professor at Islamic Azad University, said, “Radicalism in any country has one single identity. Hard-liners all over the world seek a tenacious situation in order to take advantage of it to their own benefit. This is why you see Donald Trump as a hard-liner in the US, and Hossein Shariatmadari as one of the mouthpieces of hard-liners in Iran’s conservative camp who have convergence against the JCPOA.”

To some extent, the Republicans’ measures over the years have come to have an impact on Iran’s domestic politics. For instance, Bush’s labeling of Iran as a member of the infamous “axis of evil” helped Ahmadinejad in his bid for office in the 2005 presidential election, ultimately contributing to ever deepening and twisting the nuclear crisis.

Motaharnia told Al-Monitor, “During Bush’s tenure, former President [Mohammad] Khatami had a Reformist approach, and his efforts to seek rapprochement in foreign policy were set back by Bush accusing Iran of terrorism. That obstructed Khatami’s foreign policy and helped a hard-liner, namely Ahmadinejad, to become president. Thus, the [Iranian] hard-liners hope a Republican [will] win the [upcoming] US presidential election.”

Ultimately, the victory of a US presidential candidate such as Ted Cruz or Donald Trump — both of whom are known in Iran as American versions of Ahmadinejad — is actually preferred by hard-liners in Iran, as it serves their interests. In fact, Iranian hard-liners continuously seek to find a way to make their case, often aided by remarks by US politicians such as Arkansas Republican Sen. Tom Cotton, to crush the moderates in Tehran.

Indeed, threatening remarks against Iran by some US senators during the course of the negotiations, including Cotton, were quickly utilized by opponents of the JCPOA in Iran. For instance, outgoing hard-line member of parliament Hamid Rasaee, a prominent critic of the JCPOA, said, “If the JCPOA is approved, the US will definitely attack Iran. They have said that the next president of the US has a better opportunity for invading Iran.” In this vein, it should be noted that the latter is not a one-sided game, as hard-line officials in Iran in turn give the required pretexts for anti-Iran figures in the United States to obstruct constructive interaction between the two countries.

Motaharnia concluded, “In the world of politics, any development can affect the outcome [of other developments]. Thus, Trump or another Republican candidate’s victory will surely have its own effect on Iran’s [June 2017] presidential election. The victory of a radical like Trump or Cruz in the [November US presidential] election provides an opportunity for more pressure on the moderate Rouhani administration.”