Education Minister Naftali Bennett and his colleagues from other Orthodox parties know that teaching their ideology to school children will benefit themselves politically in the long run. 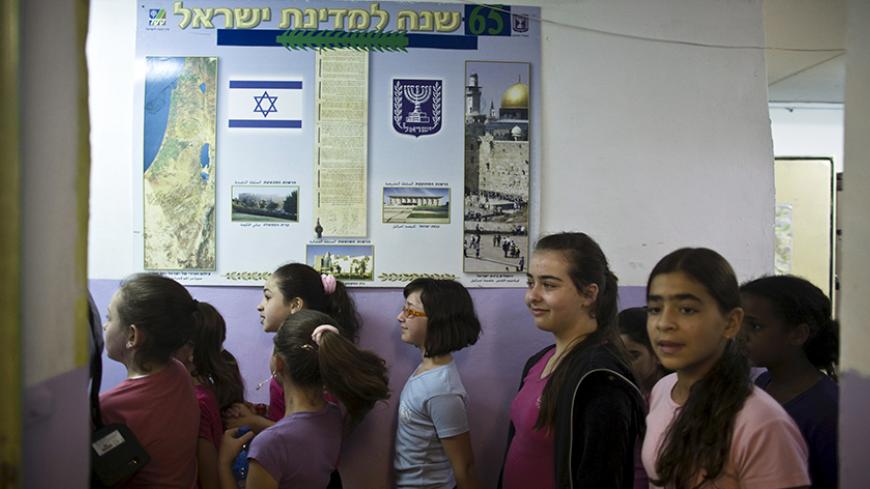 Israeli elementary school students stand in the hallway of their school in Jerusalem, June 2, 2015. - REUTERS/Ronen Zvulun

The holiday of Passover is also known as the Festival of Freedom. The traditional Seder dinner sanctifies and glorifies the Jews’ exodus from Egypt as an escape from bondage into liberation. It’s a religious holiday with a positive universal message. You could say that the Passover Hagaddah text is an ancient edition of the story of the Holocaust and the revival of Jewish statehood, with the addition of miracles God did for our ancestors.

The practical lessons that Israeli children — ultra-Orthodox, national-religious and secular — receive from the Israeli education system are as follows: The Jewish people has been the victim of persecution since time immemorial; the land of Israel was given to the people of Israel along with the Torah; there’s a god, and he chose us out of all the nations. It’s not customary to spoil such religious rites and national myths that pass down from generation to generation with ''heretical speculation'' — like the total absence of the exodus from Egypt — a major regional event — from Egyptian writings from the Pharaonic era. In addition, dozens of archaeological missions from all over the world have searched in vain for the presence of a multitude of people at Kadesh-Barnea, the place where, according to the biblical story, the people of Israel encamped on their way from Egypt to the land of Canaan. The problem is that these myths, the likes of which are common in all religions, have been translated in recent years into a political platform and have become a kind of legal deed of ownership.

Prime Minister Benjamin Netanyahu has pointed to the existence of ancient synagogues on the Golan Heights as “proof” that the Golan was and remains part of the land of Israel. The narrative of the exodus from Egypt contains even more ancient “proof” that the Jewish people obtained ownership of the land of Canaan so many generations ago. In this story, no other people have any right to any part of the Holy Land. The problem is especially serious when the Ministry of Education, which is responsible for the curricula, is in the hands of a religious politician from the radical right. It is even more serious when this politician, who has ambitions of leading the nation, builds political power by disseminating nationalist, fundamentalist sentiments.

The minister of education and chairman of HaBayit HaYehudi, Naftali Bennett, makes sure to speak in one breath about the combination of instructing Jewish and Zionist values and instilling universal values (as he did in a speech on Feb. 29 at the first annual conference for policy-makers in the humanities, held at the Van Leer Institute in Jerusalem). However, when Bennett speaks of Jewish values, he means the Orthodox Judaism from “his father’s home.” For instance, according to the new curriculum in “Israeli Jewish culture” for public schools that the minister presented last week, the main topic taught in the fifth grade will be “the attachment of the people and the land.” Students will learn about the Jewish prayer book and teachers will emphasize the fasts marking the destruction of the Jerusalem temples. Orthodox organizations, run by associates of HaBayit HaYehudi, received 95% of the budget allocated to support Jewish culture. Pluralistic organizations, like Zehut and Panim, which offer critical perspectives on Jewish history and secular Jewish culture, are left to gather up the crumbs and beg schools to let them in.

It’s not only for the sake of heaven the Bennett is making sure to invest the public’s hard-earned money in education that conforms to his vision. He knows that today’s students will be tomorrow’s voters. In time, he’ll joyfully reap the seeds he’s so carefully sowing in the education system. It’s not for nothing that the ultra-Orthodox parties, Yahadut HaTorah and Shas, run independent school systems and conduct all-out war against attempts to insert core subjects — obligatory classes in the public system like math, English and science — into their curricula. Ultra-Orthodox Knesset members Yakov Litzman and Aryeh Deri also know the political dangers lurking in instruction of the natural sciences. God forbid that their children hear about the existence of the theory of evolution. The Likud, Labor and recently even Yesh Atid dare not provoke the ultra-Orthodox parties, fearing that election day will turn into a day of vengeance. The price is paid by tens of thousands of children who will reach adulthood without learning basic life skills.

Last October, an organization of former ultra-Orthodox Jews, Out for Change, filed a unique civil lawsuit against the government. In the name of 52 young people, the organization claims that the state allowed the schools and yeshivas in which they studied to shirk their responsibility to provide them with the ability to learn a profession and make an honest living. As a result, they received only the most basic education in critical subjects like math, English and science. The state has denied responsibility and even announced to the court last week that it intends to sue the parents of the plaintiffs and the dozens of ultra-Orthodox schools and yeshivas where they studied. That is, the state intends to sue parents who sent their children to educational institutions that it itself allows to operate as well as the institutions that it funds.

The defense's argument in this case returns us to Bennett’s “Israeli Jewish culture” curriculum. The defense claims that the former ultra-Orthodox plaintiffs and their parents had the freedom to choose from a variety of available schools. And indeed, theoretically a resident of the ultra-Orthodox Jerusalem neighborhood Me’ah She’arim who wishes to ensure his children receive a comprehensive education within the public education system is allowed to register them in a public religious or secular school. On the other hand, a parent who wants his children to learn Jewish culture undiluted by religious messages is forced to find another institution outside the public school system.

In the course of negotiations to form the government, it was publicized that Bennett demanded one of two “prestigious” ministries — foreign affairs or defense. It seemed that the leader of HaBayit HaYehudi had to make do with the Ministry of Education — at first glance. In fact, at age 44, he’s in no rush. For hundreds of years Jews have turned their eyes to the east, to “Rebuilt Jerusalem.” Bennett can wait a few more years in the Ministry of Education on Jerusalem Haneviim Street with his eyes to the west, to the prime minister’s residence on Balfour Street.