Were Bibi's Golan comments a 'death blow' to peace?

The declaration by Prime Minister Benjamin Netanyahu that Israel will hold on to the Golan Heights forever threatens any possibility of an agreement with the Palestinians and Arab states. 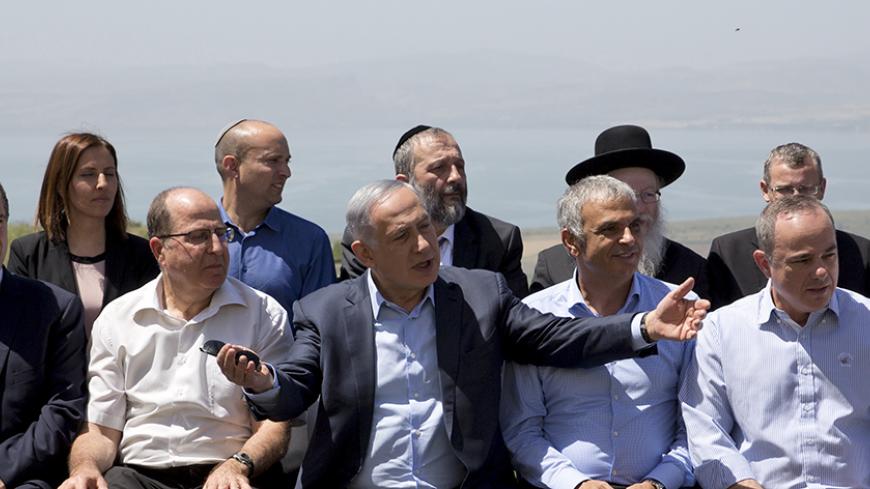 Israeli Prime Minister Benjamin Netanyahu (front C) poses with ministers prior to the weekly Cabinet meeting in the Israeli-occupied Golan Heights near the cease-fire line between Israel and Syria, April 17, 2016. - REUTERS/Sebastian Scheiner

If words could move borders, the State of Israel would extend from the river of Egypt as far as the Tigris and Euphrates rivers. On April 17, Prime Minister Benjamin Netanyahu, standing on the Golan Heights, declared, “Golan was an integral part of the Land of Israel in ancient times [and therefore it is] an integral part of the Land of Israel in the modern era.” What proves that the Golan Heights belonged, and still belongs, to the State of Israel? “The dozens of ancient synagogues around us attest to this,” said the prime minister. Thus, Netanyahu added, “It’s time, after 50 years, that the international community finally recognizes the fact that the Golan will remain under Israeli sovereignty permanently.”

The world, as it proved rather quickly, does not recognize ancient synagogues as border markers and is not impressed by highly publicized meetings that the Israeli government conducts on foreign soil. Not only did Israel’s two best friends, the United States and Germany, not “finally” recognize the unilateral 1981 Israeli implementation of its law on the Golan Heights, their foreign ministries were quick to condemn Netanyahu’s declaration and to make clear that their position was and remains that the Golan annexation law and the establishment of settlements in the area constitute a violation of international law. The European Union’s November 2015 decision instructing member states to label settlement products also applies to products made on the Golan Heights. The same holds for the recent UN Human Rights Commission resolution calling for the compilation of a black list of companies operating in Israeli-occupied territories.

Netanyahu did not really expect the festive declaration from the heights of the rocky plateau on his government's first anniversary to change the position of the international community on sovereignty over the Golan Heights. The choice of time and place for his declaration was linked to US and Russian efforts that same week to reach a diplomatic agreement on ending the bloodshed in Syria. At the negotiations in Geneva, the representatives of the Bashar al-Assad regime demanded that the arrangement include a return of the Golan Heights to Syria. At the “festive Cabinet meeting,” Netanyahu reported that he had told US Secretary of State John Kerry that Israel “will not oppose a diplomatic settlement in Syria, on condition that it will not come at the expense of the security of the State of Israel.”

Just as Israeli opposition did not thwart the nuclear deal with Iran, Netanyahu’s stance on Syria will not hinder reaching an agreement to end the fighting in the neighboring country. The grand production on the Golan Heights was reminiscent of Netanyahu’s March 2015 speech of horrors to the two houses of Congress arranged behind the back of President Barack Obama. The prime minister’s use of security arguments for territorial, ideological and political needs has greatly eroded their credibility. For example, in a 2001 conversation with a bereaved Israeli family, Netanyahu boasted that during his first term in office, from 1996 to 1999, he had undermined the Oslo Accord by declaring the entire Jordan Valley to be part of the “security sites” that the two sides had agreed would remain in Israeli hands.

The Cabinet meeting on the Golan Heights will not benefit Israel in any sense. The prime minister’s declaration of the Golan Heights as an integral part of the State of Israel will not change the stance of any state regarding the lands conquered by Israel in 1967. On the other hand, it has already caused damage. Quashing prospects of a diplomatic arrangement with Syria — an agreement is infeasible without an Israeli withdrawal from the Golan Heights — was interpreted by the Arab League as a death blow to the Arab Peace Initiative. Arab media reported that in response to a Kuwaiti demand, Arab League members agreed to convene April 21 for an emergency session to debate Netanyahu’s declaration on the Golan Heights.

The Arab Peace Initiative, adopted in 2002, offers Israel security arrangements and normalization of relations with Arab states in return for Israeli withdrawal from the lands captured in 1967, on all fronts. This does not mean that the Arab states expect Israel to hand over the Golan Heights right now to the faltering Assad government. On the contrary, the difficult situation in Syria enables countries like Saudi Arabia and other Gulf states to promote relations with Israel, to push for progress in negotiations with the Palestinians and to postpone negotiations on Syria until more favorable circumstances arise. The public pronouncement by the prime minister of Israel that the Golan Heights is not up for negotiation, however, precludes this option.

In his Golan declaration, Netanyahu not only put the kibosh on the Arab Peace Initiative, but also on UN Security Council Resolutions 242 and 338, which call for the territorial integrity and political independence of all the states in the region and recognition of their sovereignty and independence. These resolutions served as the basis for all negotiations between Israel and its neighbors, including the talks between Israel and Syria launched following the 1991 Madrid Conference (in which Deputy Foreign Minister Benjamin Netanyahu took part). The war in Syria and any diplomatic arrangement ending it will not change by one iota that the Golan Heights is an area under Syrian sovereignty. This principle regarding the territories captured by Israel in the Six-Day War of 1967 is enshrined in the 1979 peace treaty with Egypt, too.

On the other hand, Israel actually appears to adhere very closely to certain parts of Resolutions 242 and 338. For example, the promise of free movement along international shipping lanes. Defense Minister Moshe Ya'alon told military affairs correspondents April 12 that although the Saudis do not maintain official ties with Israel, they had promised to respect the Israeli-Egyptian peace treaty, under which the Straits of Tiran and the Gulf of Aqaba shall remain open to Israeli aircraft and sea vessels. It is to be hoped that the state that initiated the Arab peace plan, Saudi Arabia, will not apply Netanyahu’s famous rule regarding the imposition of Israeli rule on Arab territory — “If they give, they will get; if they don’t give, they won’t get” — and revoke Israel’s freedom of flight and shipping in response to Netanyahu’s provocation on the Golan Heights.