Several Egyptian lawmakers have demanded that action be taken against Abla Fahita, a puppet that stars in a popular Egyptian TV show, after she makes remarks critical of the parliament's performance. 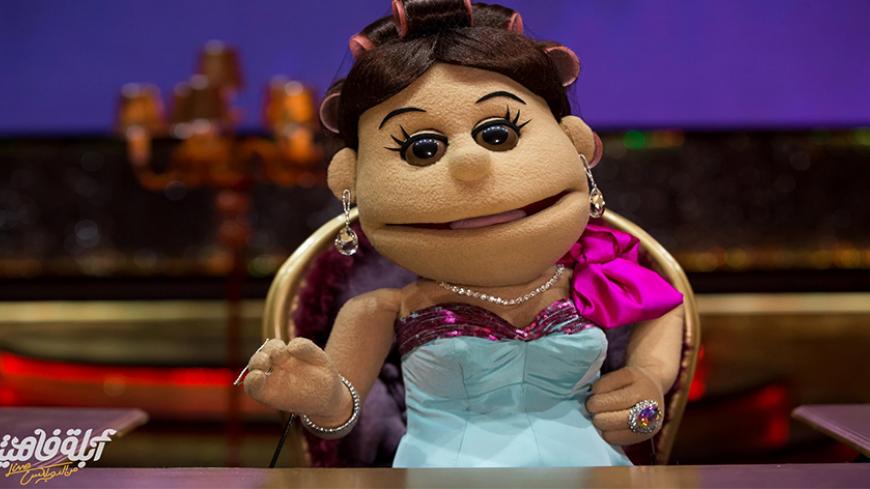 CAIRO — Anger spread through the ranks of Egyptian parliamentarians over criticism leveled against them by Abla Fahita, the puppet star of a CBC channel program. In the program, Abla Fahita described the parliament members using terms that they considered inappropriate, leading them to submit urgent motions April 17 for the government to discipline the program. It went so far as parliament members collecting signatures for an official memorandum addressed to the prosecutor general asking to bar the program and take the channel off the air.

Abla Fahita has often criticized the conduct of the country’s parliament, with the puppet presenter of the show describing parliamentarians as “defects” in a satirical song on the program’s April 7 episode. She maintained her criticism and attack on independent member of parliament Elhami Ajina during the show’s April 14 episode, following Ajina’s statements that he would submit an urgent motion to the government requesting that the program be halted and financial penalties imposed on Abla Fahita for denigrating members of parliament and accusing them of profiteering.

Yet, Ajina told Al-Monitor that he refused to sign the memorandum drafted by parliamentarians to halt the program, saying, "Parliamentarians are public figures, the criticism of which is a given right. I asked that the issue be dealt with objectively.”

The Egyptian parliament devoted its April 18 session to discuss Abla Fahita’s criticism of parliament members, with Speaker Ali Abdul Aal attacking television programs that criticize parliamentarians, “disparage members of parliament and go beyond freedom of expression.” The same session also saw the expulsion of parliament member Safwat Ghattas after he defended Abla Fahita and got into an argument with the speaker due to him taking the floor without permission, subsequently leading to a commission of inquiry, with Aal commenting that “in many of his articles, this member of parliament has defamed and slandered parliament and its speaker.”

Puppet Abla Fahita garners the largest viewership in Egypt for her program “Live from the duplex,” which compares to a great extent with Bassem Youssef’s satirical “Al-Bernameg” show, which was taken off the air for criticizing the Egyptian regime. In that context, Egyptians consider Abla Fahita, which airs at the same time slot formerly occupied by Youssef on CBC, to be an extension of Youssef’s show, which was also broadcast on CBC prior to it being canceled and moving to MBC Egypt, where it was again taken off the air. In addition, Abla Fahita’s show is recorded with a live audience at the Radio Theater, where "Al-Bernameg" was recorded; this is not to mention that the majority of its production crew, including writers, researchers and personnel, worked on Youssef’s old show.

As such, Youssef is considered to be Abla Fahita’s godfather, with the puppet’s first ever appearance on air taking place in one of the October 2013 episodes of "Al-Bernameg"; though the project’s agenda and those responsible for its implementation remain a mystery due to CBC’s efforts to maintain a level of intrigue meant to attract viewers. Abla Fahita first appeared on YouTube in 2010, with a song titled “Don’t worry Carolina, they’re only four years,” gaining widespread popularity in 2012. In the song the puppet sang to her daughter following Mohammed Morsi’s victory in Egypt’s presidential elections.

In that context, once the parliamentary crisis erupted, Ajina withdrew from attending the taping of Abla Fahita’s show despite having coordinated his appearance with the program’s production and writing staff. Ajina explained, “I received threats from my fellow parliamentarians that they would cease all dealings with me if I appeared on the program following its attack on parliament. Speaker Abdul Aal asked me not to attend the taping, as that would embarrass parliament and be construed as representing my consent to the show’s abuse and affront of parliamentarians.”

Ajina stressed that he wished to appear on Abla Fahita’s show in order to show the people that their members of parliament do not oppose satirical criticism as a form of freedom of expression, especially as he is a member of the Parliamentary Human Rights Committee. He said that parliamentarians are tasked with criticizing and overseeing the conduct of the government, and, as such, they also should be open to criticism as long as it does not exceed good taste and civility.

The Egyptian government’s stance vis-a-vis the parliamentary crisis and Abla Fahita remained unclear, with Minister of Legal Affairs Magdy al-Agaty asking during the April 17 parliament session, “What is required of the government with regard to this Fahita affair?”

Speaking to Al-Monitor, media expert Yasser Abdulaziz explained, “Professional norms were trampled by the conduct of the media in Egypt, and many mistakes were committed. Yet that should not necessitate the imposition of restrictions on the media. Parliament and its members would have been better served to shoulder their responsibilities and adopt media laws that regulate the sector instead of demanding that a media outlet be closed down for violating Article 211 of the constitution.”

Abdulaziz said that the Egyptian National Committee for the Formulation of Press and Media Legislation concluded drafting a unified press and media law, which stipulates the formation of the Supreme Media Council set forth in Egypt’s constitution, with said council tasked with overseeing media conduct and adjudicating claims, through an impartial technical assessment committee, related to any controversial content.

Concerning the Abla Fahita and the parliament crisis, and the possibility that the segment would suffer the same fate as Youssef’s show, Abdulaziz said, “The matter requires the formation of a specialized technical committee that would rule on parliament’s complaint against Fahita, due to the fact that a very fine line separates between satirically criticizing, as opposed to insulting the authorities.” In that regard, Abdulaziz published an article in October 2013 titled “Bassem Youssef’s test,” in which he asked Egyptian authorities to take whatever measures they deemed necessary to put Youssef on trial, without suppressing him or taking his program off the air.

Abla Fahita’s production team, which is following in Youssef’s footsteps, has lately acquiesced to the conditions set by the management of the channel and its financiers to refrain from criticizing Egyptian President Abdel Fattah al-Sisi, though that may not be the only measure guaranteeing its on-air survival.