By introducing the concept of "unarmed terrorists," Turkey’s president is resurrecting the old concept of "thought crime" that he used to oppose. 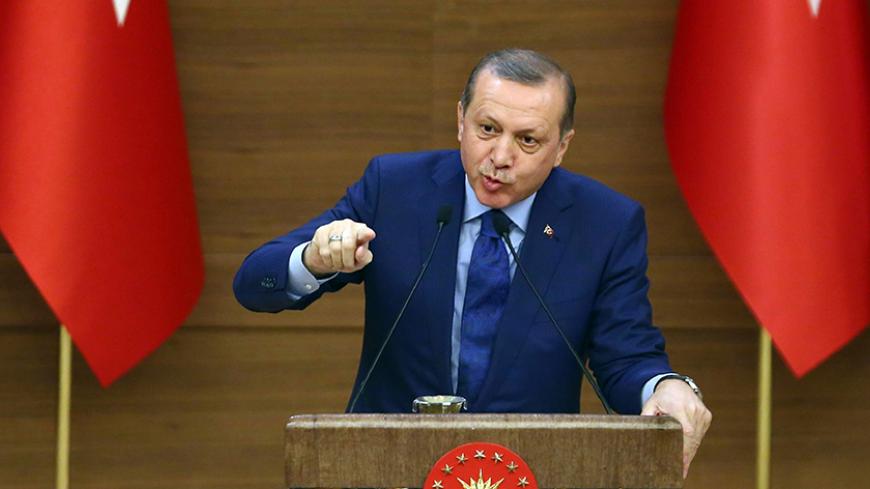 The latest suicide bombing in downtown Ankara that killed 37 civilians naturally shook Turkey and heightened the nation’s worries about terrorism. It also supported, especially for foreign observers, Turkey’s concern over the Kurdistan Workers Party (PKK) — and by extension, PKK-affiliated Kurdish forces in Syria, even if they are effective against the Islamic State.

However, the way President Recep Tayyip Erdogan responded to this terrorist attack was disturbing. The powerful president is using Turkey's troubles to take his increasingly authoritarian rule to new heights. His objective was evident in the speech Erdogan gave in Ankara on March 14, just a day after the deadly terror attack. He not only condemned the terrorists who use bombs and weapons to kill people, but also what he called “unarmed terrorists” who supposedly help them with their ideas. He said, “There is no difference between a terrorist with a gun and bomb in his hand and those who use their work and pen to support terror. The fact that an individual could be a deputy, an academic, an author, a journalist or the director of an NGO [nongovernmental organization] does not change the fact that that person is a terrorist.”

But how exactly would “a deputy, an academic, an author, a journalist or the director of an NGO” support terrorism? If an individual openly incited terrorist violence, calling for more bombings and other attacks, then Erdogan would be justified. However, it is clear that both Erdogan and his supporters have lately begun accusing people of “unarmed terrorism” for merely criticizing the government’s anti-terrorism measures.

Some 1,100 Turkish academics and foreigners, including intellectual activist Noam Chomsky, signed a petition in January titled “We do not want to be partners to the crime.” The short statement criticized the government for committing human rights violations in its counterterrorism campaign that is ongoing in certain southeastern towns. It blamed the government for committing “massacres” of Kurdish civilians and called for an end to all related security operations. While one could have criticized the text for being silent on the crimes of the PKK, it certainly had nothing to do with inciting terrorism or any other form of violence.

Yet Erdogan and his media loyalists ferociously condemned the academics as “terrorists.” Soon after the petition was released, dozens of them were detained by the police and some of them were fired from their universities, though public prosecutors released all the detainees after questioning. As of the beginning of this week, none of the academics were in jail. Their release apparently made Erdogan unhappy, for in the same speech about “unarmed terrorists,” he said, “We cannot tolerate those giving support to a terrorist organization going into a courthouse through one door and coming out right out of another.”

Alas, just a day after Erdogan's statement, three of those petition-signing academics were arrested and put in prison. They probably will be jailed for a while, and more may join them. Meanwhile, Chris Stephenson, a British academic teaching computer science at Istanbul’s Bilgi University, was detained by police for promoting “PKK propaganda” after distributing leaflets inviting people to Nowruz celebrations. He was soon released, only to be deported from Turkey, where he had been living for 25 years, with his Turkish wife and daughter.

It is worryingly clear that Erdogan’s very broad definition of terrorism also defines how the Turkish police and even the judiciary see the matter. But even this power seems not to be enough for the president, for he also called for legal amendments. “We should redefine terrorism as soon as possible and include this in the Turkish penal code,” he said in the same speech. “This is not an issue of freedom of press or freedom of organization. It is about a more effective way of dealing with the vile assailants who try to harm our people.”

Erdogan went even further, saying, “Certain segments of our society and in the international arena are at a crossroads. They will either be on our side, or the on terrorists’ side.” So merely not being on the government’s "side" could get one branded and prosecuted as a terrorist.

What Erdogan is doing is resurrecting the old Turkish concept of thought crime. For decades, the infamous penal code Articles 141, 142 and 163 criminalized communist, “separatist” or anti-secular propaganda. It was only thanks to liberal reformers such as Turgut Ozal, Turkey's former prime minister and president, that such draconian laws were annulled. Moreover, when Erdogan’s Justice and Development Party came to power in 2002, it vowed to advance the liberal agenda, which was also encouraged by the Europan Union. As a result, Erdogan and his party realized many legal reforms and also adopted a critical tone against the heavy-handedness of previous governments against Kurdish separatists and rebels. In 2011, for example, Erdogan gave a landmark speech defining the bloody crackdown of the Kurdish Rebellion in Dersim in 1937-38 as a “massacre” by the state, for which he offered an official apology as prime minister.

It is ironic that today the same Erdogan condemns academics who criticize the state — just as he once did — as terrorists who should be in prison. It makes one think that all the liberal agenda Erdogan and his supporters adopted in the early 2000s, when they were not yet the state establishment, was merely Machiavellian maneuvering. Once they took power, they began to adopt the very authoritarian habits they once opposed. And the worst news is that this may be only the beginning.