President Erdogan tells potential military leaders about his goal of becoming a functioning — not symbolic — commander-in-chief. 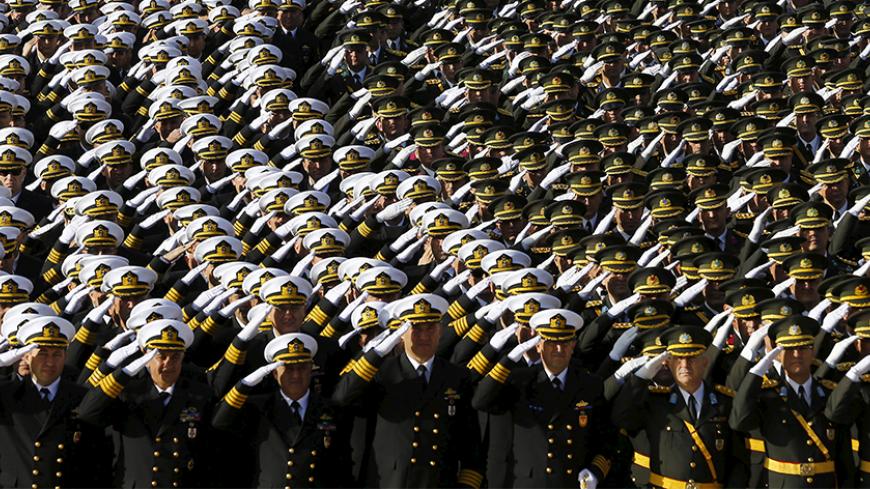 The War Colleges Command in Istanbul is the highest training and education institution of the Turkish Armed Forces (TSK). After a stiff examination and selection process, about a hundred staff officer candidates are selected from among thousands of applicants. They assemble in Istanbul every March to mark the beginning of their academic year.

It is a tradition for the president to make the opening speech to these selected officers, who are likely to constitute the Turkish military's future command. The speeches usually focus on national, global and regional security environments, and foreign relations. But this year and last, President Recep Tayyip Erdogan's speeches deviated from this template.

Last year, Erdogan’s speech was dominated by the anguish he felt about the mistreatment of hundreds of officers arrested on charges of involvement in the Sledgehammer and Ergenekon coup conspiracies. Prominent in his speech was his allegation that illegal branches of the Gulenist movement were behind these plots against the military. Erdogan was quoted as saying, “We, too, were deceived. I never approved the detention of soldiers, but there wasn’t anything we could do because of our respect for the word of the law.” In that speech, which was interpreted by the media as Erdogan’s apology to the military, he also expressed his faith in the "solution process" with the Kurds, asked for the TSK’s support for the process and called on the military to show “some patience with the PKK.”

“We cannot ignore the hopes of this nation because of some provocations, insolence and audacity. If there is a light at the end for a final solution, we have to pursue it," he said.

This year, however, his 45-minute speech on March 28 focused on the determined armed struggle against the PKK. Erdogan noted that since operations were launched in July against the PKK, Turkey had suffered 355 casualties, of which 215 were soldiers, 133 were police and seven were village guards. “In the same period, [Turkey] took out 5,359 terrorists — they were killed, wounded or captured. But this situation does not change the reality that the pain we feel for our martyrs will continue,” he said.

Standing out in this year’s speech was his reference to a "single army, single commander." Erdogan said the unity and chain of command of the TSK must be maintained at the highest levels.

“I am saying this at every opportunity: one nation, one flag, one country, one state. Today I want to add 'a single army, a single commander.' Article 117 of our constitution stipulates that the commander in chief cannot be distinguished from the overriding moral existence of the National Assembly and is represented by the president,” he added.

“Accordingly, as the commander in chief, all the officers here are my close colleagues. I have always said outright that each officer here is not any different from my own brother, my own son and close associates. There is no limit to my pride of having colleagues as brave, courageous, well-trained and loyal as you are. May God protect every one of you and give you strength in your work,” he said.

It is clear that Erdogan went beyond the usual rhetoric and was trying to set up a strong rapport with future commanders.

What raised eyebrows among the listeners was Erdogan’s deviation from the established practice of treating the "commander in chief" designation as symbolic, in practice allowing the prime minister and the general staff chief to handle security issues. For the first time, Erdogan used the term “executive commander in chief” — in other words, a functioning commander in chief.

Last year, Erdogan’s darts were aimed at the Gulenist movement. This year, the prime target was the West. He spoke of the hypocrisy of Western countries in combating terror. “No matter what we said, how much we warned, they didn’t listen. At the end, snakes started to bite them and the mines began to go off under their feet. Now you can see how those who chatter about democracy freedoms, rights and laws forget all about them when they get into trouble,” he said.

What would a content analysis of this speech by Erdogan tell us? First of all, in contrast to traditional speeches, this one was more emotional and congenial. Instead of telling the audience about global security and the TSK’s structural transformation, Erdogan wanted to relate the tough conditions he has to work under. By expressing his regret about the legal unfairness TSK personnel were subjected to, he appealed to the hearts of these young officers.

It is also possible to interpret his first-ever reference to an "executive [functional] commander in chief" was a message to future commanders that the president is not going to remain as a mere symbol but will be the "real boss." We have to remember that current Chief of General Staff Hulusi Akar was in the audience.

Erdogan’s harsh criticism of Western countries and their "hypocrisy" in combating terror — while he did not even refer to Russia — did not go unnoticed.

This "executive [functional] commander in chief" concept is likely to become a key issue in the next presidential campaign.