UN Syria envoy Staffan de Mistura said he planned to resume proximity talks between the Syrian government and the opposition on a political transition starting March 14. 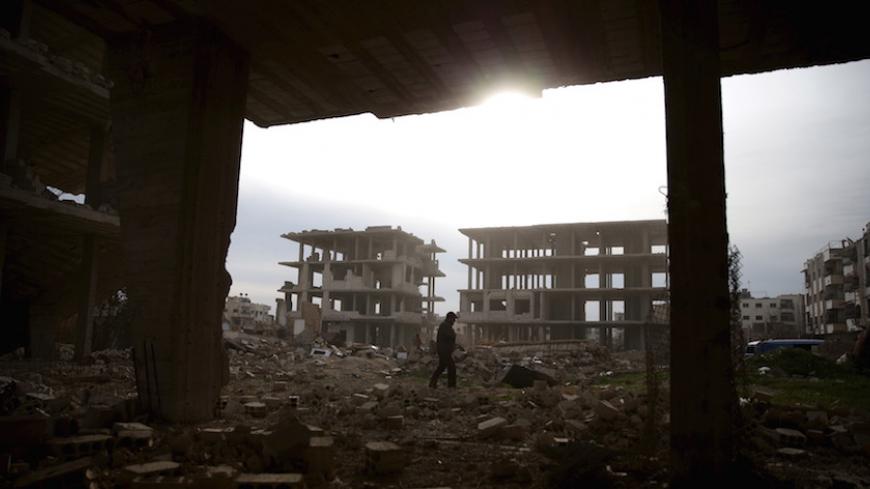 A man walks on the rubble of damaged buildings in the rebel-controlled area of Jobar, a suburb of Damascus, March 2, 2016. - REUTERS/Bassam Khabieh

WASHINGTON — With an 11-day-old partial truce having dramatically reduced if not ended violence in Syria, UN Syria envoy Staffan de Mistura said he planned to resume proximity talks between the Syrian government and the opposition on a political transition process starting March 14. The intra-Syrian talks, to be held at the UN Palais des Nations in Geneva, could last up to 10 days, he said.

“When we start having the talks on Monday, God willing, the focus will be on substance, on the agendas — in other words, on new governance, constitution and elections, the future elections in 18 months’ time, both presidential and parliamentarian,” de Mistura told journalists March 9 in Geneva.

“At the end of the day, the cease-fire and humanitarian aid alone are not a solution,” de Mistura said. “The solution is a political transition in Syria, facilitated, made credible to the Syrian people by incremental humanitarian assistance, and an incremental, more or less sustainable … and — quite unbelievable after five years of war — cessation of hostilities or reduction of hostilities. That’s basically the plan.”

While the Syrian opposition High Negotiations Committee (HNC) had not yet formally replied if it will attend, there were signs March 9 that it probably would. The fact that the agenda for the intra-Syrian talks that de Mistura outlined would “start with discussion of the matter of political transition” is positive, HNC spokesman Salem al-Muslat told Reuters.

The State Department also encouraged the opposition to attend, to negotiate on the form and composition of a transitional governing body that would preserve Syria’s government institutions and avoid state collapse.

“We want the parties to work this out,” US State Department spokesman John Kirby told reporters at a press briefing March 9. “We always recognized that there would be some transitional structures in place as [we] go from the regime to post-regime government. What it looks like — whether you call it a unity government or transition government — we the US have not laid out a policy on that.”

“We want to make sure that the key institutions, the key functions of a government are at least preserved in some form or fashion,” Kirby said. “You need to have some security forces in place. That is obviously critical to an increased sense of stability. What other institutions look like … all that has to be ironed out. That is why it is so important the talks in Geneva get started.”

US Syria envoy Michael Ratney will lead the US delegation in the intra-Syrian talks, though the United States is not a direct participant.

“As of March 8, 10 UN convoys comprising nearly 300 trucks in total had provided emergency humanitarian assistance to about 225,000 people,” Ratney said in a statement March 9. “But there is still much work to be done and more priority locations to access.”

De Mistura, noting that he had to suspend the first round of intra-Syrian talks he attempted early last month only days after they began, said that in the intervening five weeks that the United States, Russia and other international players had increased their cooperation on humanitarian aid deliveries and in trying to implement the Syria cease-fire.

“We’re having a whole surge of UN colleagues who are actually helping us to make sure that we are going to be able to handle … simultaneously … the proximity talks … two task forces — one humanitarian and one on the cessation of hostilities — [the] cease-fire and, as you know very well, a never-seen-before operations center, where we have Russians, Americans and the UN monitoring, observing and trying to check and keep track of the cease-fire.”

The various delegations to the Geneva talks will arrive staggered over the next few days, the UN envoy said.

“We have people coming tomorrow [March 10]. We have people coming on Sunday [March 13]. There will be anyway on Saturday quite a few too, but then we plan to start having informal talks already in hotels or here, with whoever is arriving,” he said. “But the substantive, deeper part of it, after the first preparation, will be on Monday, God willing, the 14th. They will last not beyond the 24th. We believe that having a timetable and a time limit is healthy for everyone, so we don’t think that we can go on [with] procedural discussions for two weeks hoping to get into substance — we go seriously into substance as soon as we can.”

Bassam Barabandi, a former Syrian diplomat in Washington who supports the opposition, said while the opposition appreciated the reduction in violence, it wanted the United States to be far more active in pressing Russia and the regime on alleged violations of the truce, including an alleged airstrike on a market in Idlib on March 7 that killed over two dozen people.

“The Syrian opposition really needs the Americans to have something to give them credibility,” Barabandi told Al-Monitor on March 9. “We would like them to be very aggressive.”