Iran poised to exploit the declining fortunes of the Palestinian Authority as Israel expands West Bank settlements; Syrian government forces prepare for a showdown in Raqqa; The Washington Post refers to Jaish al-Islam as a "rebel" group; Al-Monitor Syria Timeline includes commentary from Ambassador Ryan Crocker and others. 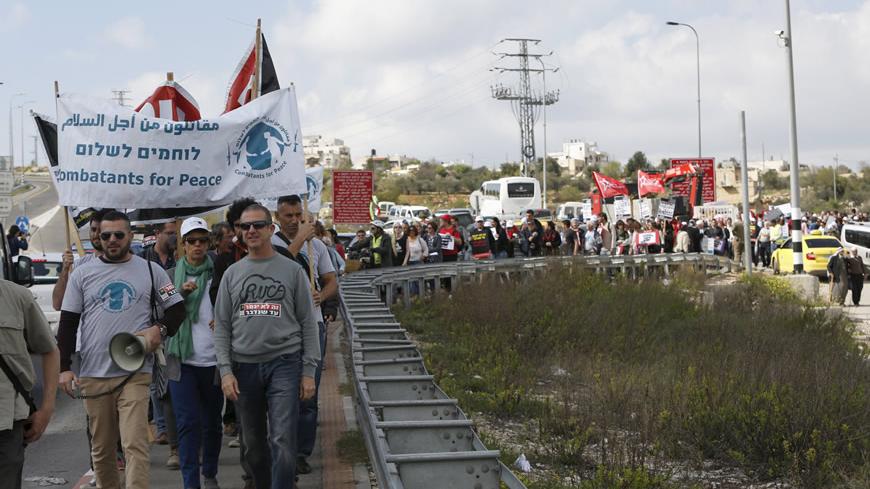 Palestinian and Israeli activists take part in a demonstration calling for a better future for both people and ahead of the annual International Women's Day, in the West Bank city of Bethlehem, March 4, 2016. - REUTERS/Mussa Qawasma

Iran may be poised to exploit the continued divide in relations between the Palestinian Authority and Hamas, as the PA shows further signs of strain and the prospects for an Israeli-Palestinian two-state solution seem increasingly unlikely.

Daoud Kuttab suggests that a two-state solution may be all but dead, absent a massive international diplomatic intervention. Israeli Prime Minister Benjamin Netanhyahu’s “unconditional support” for expanded settlement construction in the West Bank, including in an area known as E1, would cut off the north and south of the West Bank from one another. “Palestinian officials have often repeated the statement that the two-state solution is dead or almost dead. The E1 settlement possibility is clearly one tangible case in which such a claim can be physically checked out and proven to be truly detrimental to the potential of an independent and interconnected Palestinian state,” Kuttab writes.

Akiva Eldar laments that Morocco’s decision not to host the Arab League summit this year is another sign of the missed opportunity offered by the Saudi-brokered Arab Peace Initiative of 2002. Kuttab proposes that “an international effort to replicate the Iranian agreement process and solve the intractable Israeli-Palestinian conflict might work if there is seriousness behind the French effort and if Washington is willing to spend political capital to make it work.”

The PA’s fortunes are directly linked to the prospects for peace. Adnan Abu Amer reports that donor support for the PA is “going downhill.” He writes, "On Sept. 29, the World Bank expressed concern that the continued decline of international assistance to the PA would cause instability and political conflict. If a Palestinian state fails to emerge, stuck in a political dead-end with Israel, then international decision-makers will find it difficult to convince their constituents of the need to continue financing the PA, leading to the latter’s gradual inability to carry out its duties, services and administrative responsibilities to the Palestinian populace and its ultimate collapse.”

Meanwhile, attempts to reconcile Hamas and the PA continue to flounder. Abu Amer reports that Qatar tried and failed to broker a deal between Hamas and PA leaders in Doha last month. Hazem Balousha writes that Hamas’ links to Egypt’s Muslim Brotherhood could be under strain after the Jordanian Brotherhood’s Shura Council broke ties with the Egyptian branch last month. Balousha writes, “It seems that Hamas is not about to announce any fundamental change in its ideology or links to the Muslim Brotherhood because it believes the region is in crisis and would thus prefer to wait until these crises are resolved and choices have been made.”

Asmaa al-Ghoul reports from the Gaza Strip that “initiatives” by political leaders have become excuses for inaction, rather than calls to action. Ghoul writes, “These political initiatives, which have engulfed the Palestinian political action, did not solve the accumulated crises in the Gaza Strip crisis — reconciliation is stalled, electricity is cut for more than 12 hours a day and the Rafah crossing remains closed and is only opened at intervals. All of this makes the initiatives seem like a mere public show.”

Iran, meanwhile, seems poised to enhance its own position as a broker or spoiler on the Israeli-Palestinian fault line, a trend we have been covering in this column and in Palestine Pulse for over three years. Back in November 2012 we wrote, “Iran revealed that it has the wherewithal to shift the equation and provide some payback [in Gaza], even in those areas where its adversaries allegedly hold sway.”

Shlomi Eldar reports that Iran’s ambassador to Beirut has shrewdly offered aid and support to the families of Palestinians who died committing attacks against Israelis. “It looks like Iran understands that what is happening now in the PA will have far-reaching, significant consequences. A full-blown intifada could shift priorities abruptly, and if Iran stakes a claim in the West Bank, it could influence the character of Palestine on the very next day,” Eldar writes.

Eldar reviews Iran’s record of support for both the PA and Hamas. “Iran’s interest in the region and its involvement in the Palestinian-Israeli conflict are nothing new, and Iran's past behavior gives some indication of the way it thinks,” he writes. “Iran is trying yet again to get a foothold in the West Bank. Its money will probably not go into the PA’s coffers, since the government is considered to be collaborating with Israel. Rather, it will go to individual families through Islamic welfare institutions that assist Palestinians in the occupied territories. These institutions tend to be identified with Hamas and operate freely throughout the West Bank. Even when Hamas' relations with Iran chilled following the outbreak of the Syria war, Iran continued supporting the groups. Iran's generosity will make life much easier for the institutions and strengthen their influence across the West Bank. Therefore, while Abbas certainly understands the significance of an Iranian foothold in the territories, he is utterly unable to take on these “charitable” organizations.”

Khaled Atallah reports from Damascus that Syrian military and allied forces have pressed an offensive against the Islamic State east of Hama.

Under the agreement for a cessation of hostilities in Syria negotiated last month, attacks are still permitted against IS and Jabhat al-Nusra, al-Qaeda’s affiliate in Syria. Both the Syrian government and Syrian armed groups have blamed each other for violations of the agreement, but the sides are otherwise respecting the Feb. 27 agreement.

“In terms of the forces participating in the battle alongside the Syrian army, he [Jamal Hazouri, a war correspondent accompanying the Syrian army forces] noted that hundreds of young people from the tribes of Raqqa and Deir ez-Zor are taking part in the battle, fighting under the banner of the national defense forces. These forces consist of a militia formed by the regime to include young volunteers, be they Syrians or foreigners. They have been fighting alongside the army since the beginning of 2013,” Atallah reports. “The Raqqa battle is still relatively far away if we look at it from the perspective of distances that the Syrian army would have to cross. But from an ambitious perspective, it has become imminent.”

Jaish al-Islam is not a “rebel” group

The Washington Post reports on March 5 that the “powerful rebel group Jaish al-Islam” released a statement claiming that “the cease-fire had failed to stop pro-government advances, including near the rebel group’s stronghold east of Damascus, the capital.”

Sorry, Jaish al-Islam is no “rebel” group. This column has repeatedly called for clarity in reporting about armed groups operating in Syria. Jaish Al-Islam is a foreign-backed, jihadist entity fueled by an ideology of sectarian bigotry and hatred that mirrors that of Jabhat al-Nusra and IS. It militarily collaborates with Jabhat al-Nusra and that may be why it is the target of recent attacks. If so, we say let it be. Syria is better served when Jaish al-Islam, like Jabhat al-Nusra and IS, are driven out of Syria for good. Labeling Jaish al-Islam fighters as “rebels” is both inaccurate and a disservice to the many Syrians among the opposition who seek a unified and nonsectarian future for their country. Ali Mamouri analyzed the hate-filled ideology of former Jaish al-Islam leader Zahran Alloush. It is worth reading again.

Julian Pecquet this week presents a timeline of the perspectives of US officials on US policy toward Syria.

He writes, “At the root of the Obama policy's failure, argues former Ambassador Ryan Crocker, was the mistaken impression that Bashar al-Assad would be as easy to dislodge as other dictators felled by the Arab Spring. As ambassador to Syria, Crocker had formed firsthand impressions of the Syrian regime's "near-perfect police state" in one-on-one discussions with the future Syrian leader in the late 1990s, but no one in the administration asked for his opinion before announcing that Assad had to go. "It's Diplomacy 101: Never set a policy if you don't have the means to achieve it," Crocker told Al-Monitor. "That was a policy based on hope, which we all know is a fairly idiotic concept."