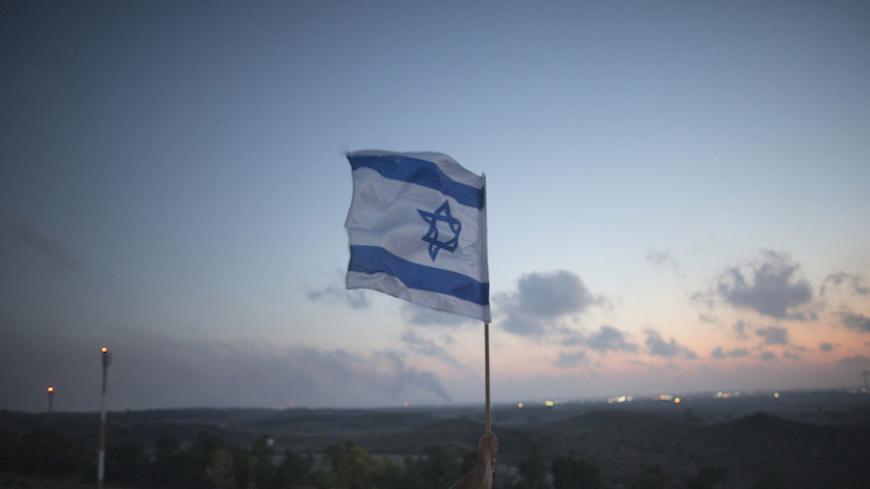 An Israeli man holds up a flag atop a hill overlooking the Gaza Strip in the southern town of Sderot, July 20, 2014. - REUTERS/Ronen Zvulun

If Israelis could participate in the Republication primaries in the United States, Donald Trump would likely win a considerable number of votes, according to two comprehensive public opinion polls published recently. The Peace Index published by the Israel Democracy Institute on March 6 shows that a majority (61%) of the Jewish public thinks that Trump’s positions are very friendly or fairly friendly to Israel. At best, they are unaware of Trump’s racist views on minorities like Muslims and immigrants. At worst, they do know them and admire them.

The experts at the American Pew Research Center, which surveyed 5,601 Israeli adults between October 2014 and May 2015, found that almost every other Jew (48%) agrees or strongly agrees that Arabs should be expelled or driven out of Israel; 46% opposes or strongly opposes this racist idea, which bears strong resemblance to the messages Trump preaches. According to these two new polls, we can certainly assume that human rights defender Russian President Vladimir Putin and knight of democracy Turkish President Recep Tayyip Erdogan would have gotten much better results at the voting booths than the leaders of the Israeli center and left, Zionist Camp leader Isaac Herzog and Meretz Party head Zehava Galon.

According to the Pew survey, among Jews who define themselves as religious, the percentage of transfer advocates reaches 71%, among the ultra-Orthodox it’s 59% and among traditional Jews it’s 56%. A significant majority of secular Jews, 58%, opposes the expulsion of Arabs. But in 2013, only 43% of Jews defined themselves as secular. The demographics do not bode well for them. Of ultra-Orthodox parents 40 and older, 28% have at least seven children, compared to 5% of religious parents of these ages and 2% of traditional parents. In contrast, only one secular family out of a hundred has seven or more children. In addition, Israeli Jews who had at least one parent arrive with the large waves of immigration from the former Soviet Union in the 1990s are more religious than their parents: 70% of the first-generation immigrants say they believe in God, compared to 55% of immigrants themselves.

The Pew survey includes other data that testify to a racist trend in Israeli society: 79% of Jews believe they deserve favorable treatment compared to non-Jews. The explanation can be found in another finding, according to which most Israelis (60% of those who live within the Green Line and 85% of West Bank residents) believe that God gave the Land of Israel to the Jewish people. According to this logic, if God gave the land to the Jews, the Jewish state cannot be considered as occupying another people. Like the Americans say, if it ain’t broke, don’t fix it. If there’s no occupation, there’s no need to deal with its moral implications or to give up assets in order to end it. All that remains is to defend the Jewish home.

Indeed, the Democracy Institute survey found that 56% of Jews side with the claim of former Foreign Minister and Chairman of Yisrael Beitenu Avigdor Liberman that the current wave of terror continues because of Prime Minister Benjamin Netanyahu’s kid-glove approach to the Palestinians. In contrast, every other Israeli doesn’t agree with the position of Chief of Staff Gadi Eizenkot that we should act with restraint in using military force to quell the current wave of terror and the recommendation of Chief of Military Intelligence Herzl (Herzi) Halevi to ease the economic situation in Gaza and the West Bank. There’s a deep consensus among the Jewish public (90%) that the means the Israel Defense Forces (IDF) uses today to stop the wave of terror are very or somewhat moral. It seems that the saying repeated by generations of political and military leaders that “the IDF is the most moral army in the world” has taken root among all elements of the Jewish public in Israel.

Likewise, since God, as noted in the Pew survey, has given all of the Land of Israel to the Jews, international criticism of the State of Israel, which as we know focuses on the evils of occupation, is unjustified. A vast majority of respondents to the Democracy Institute’s survey (90%, including 53% of Meretz voters) agrees with the statement, that the world’s criticism of Israel’s conduct today in its fight against terror is not justified. Many of them certainly believe that this criticism is touched by anti-Semitism. According to the Pew survey, more than three-quarters of Jews in Israel believe that anti-Semitism is widespread and even on the increase around the world, and 91% say that a Jewish state is necessary to the survival of the Jewish people in the long term.

Political psychologist professor Daniel Bar-Tal told Al-Monitor on March 6 that the view that “the whole world is against us,” like the other phenomena and trends illustrated in the Pew survey, stem from several axioms that have been instilled in the Jewish public in Israel since the creation of the state in 1948: the Land of Israel is the homeland of the Jewish people, which suffered in the Diaspora — and the state established here is the only state that ensures its survival; the state is surrounded by hostile Arab nations who do not and will not accept the presence of the Jewish state in the region; the Palestinian people do not want peace; and the Palestinian leadership is not prepared to make significant compromises and has missed all opportunities to reach an agreement. Therefore, given the character of the Arabs, we should refrain from any move that entails danger or uncertainty, including the advancement of peace. The prevailing worldview is that in a reality of permanent threats and dangers, maintaining personal and collective security trumps keeping moral and democratic values.

The bad news that comes out of the surveys, says Bar-Tal (who defines himself as a left-wing Zionist), is that no more than 8% of respondents defined themselves as “leftists,” compared with 37% who defined themselves as on the right. The good news, as he sees it, is found among a majority of Jewish Israelis (55%) who define themselves as centrist: Most of them are secular (62%), but not a few are ultra-Orthodox (52%), traditional (49%) and religious (41%). “Not all is lost,” concludes the senior psychologist of Israeli society. “With the center, you can work on the idea of peace, but the time is very short, and the work is vast and very difficult.”