Activists in Lebanon have launched a new website to help women confronted by sexual harassment and bring discussion of it into the public sphere. 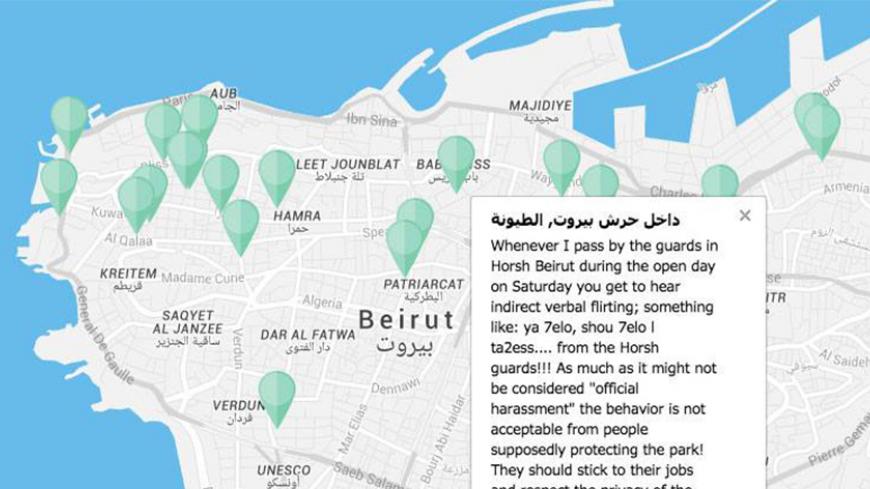 Nay el-Rahi and Myra el-Mir in Lebanon, and Sandra Hassan, based in France, have been involved in defending women's rights through professional and personal work with associations such as Kafa, a feminist nongovernmental organization focusing on gender-based violence, and Nasawiya, a feminist collective that ceased operating at the end of 2014. The launch of HarassMap in Egypt in 2010 was the three women's main inspiration for their initiative, the first of its kind in Lebanon.

“The website is a tool to primarily track and document harassment in Lebanon,” Rahi, who is in charge of content, explained to Al-Monitor. “We would like to document what's happening in the streets of Lebanon in order to use it as data to lobby certain political entities for some changes, like lighting, the sidewalks, etc., over concern for the general safety of people.”

Another goal is to redefine perceptions of sexual harassment and get to the point where it can be discussed in the public sphere without shame. “We hear a lot about people trying to define what is and what isn't, in their opinion, sexual harassment,” Rahi said. “Like when people say, ‘He was trying to hit on you! It's a compliment! Why don't you chill?’ — it is a habit of blaming the victims and defining things for them.”

This desire to raise the issue of sexual harassment in public stems in part from personal experience. Rahi commented, “As a woman living in the city, it's very hard not to feel the need to do something about harassment, you feel it every day, as well as this weird common agreement between people to normalize it, not to react to it.”

Sexual harassment is indeed a common reality for many women on the street in Lebanon. Amnesty International reported in February on Syrian women refugees' fears of being sexually harassed, and this seems to be a similar concern among Western and Lebanese women, such as Jay (not her real name) from Beirut.

Jay told Al-Monitor, “I remember, I was 16 years old, walking down the street once, and this man followed me home, ‘complimenting’ my uterus, vagina, boobs, ass, etc. So I stopped and made sure he saw my Swiss knife and that I was not afraid to use it. Another story is a bit shocking. I had an urgent meeting and stopped a service [collective taxi] heading to Ashrafieh. The driver was an old man, and the cab was full, so I had to sit in front, which I never do, but he looked harmless. After all the passengers had got out; he complimented my perfume, so I thanked him politely, and then he rubbed his hand all over my thigh. I managed to tell him my thoughts before opening the door and jumping onto the highway.”

Similar experiences with service drivers are common in the testimonies of women, like one by Elizabeth (a pseudonym), a young North American woman who spent almost two years in Lebanon. She admitted, “[I was] terrified at first to take a service, because a lot of drivers harassed me, touched my legs, and I had to jump out once because he was touching my thigh.” She also had the experience of a man in his car asking for directions as she was walking and then revealing to her that he was masturbating while talking to her. In addition, she has had men cat-calling her and taking pictures of her legs.

In the face of such aggression, the creators of HarassTracker say their larger agenda is connected to violence against women with the hope it can lead to improving the legal framework to address it. “You can never convict someone of harassment unless you provide proof, so the burden falls on the victim,” Rahi said. “It is difficult to find a witness. Often the witness is an accomplice or refuses to talk or doesn't even see it as harassment. When people ask why a lot of women are not active in the public sphere, this is the answer. It's a real issue.”

In fact, none of the women interviewed by Al-Monitor has ever complained to the police. Jay argued, “In this country, a woman is considered as half a man. People won't trust what I say. I have no rights.”

Another young woman, Nour (also a pseudonym), told Al-Monitor, “There are not enough laws to protect women against sexual harassment. A lot of girls are victims of it by their own family members and never talk about it. Kids should be made aware of this issue at school from the beginning, and the laws have to change.”

Articles 503 and 507 of the Lebanese penal code, inherited from the French mandate in 1943, penalize forcing another person to have sexual intercourse or perform an indecent act outside marriage. These, however, are the only references to sexual harassment and are not explictly expressed as such, and carry the obligation of presenting a witness. Associations and institutions like Kafa and the Lebanese Council to Resist Violence Against Women provide care and counseling to women confronted by violence, including providing safehouses in cases of marital violence, but are not able to sufficiently assist them on a legal level.

Nour confided how she had experienced shame after being touched by a stranger in a service when she was 19. She remembered, “I told no one what happened that day, not even my parents. I was feeling so shameful. Later on, I understood that the shame was not mine to feel, but his. It was not my fault.” Allowing women to express what happened to them anonymously is one of the purposes of HarassTracker as well as applying words to the act of harassment.

“It is empowering to say that happened and that was sexual harassment,” Mir, the website's designer, told Al-Monitor. “Even if there is a doubt, nuances, you can at least make other people understand. At least we can change things a bit to make people start talking. People don't go to our website only to denounce a harassment, they visit too. So it's always positive, even though it's not going to make the situation evolve right away,” said Mir.