Will Israel revive its relationship with Khartoum?

Recent statements by Sudanese senior officials indicate that the country might be interested in the same kind of relations Israel has with South Sudan – especially relating to arms deals. 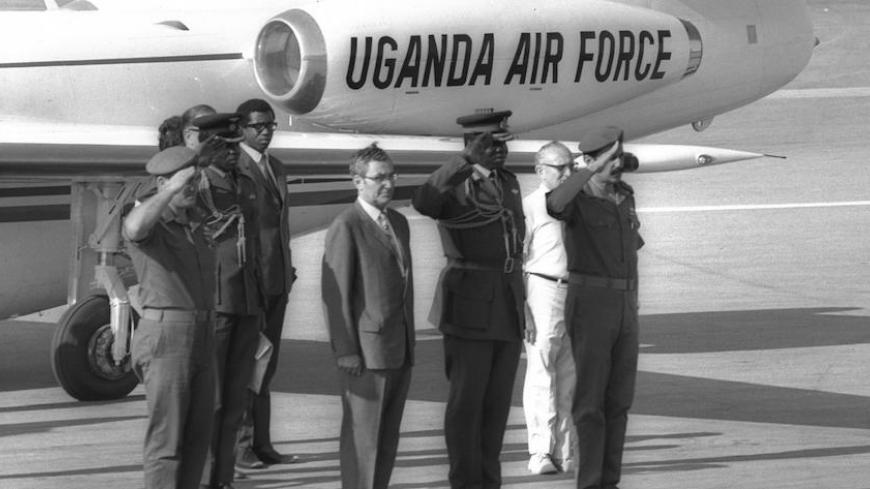 With the so-called knife intifada exacting its toll of Jewish and Palestinian blood every few days, Israel is not happy with the voices currently emanating from Arab capitals. But suddenly, among the raucous condemnation of the injustice of Israel’s occupation, a melodious tone was heard from a Muslim capital. Sudanese President Omar al-Bashir told the Saudi newspaper Al-Okaz March 14 that “even if Israel had conquered Syria, it would not have inflicted the destruction taking place there right now, would not have killed the number of people killed so far and would not have expelled people the way they are being expelled now.”

The comments by the Sudanese leader, who is wanted on suspicion of war crimes, were obviously directed first and foremost against Syrian President Bashar al-Assad. Over the past two years, Bashir has formed a new alliance with the Saudi-Sunni axis to replace his love affair with Shiite Iran, Assad’s patron. Nonetheless, it is not every day that Israel rates a positive mention from the leader of a state that dabbles in sending weapons to Hamas and other factions in the Gaza Strip.

This is not the first time that Khartoum has eyed Jerusalem, while setting its sights on Washington. Like many, the Sudanese apparently believe that Jews control the world and they can influence the Americans to help other countries. At a conference held in Khartoum in January — as part of the national dialogue meetings, aimed at reconciling the armed militias — it was suggested that Sudan’s hostile policy toward Israel was damaging its ties with the United States. Foreign Minister Ibrahim Ghandour said in response that he was willing to examine the issue of normalizing relations with Israel.

Israel is following the messages from Sudan with curiosity, but is careful not to get too close. Prime Minister Benjamin Netanyahu and Defense Minister Moshe Ya'alon are quietly awaiting a signal from the United States in regard to relations with Khartoum. But as often happens in Israeli politics, a diplomatic rookie who was given a senior post, blabbed and provided the missing pieces of the puzzle. Deputy Defense Minister Eli Ben-Dahan said in a Jan. 26 interview with The Times of Israel, “We don’t have to be different than the entire Western world. The Western world — the US and Europe — have relations with Sudan, and with Saudi Arabia and other countries. I don’t think we need to be any different.” According to Ben-Dahan, Israel “can contribute a lot to Sudan, in many areas.”

The deputy minister of defense was probably not talking about supplying drip irrigation systems, which Israel exports to many African countries. Israel is known in Sudan as a supplier of weaponry and surveillance equipment to South Sudan. Sudanese generals who crossed the blurred lines between the various militias and ethnic groups brought with them as dowries made-in-Israel rifles and surveillance tools. Khartoum’s signals of rapprochement to Israel, along with reconciliation moves between the Muslim state and the Christian neighbor to the south headed by dictator Salva Kiir, will enable international arms industry and weapons traders, including those of Israel, when the time comes, to enjoy the best of both netherworlds: those of war criminals and genociders in Sudan and of murderers from South Sudan. It will happen the day the Western world decides to lift the barrier of sanctions.

In the meantime, the arms embargo by the European Union on South Sudan is still valid, as is the decision by the United States to suspend weapon's export to that country. A year ago, the United States initiated a UN resolution proposal at the Security Council, to place an arms' sale embargo together with other sanctions on both sides, unless they stop the mutual bloodshed.

The report by the panel of experts published on Jan. 22 by the UN Security Council’s South Sudan sanctions committee provides a glimpse of the bloody cauldron that Israel is also stirring. It reveals that Israel provides South Sudan with intelligence collection tools that enable the administration to track its opponents and to take action against them. The document includes photos of soldiers armed with ACE assault rifles that are produced in Israel, an advanced version of the Israeli-made Galil rifle. According to the report, the rifles were used by a militia, trained at the farm of President Kiir, in a December 2013 massacre and attack against the Nuer tribe, in which many civilians were killed — an episode marking the start of the civil war.

The fact that Israel sold South Sudan weapons before the 2013 civil war is not disputed; still, Israel stopped sending South Sudan lethal firepower at an early stage of the fighting. Nevertheless, the panel of experts determined that Israeli micro-Galil rifles reached South Sudan in 2014, having been sold to Uganda that sold them to South Sudan. Even if Israel — as it claims — was unaware of the deal between Uganda and Sudan, it is not exempt of moral responsibility for it. Israeli attorney Itai Mack, who is active in efforts to increase public supervision of Israeli arms exports, told Al-Monitor that he had found that Israeli experts come and go in South Sudan.

An end to the all-out war taking place in Sudan and South Sudan is nowhere in sight. Mack said that Jerusalem would do well to heed the recommendations of the UN panel of experts to impose a total arms embargo on defense exports to South Sudan as a call to stop military aid to South Sudan, and to refrain from forming new military ties with Khartoum. The weapons that according to past reports Israel sold to nefarious regimes, such as that of South Sudan, could be used to carry out crimes against humanity and war crimes. That was the case with other weapons, including Israeli ones, that circumvented the embargoes on Rwanda, Bosnia, the Ivory Coast and Liberia. Israeli relations with Sudan could hurt the efforts of the international community to bring to an end the conflict in Sudan and to bring Bashir to trial in The Hague over his involvement in the genocide in Darfur.

In July, Israel will mark with great fanfare the 40th anniversary of the Entebbe operation, popularly known as Operation Jonathan, after Benjamin Netanyahu’s brother, a member of the Israeli commando unit who was killed there in the hostage rescue. On this festive occasion Israel would do well to remember that Jonathan "Yoni" Netanyahu was killed by a soldier of then-Uganda leader Idi Amin. Amin, at one time Israel’s best friend in Africa, subsequently became an ally of Libyan leader Moammar Gadhafi. Who knows, maybe the soldier who killed Yoni was trained using Israeli weapons at an Israel Defense Forces base. It is regrettable that Israeli political and security echelons have not learned yet the lesson of not playing with fire with nefarious regimes.