Is Turkey doing enough to protect its Protestants?

Turkey's small Protestant community feels threatened not only by detractors, but also by the Islamic State, and lacks government protection against either. 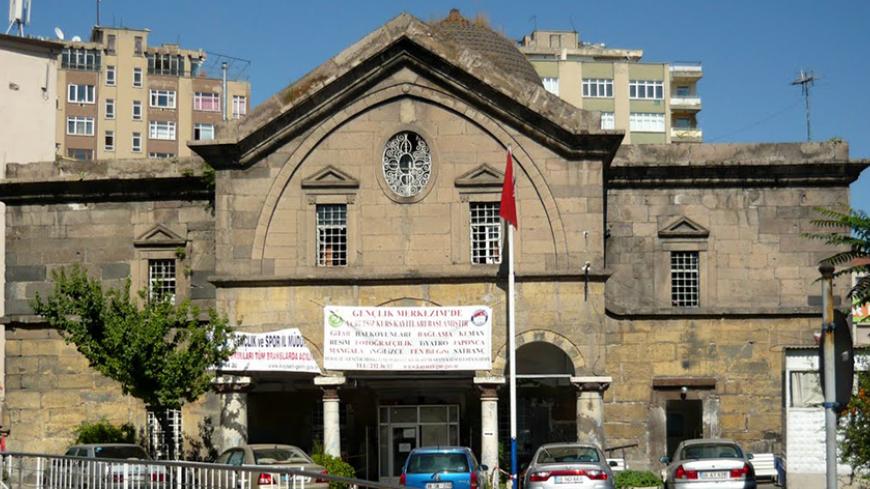 A report by the Turkish Protestant Churches Association alleges that the government in the town of Kayseri refused local Protestants' request to hold services in the historic Meryem Ana Church, Sept. 7, 2011. - Panoramio.com/Ismail Bjk

For Turkey’s tiny Protestant community, 2015 was a year marked by threats and attacks against their churches and leaders. A report by the Protestant Churches Association on human rights violations documents a series of attacks and obstacles that Protestants faced over the course of last year, including physical attacks and verbal harassment. Judicial authorities showed no compunction to respond to their complaints about such offenses. In addition, the government excluded the community from its meetings with religious minorities. In the words of community leader Ihsan Ozbek, Turkey’s Protestants are today an “anxious and distressed” community.

As a testament to the community's standing, on the door of the local Protestant church in the city of Balikesir, someone posted a piece of paper bearing the words “Turkish Islam Alliance” and painted “Allah is one” on a wall of the building. In Samsun, a stick-wielding man showed up at the door of the Agape Church, shouting obscenities and threats, and in Ankara, a man insulted and struck the leader of the Batikent Church. In Izmir province, an assailant opened fire on the pastor of the Torbali Baptist Church as he and his family worked in the field at his farm. The complaint the pastor filed with the police yielded no action being taken. The same went for complaints lodged following the other incidents.

Last August, 15 churches and 20 church leaders received threatening text messages and emails. Due to the language used in the messages, suspicion fell on the Islamic State (IS), but again, the community’s complaints ran into a dead end. Shortly afterward, two would-be IS suicide bombers were apprehended in Ankara, and footage from security cameras revealed that they had conducted surveillance at churches in the capital, potential targets for their foiled plans. Despite such serious threats, church leaders remain without protection.

Protestants also face obstacles in opening places of worship. According to the report, Protestants in Kayseri had requested the use of the historic Meryem Ana Church, which had been used as a sports hall in the past, but their request was denied. In Ankara, a local municipality had initially allocated Protestants a plot on which to build a church, but the move was struck down by higher government authorities, who instead designated the plot for the construction of a mosque.

Turkey’s Protestants still lack an official church. To circumvent this problem, the community has organized around associations and uses association buildings and offices as places of worship. At the moment, the Protestants have one foundation and 35 associations with 18 branches. Regardless, they are still not officially recognized by the state as a “religious community.”

The lack of official places of worship has led to the spread of fallacies about the religion and campaigns targeting its adherents. The young assailants who slit the throats of three Protestants at a publishing house in Malatya in 2007 said in their confessions that they had become upset after hearing that there were 49 so-called house churches operating in the city. This overblown, alleged secrecy had long been manipulated by the media and nationalist and Islamist circles, putting Protestants in danger. The trial involving the Malatya murders has dragged on, still inconclusive after 109 hearings.

Violations of Protestants’ right to proselytize were also cited by the report. Information booths on the street have been destroyed, and authorities often even deny permission to set them up. Protestants also claim to have been prevented from celebrating Christmas on “security grounds.”

All minorities in Turkey face hate speech, physical and verbal violence, and obstacles to their right to organize and acquire legal status. Protestants, it seems, suffer a bigger share of rights violations because of the importance they place on missionary activities and proselytizing. According to the Association of Protestant Churches, Turkey’s Protestant community numbers between 6,000 or 7,000 people, 80% of whom are Turks and of Muslim origins. People from Muslim backgrounds who are attracted to Christianity tend to gravitate toward Protestantism, because of the more closed nature of the Orthodox and Catholic communities. Hence, the Protestants’ proselytization activities are more visible.

The government's discrimination against the Protestants also extends to refusing to have an official dialogue with them. Soner Tufan, spokesman for the Association of Protestant Churches, told Al-Monitor that the Catholic, Orthodox, Syriac and Jewish communities all enjoy state recognition as legal entities and the privileges stemming from the Lausanne Treaty, modern Turkey’s founding document and other international agreements. “The Protestants, however, are not officially part of any protocol. This means the Protestant community is totally ignored,” said Tufan.

Ozbek told Al-Monitor that the snub by the state began after the Justice and Development Party (AKP) took power in November 2002. “During AKP rule, we have never been treated as interlocutors by government officials and presidents. During the terms of previous governments, however, we used to have meetings with officials.”

Summing up the effects of the rights violations and inability to be heard or recognized, Ozbek said, “We are anxious and distressed. We are being threatened. There are serious obstacles that keep us from expressing ourselves. We live in difficult conditions. We are unable to open places of worship and [properly] perform our religious rituals. ‘You cannot live here,’ is the message we are being sent. The problems we face both in daily life and in terms of representation leave us with a sense of entrapment. The country is already going through a difficult period amid armed conflict, political tensions and uncertainty. Under these conditions, things become even more difficult for us. We expect the government to be more moderate toward us and open channels for dialogue.”