President Recep Tayyip Erdogan is gearing up to resume the Kurdish settlement process — but with new dialogue partners with Islamist inclinations. 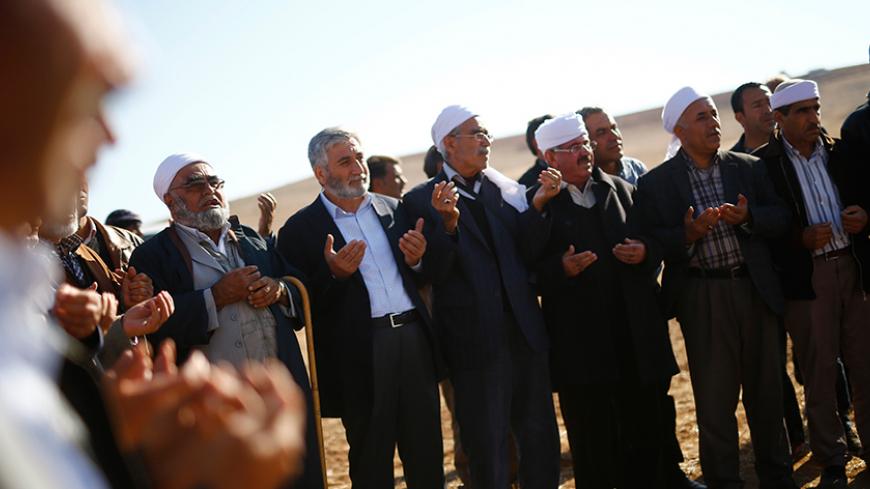 Turkish Kurds and clerics pray near the Mursitpinar border crossing on the Turkish-Syrian border in the southeastern town of Suruc, Oct. 25, 2014. - REUTERS/Kai Pfaffenbach

ANKARA, Turkey — Ahead of the June 7 elections last year, President Recep Tayyip Erdogan put the Kurdish settlement process on hold. Then, addressing a rally in Istanbul in September, he said, “Turkey has no Kurdish problem. Are the Kurds the only ones who have problems? The Lazes, the Circassians have problems too.” As recently as Jan. 6, Erdogan stood his ground. “Turkey has no Kurdish problem, but a terror problem. No one should try to palm it off on us as a Kurdish problem,” he said, referring to the rekindled conflict with the Kurdistan Workers Party (PKK). The president seemed to have utterly forgotten his landmark speech of 2005, when he told a big crowd in Diyarbakir, the hub of the Kurdish-majority southeast, that “the Kurdish problem is my problem” and promised to resolve it.

But then, on Jan. 20, he again spoke of a “solution.” This time, however, he seemed to have a different model on his mind, as he ruled out any dialogue with the PKK and the Peoples’ Democratic Party (HDP), the principal political body of Turkey’s Kurds, which Ankara accuses of collaborating with the PKK insurgency. “In the upcoming period, neither the separatist terrorist organization nor the party and other structures under its guidance will be recognized as interlocutors. That business is over. With all their organizations, parliament members and mayors, they will answer for their deeds before the courts,” Erdogan said. “And we, together with our people, will put the region back on its feet. Once our security forces purge the region of the terrorists and restore public order, we’ll sit down with our [Kurdish] people and citizens to decide how a thorough solution to the problem can be achieved and will then put it into practice.”

The dialogue model Erdogan scrapped dates from 2013, when he was prime minister. It was based on contacts between senior officials from his Justice and Development Party (AKP), the HDP and its predecessor, jailed PKK leader Abdullah Ocalan, and PKK commanders based in Iraq’s Qandil Mountains. So the PKK and the Kurdish community’s representatives in parliament, the HDP, are no longer considered interlocutors.

And who are the new Kurdish interlocutors in Erdogan’s mind? The answer came a week later from presidential spokesman Ibrahim Kalin, who explained that Kurdish opinion leaders, members of the "village guards" pro-government Kurdish militia, tribal leaders and religious notables would be invited to the presidential palace, along with certain politicians and civic groups, to hold consultations on a solution.

The profile of the would-be interlocutors suggests the new settlement process will proceed on grounds different from the previous ones, which were based on the idea of recognizing, expanding and constitutionally guaranteeing Kurdish political, social and language rights as part of a new, more democratic constitution.

To start with, the Kurdish village guards — most of them from prominent tribes — represent militia groups organized, armed and paid by the government since the 1990s to back the security forces against the PKK.

The tribal leaders, for their part, are the remnants of the region’s authoritarian tribal system, in which landless villagers work for and submit to the tribal chiefs as semi-slaves.

The religious figures — mullahs and the Kurdish Islamic scholars called “meles” — are clerics who enjoy great respect and spiritual clout among the Kurds, performing religious duties as imams or teaching the Quran. They received their religious education as children in unlicensed Quranic schools, which the state has tolerated after the banning of madrassas and dervish lodges in the early years of the secular republic. In 2011, the mullahs and the meles, who are particularly influential among Sunni Kurds, were granted the right to officially serve as imams under a government decree that created 1,000 slots for them on the payroll of the Religious Affairs Directorate.

As for the political figures Kalin mentioned, they remain unknown at present. With the HDP discarded, its sister movement, the Democratic Regions Party (DBP), stands no chance. The DBP’s agenda focuses on demands for self-rule in the southeast, and its membership includes the region’s Kurdish mayors, whom Ankara accuses of collaborating with armed militants in urban clashes raging since the summer. Many of those mayors have been arrested or removed from office. The Democratic Society Congress, an umbrella organization for Kurdish civic groups, enjoys no favor with Ankara, either. In December, it adopted a declaration calling for Kurdish autonomy, to which Erdogan responded with a stern warning: “We’ll bring the world down on those who seek to create a state within the state under the pretext of self-rule and autonomy.”

Who, then, are Erdogan’s would-be political interlocutors? The possibilities include:

In sum, it seems Erdogan’s new settlement model will rely largely on two alliances — a feudal one with Kurdish tribes and their armed forces, the village guards, and a religious one resting on the Sunni Islamic axis — spiced up with a few token political figures who have no real popular base or influence. Some potential HDP defectors might also join in.

Interestingly, Erdogan has not counted Ocalan among the discarded interlocutors, suggesting that Ankara’s engagement with the PKK founder, locked up on his prison island, would continue. Barred from meeting with HDP members for almost a year, Ocalan has shown signs he could agree on introducing a religious axis to the settlement process. A "Democratic Congress" — proposed by Ocalan and indirectly encouraged by the AKP — convened twice, in May 2014 and December 2015. Ocalan sent a peace message with religious references to the first gathering, while the final declarations of both meetings called for a new "Charter of Medina" — a reference to the document drafted by the Prophet Muhammad to end intertribal fighting between rival clans.

Furthermore, minutes from Ocalan’s meetings with Kurdish lawmakers, leaked in 2013, quote him as saying that the Kurds could support Erdogan’s bid for an executive presidency as part of an “alliance” with the AKP, in which Kurdish demands are met in return. HDP leader Selahattin Demirtas, however, based his June election campaign on promises to block Erdogan’s drive for an executive presidency, which explains why Ocalan seems to still retain a kind of favor with Erdogan while the HDP leader is being banished.

At present, however, the clashes between the security forces and PKK militants continue in a number of cities across the southeast. Last week, former Deputy Prime Minister Bulent Arinc, a veteran AKP heavyweight who seems to be increasingly falling out with Erdogan, urged an end to the security operations, stressing that the PKK “could not be finished with arms.” He also called for the resumption of the settlement process, in which, he said, Ocalan’s participation is a must.