Some have described the late Jaish al-Islam leader Zahran Alloush as a moderate leader, although his fiery anti-Shiite and anti-democracy statements indicate otherwise. 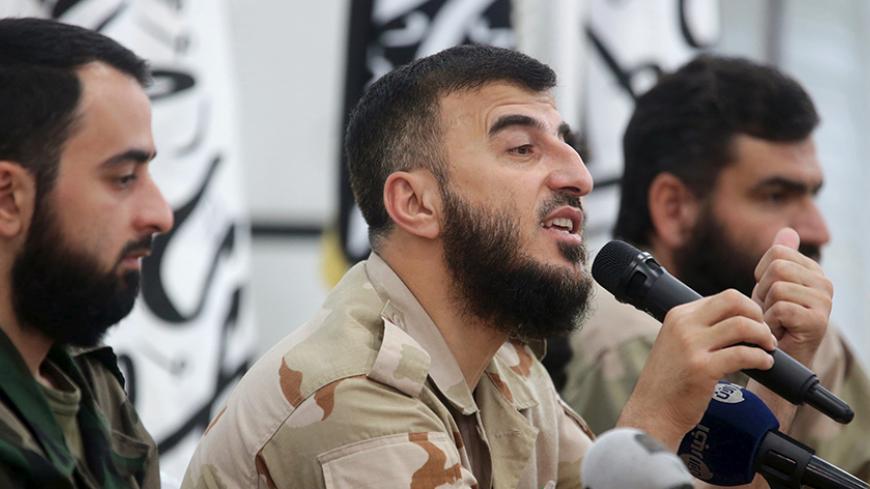 The military chief of the pro-opposition Syrian Islamic Front (SIF), Zahran Alloush, was killed Dec. 25 in an airstrike believed to have come from a Russian warplane in the village of Uthaya to the east of Damascus.

Until 2013, Alloush had been the leader of Jaish al-Islam (Army of Islam) before it merged with other armed opposition groups within the SIF, which is seen as the most powerful among the opposition groups in Syria.

Alloush was described by US politicians such as former US Ambassador to Syria Robert Ford, as well as in media outlets, as a moderate opposition leader backed by Saudi Arabia and Turkey. He visited Turkey on several occasions and attended public meetings there, including a ceremony at the Sham Khotaba Association in Istanbul in April 2015.

He is also believed to have been one of the key figures in the Turkey-Saudi alliance project to overthrow Syrian President Bashar al-Assad. Following the arrival of Alloush in Turkey in April 2015, Saudi journalist Jamal Khashoggi, who is close to the Saudi regime, said that with the arrival of Alloush, the Saudi-Turkish-Qatari alliance was ready to start.

In a video published in September 2013, from a place called the Palace of the 10th Umayyad Caliph Hisham ibn Abd al-Malik, located in the city of Resafa, southwest of Raqqa, Alloush announced the re-establishment of the Umayyad caliphate in the Levant and other Muslim countries. The Umayyad had ruled the Islamic world from 661 until 750, founding an empire that stretched all the way to China. They were known for their persecution of the first Shiites, which caused the latter to despise and distance themselves from the Ummayyad.

“We will bury the heads of impure Shiites in Najaf, God willing. The Umayyad glory will return to the Levant in spite of you,” Alloush said in the video recording. He continued his anti-Shiite speech basing his statements on a prophecy mentioned in the Sunni accounts about the Prophet Muhammad.

“Matters are not up to you, the prophet had foreseen that you will become ordered soldiers in the Levant, Yemen and Iraq. … [The prophet said:] 'The Levant is God’s finest land, and he has entrusted me [Prophet Muhammad] with it and its people.'” Alloush then added, “Shiites have claimed that no state shall emerge again along the lines of the Umayyad state. However, as the Umayyad had previously broken your heads, the Levantines will break them again, you impure rejectionists.”

Alloush’s rhetoric reproduced the Salafi vision in the system of governance — a vision of reinstating the caliphate and fighting against Shiites. There is no doubt that his Salafi educational background had much to do with his behavior and actions. Alloush grew up in a well-off Salafi family in Syria and pursued his religious studies at the Islamic University in Saudi Arabia that teaches Salafi Wahhabi approaches as part of its curriculum.

In an interview with Al Jazeera in November 2013, Alloush was clear about his opposition to democratic systems in general and republics in particular, calling for the establishment of an Islamic state after the departure of Assad. He also called for the establishment of an Islamic caliphate, stressing the need to adopt Sharia, including religious penal laws.

Alloush had also managed religious courts in the areas under his control in Syria.

Thus, it was surprising that he was described as a moderate leader. Perhaps these statements were made based on the fact that he did not oppose cooperating with Western regimes to overthrow Assad and because he was not hostile to the Saudi and Arab regimes, unlike the Islamic State (IS) and al-Qaeda.

IS rejects any cooperation with Sunni regimes and the West, even if there is a common enemy such as Assad in the case of Syria, or the Shiite government in the case of Iraq.

However, Alloush appeared to have rallied behind Jabhat al-Nusra — which is the official front of al-Qaeda in Syria — and met many times with its well-known leaders.

Alloush’s ideology can only be understood in the Salafi and jihadi contexts, as he ultimately espoused this religious dogma that is known for its extremism, given the violence it employs in political life.

Salafi movements have a common prophecy about the future according to the following chronology: In the beginning, there were the prophet’s successors, followed by kings and princes, only for the caliphate to be reinstated. Most Salafi groups believe in this prophecy and are waiting for the return of the Islamic caliphate. However, there are some differences in how these groups view the realization of the caliphate. While the likes of Alloush believe that the caliphate will re-emerge gradually and pragmatically in the end times and will be along the lines of the Umayyad caliphate, others, such IS, have a more utopian and radical vision.

IS believes that a revelation will take place in the end times, which will lead to the establishment of an Islamic state that is radically different from the caliphates of Islam’s entire history — except for the era of the prophet and his companions. On the other hand, Alloush and other Islamic groups believe the future caliphate will be in line with the Sunni models of governance that were established throughout the history of Islam, up until more recent models, such as the one in Saudi Arabia, which Alloush did not oppose cooperating with.

Thus, what is described as moderate in Alloush’s approach boils down to his approval of dealing with Western and regional countries and accepting their aid so as to achieve the prophecy. Meanwhile, the more radical groups, such as IS, squarely reject any dealings with these countries. Yet the difference between the two sides remains in the preliminary tactic and not in the basic principles and ultimate goals.

There are different orders in Salafi jihadism, all working toward the same ultimate goal of establishing the Islamic caliphate. It is true that the means to achieve this dream differ, but they share the same ideological denominator, which is obvious in their arbitrary handling of citizens’ civil and intellectual rights.

Therefore, labeling some less politically extremist groups as moderate and supporting them regardless of their ideology will eventually lead to anti-democratic practices, the abolition of human rights-related issues and freedoms and the promotion of radical trends.