Washington’s demand that Turkey withdraw troops from Iraq and the US alliance with Syrian Kurds are potential flashpoints in US-Turkish relations. 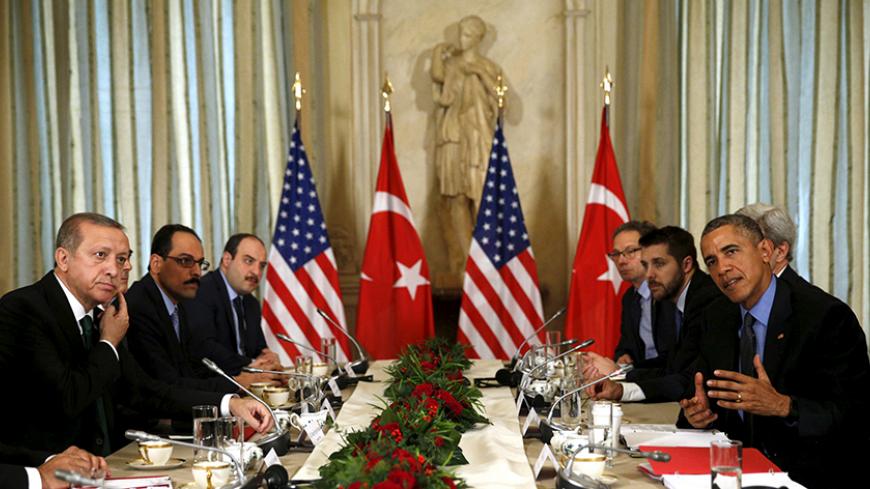 Turkey and the United States may be strategic partners, but this has not prevented a rise in tensions between them stemming from differences over developments in Iraq and Syria. Turkish-US relations face potentially fresh turbulence as US-led coalition forces make headway against the Islamic State (IS), amplifying their differences. Both countries are nevertheless trying to keep a lid on their strained relations.

Turkey continues to play host to high-level representatives from the United States, in the process trying to take advantage of their visits to draw Washington closer to its line on Iraq and Syria. A Jan. 6 visit by Gen. Joseph F. Dunford Jr., chairman of the Joint Chiefs of Staff, was followed by a delegation of US senators led by Kirsten Gillibrand, a Democrat who is a member of the Senate Armed Services Committee.

Vice President Joe Biden is due in Turkey on Jan. 23 for talks with Turkish President Recep Tayyip Erdogan and Prime Minister Ahmet Davutoglu that are expected to concentrate on Iraq and Syria. There is little indication, however, that the Americans' visits are helping iron out existing differences on Iraq and Syria.

Washington has been using these contacts to appease Turkey by praising its contribution to the fight against IS and its efforts to provide shelter to Syrian refugees, as well as noting its gratitude for Ankara allowing the US-led coalition to use the strategically situated Incirlik Air Base, near the southern city of Adana, to launch air attacks against IS.

In December en route to Incirlik, however, Secretary of Defense Ashton Carter told reporters that Turkey had to contribute more to the fight against IS. “Turkey has an enormous role to play … in the air and [on] the ground as appropriate,” Carter said. He added, “The single most important contribution that their geography makes necessary is the control of their own border,” emphasizing the Western grievance that Ankara is not doing enough to secure its border with Syria to prevent the uncontrolled flow of refugees and crossings by IS militants.

Of course, Turkey has its own set of grievances regarding US policies in Iraq and Syria. For one, it is angry over Washington backing Baghdad’s call for all unauthorized Turkish troops in Iraq to be withdrawn. In December, Iraq complained to the UN Security Council about the deployment of additional Turkish troops and tanks at the Bashiqa camp, near Mosul, saying Turkey had not informed the government in Baghdad about the move. A limited number of Turkish soldiers had already been at the camp for months training fighters to combat IS.

The Shiite-led government of Prime Minister Haider al-Abadi, which Ankara claims is acting under pressure from Iran, is reportedly concerned the Turkish move is part of an agenda to gain a foothold in predominantly Sunni Mosul after this strategic city is liberated from IS. Under US pressure, Turkey agreed to withdraw the additional troops, but sources in the region say this has not happened. Rather, Turkey simply moved some of its forces in Bashiqa to areas controlled by its Iraqi Kurdish allies.

A White House readout of a phone conversation between President Barack Obama and Abadi on Jan. 6 revealed Washington’s unequivocal position on the matter: “President Obama reaffirmed the United States’ commitment to Iraq’s territorial integrity and sovereignty and called on Turkey to do the same by withdrawing any military forces that have not been authorized by the Iraqi government.” Obama had issued a similar call in December.

Ankara is also angry with Washington for its support of the Democratic Union Party (PYD), the umbrella organization of Syrian Kurds, and its military wing, the People's Protection Units (YPG). Turkey has designated the PYD and YPG as terrorist groups because of their links to the Kurdistan Workers Party, which Turkey has outlawed. Washington considers the PYD and YPG legitimate organizations.

The US-supported Syrian Democratic Forces (SDF), consisting overwhelmingly of YPG fighters, has garnered US praise for defeating IS in a number of strategic locations in Syria, backed by US air support. The SDF recently took the strategic Tishrin Dam from IS and crossed to the west of the Euphrates River, defying a red line Ankara had set regarding the Kurdish presence in that part of Syria. Turkey fears that the Syrian Kurds will carve out an autonomous corridor along the Turkish-Syrian border and that such an occurrence would encourage Kurdish separatism in Turkey.

Ankara communicated its concerns about the YPG to Dunford during his visit, but given that the Kurds have already moved west of the Euphrates, it is unclear what Ankara can now do about enforcing its red line. Kilic Bugra Kanat, from the Ankara-based Foundation for Political Economic and Social Research, believes the YPG will remain the most significant challenge for Turkish-US relations in 2016.

“In several different instances, the government said that it has important red lines regarding the actions of the YPG and serious concerns regarding operational cooperation between YPG and PKK forces. US military assistance to this group may result in serious problems of trust in bilateral relations,” wrote Kanat in his column for the pro-government Daily Sabah. Washington, however, appears unlikely to abandon the Kurds. Dunford praised YPG fighters during his visit, even though his Turkish counterpart, Gen. Hulusi Akar, had cautioned him about the group.

“There have been some good things happening,” Dunford was quoted as saying in a Department of Defense release. “The Tishrin Dam [in northern Syria] has been secured, [and] a pretty significant swatch of ground has been uncovered by the Sunni Arab coalition working with the [People's Defense Units].” Washington refers to the SDF as a “Sunni Arab coalition” to avoid angering Turkey further.

An underlying problem in Turkish-US relations is that the two sides are unhappy about the other’s regional allies in Syria. While Turkey opposes the PYD and YPG, some anti-Assad groups supported by Turkey, such as al-Qaeda-linked Jabhat al-Nusra, have been designated terrorist groups by the United States. Ankara significantly weakened its hand against the Syrian Kurds by downing a Russian fighter plane Nov. 24 as it carried out operations against anti-Assad Turkmen forces in northern Syria. The incident resulted in increased Russian support for the YPG in northern Syria and west of the Euphrates.

Given Turkey's lack of leverage against the Syrian Kurds, it remains to be seen to what extent Washington takes Ankara’s positions into account in the prelude to the UN-led Syrian peace talks slated for Jan. 25 and in their aftermath. Faruk Logoglu, former Turkish ambassador to Washington (2001-2006), underscored Ankara’s weak position in this regard. “Turkey has no power to influence Washington, because we do not have a government that is able to define the country’s national interests properly,” Logoglu, currently a deputy with the main opposition Republican People's Party, told Al-Monitor.

Logoglu believes that potential tensions between the two countries will nevertheless be contained because of the necessity of cooperating against IS. He said the imperative increased for Turkey after the Jan. 12 suicide attack by the group in Istanbul’s touristy Sultanahmet Square that left 10 dead and 15 injured. Logoglu added, however, that developments in Bashiqa will remain the most immediate potential flashpoint in Turkish-US relations.