What’s next for the Syrian regime?

The Syrian regime forces, with the help of the Russian air force, have managed to take over the strategic town of Salma, thus getting closer to the Syrian-Turkish border. 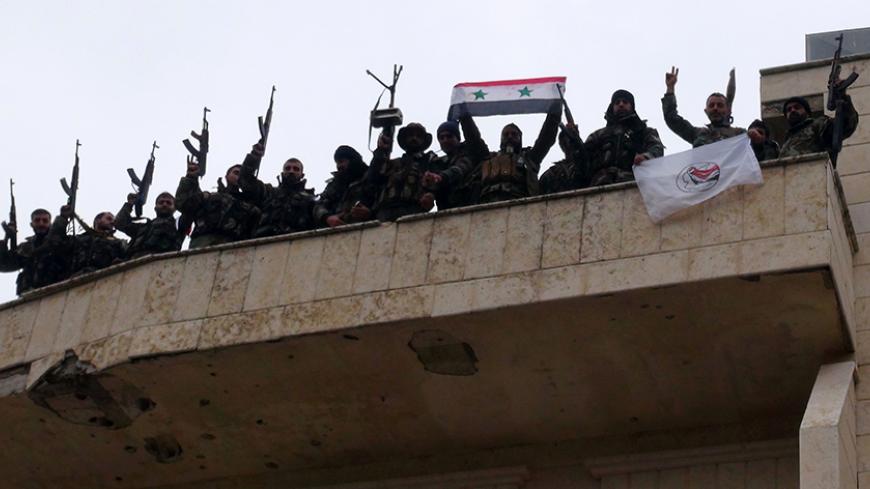 LATAKIA, Syria — Leaving Damascus is no longer an easy journey these days; the Syrian regime has erected dozens of military checkpoints between the northern entrance of the capital and the international highway to inspect the documents and luggage of travelers. Through these inspections, the regime is trying to catch those evading compulsory military service and those opposing the regime. This is making the trip tougher, longer and more perilous.

After waiting for two hours at regime checkpoints to leave the capital, Al-Monitor took the Damascus-Aleppo international highway to go to Latakia province, 385 kilometers (239 miles) northwest of Damascus. We then safely drove via the Harasta Highway in the northern countryside of Damascus, with the knowledge that it is often targeted by opposition snipers. At the regime's checkpoints, our official documents were thoroughly inspected. Six hours later, we reached Latakia province, whose countryside has recently witnessed significant progress on the part of the Syrian regime forces.

The regime-controlled city of Latakia seemed quiet. There were no sounds of nearby clashes or opposition shells falling onto its neighborhoods, considering that the regime — with the help of Russian air cover — took control on Jan. 12 of the town of Salma, 48 kilometers (30 miles) northeast of Latakia, and deemed as the main location from which missiles were fired by opposition fighters into Latakia.

This was confirmed by journalist Hani Haidar, whom Al-Monitor met at his office in Latakia. Haidar covered the regime operations that were aimed at controlling Salma.

“The Syrian army's progress toward Salma started after the regime took control over the Jirn al-Qalaa hills, Rweiset al-Qalaa, Shish al-Qadi, Dahr al-Adra, Rweiset al-Toyour, Qaraqfi Mount in the vicinity of the city and Tartyah village, where the regime started progressing to control the suburb of Salma in a key move that allowed it to progress toward the heart of the town,” Haidar told Al-Monitor.

He added, “The Russian air raid and the Syrian army’s control over the hills surrounding the town contributed to blocking the supply roads for [opposition] gunmen, who withdrew toward Marouniyat village [1 kilometer north of Salma] while using the region’s dense trees for cover. However, the Syrian army attacked and controlled Marouniyat village on Jan. 13, which forced the opposition militants to retreat again to the north toward the town of Rabia, which is adjacent to the Turkish-Syrian border.”

For his part, Ali Safyan, an opposition commander who was in Salma during the battle, told Al-Monitor via Skype, “The military campaign against the town of Salma effectively started in October 2015.”

In regard to the reasons behind the withdrawal of opposition fighters from the town, Safyan said, “The regime forces’ attack mainly relied on the Russian air raids.”

He said, “In addition, major opposition factions such Jaish al-Fatah refrained from supporting opposition forces on the coastal front while foreign [Iraqi and Lebanese] militias participated in the battles to support the regime. These two factors were among the reasons behind our loss of the town.”

Safyan said that despite the opposition factions’ loss of Salma, the regime forces suffered heavy losses, with “800 dead and 10,000 [military] vehicles destroyed during the three-month battle.”

He pointed out that battles between the two parties in Marouniyat have been ongoing since Jan. 13, and that the regime forces were able to progress toward the town following their regaining control of Salma.

Salma is about 800 meters (half a mile) above sea level. It is strategically located in the center of a triangle connecting the countryside of Latakia, the countryside of Idlib and the countryside of Hama. It is a mountainous town close to the Turkish border and Mount Turkmen, which is under the opposition’s control. Mount Turkmen witnessed heavy Russian shelling amid the regime’s attempts to advance, following Turkey’s downing of a Russian jet on Nov. 24.

In regard to the opposition battalions’ ability to keep control over Salma for three years, starting in July 2012, retired Syrian army Brig. Gen. Hafez Nabil told Al-Monitor over the phone from Damascus, “The nature of the mountainous town helped opposition forces tighten their control over it during the previous period.”

"[Salma] provided a cover for the supply routes from Turkey [to the opposition]. In addition the town is close to one of the largest regime fortifications in the region, namely in Slinfah city.”

Nabil added, “The opposition forces used Salma as a springboard to launch attacks on neighboring villages with the same Alawite majority and kidnap the citizens of these villages. This is one of the reasons behind their desperate attempts to defend the town; the opposition considers that the regime will be doomed in the coastal area as soon as Alawites are killed. The opposition also deemed the town to be an obstacle to the regime’s dream of creating an Alawite mini-state in the coastal area.”

Nabil explained that the regime forces’ progress in the countryside of Latakia is a threat to the opposition-controlled western countryside of Idlib, as it blocks its supply routes between Jisr al-Shughur and the Kurd Mountains. This progress threatens the existence of the opposition in Mount Turkmen, a major target for the Russian airstrikes following the Russian fighter jet incident.

A field commander in the pro-regime Baath Brigades engaged in the Latakia countryside battles told Al-Monitor in Latakia, on condition of anonymity, “By taking control over Salma, we destroyed the largest set of the militants’ field hospitals. The next phase of the military operations — which is what we call the post-Salma stage — is to expand in the north and northeastern parts of the town toward the town of Kinsabba. This will allow us to reach Jisr al-Shughur in the countryside of Idlib and then advance toward the north in order to launch deadly strikes against militants.”

He stressed, “The success of the regime forces in controlling Salma and progressing beyond would not have been possible, had it not been for the Russian air cover,” which accompanies any progress on the ground on the part of the Syrian regime and its supporters.

Will the regime and the Russians manage to enter the opposition strongholds in the north? The coming days will provide an answer to this question. Meanwhile, the regime forces keep advancing toward the north, where they has taken control of Mureij and Ras al-Ghazal and Ras al-Kabir. The Washington Post published documents Jan. 15 that it obtained from a Russian government website it did not name showing that Russian support for the regime is indefinite.