Turks stay away from politics except when it is time to go to the polls. 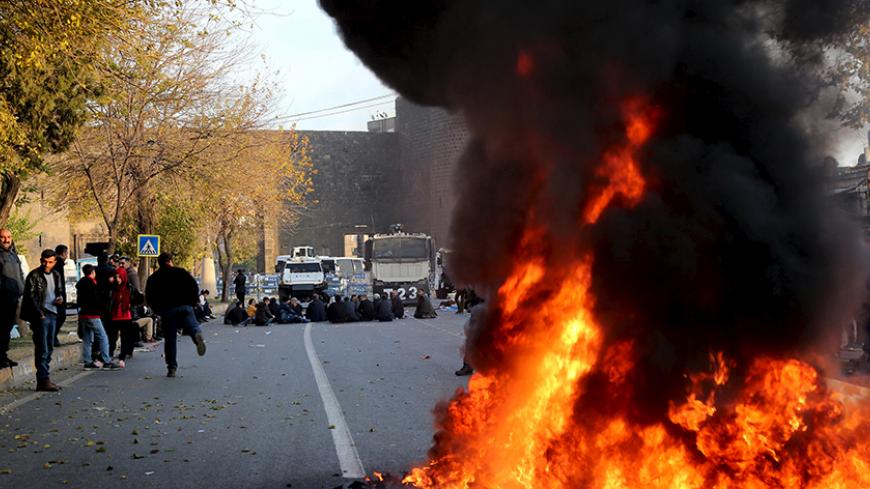 Demonstrators sit between a fire and police barricades during a protest against the curfew in Sur district in the Kurdish dominated southeastern city of Diyarbakir, Turkey, Dec. 10, 2015. - REUTERS/Sertac Kayar

Last week, professor Ali Carkoglu from Koc University and professor Ersin Kalayciglu from Sabanci University released the results of their study titled “Citizenship in Turkey and in the World: 2014 ISSP Research Report." The study was conducted with support of the Scientific and Technological Research Council of Turkey, as part of the International Social Survey Program (ISSP) implemented in 43 countries.

The results are based on answers from face-to-face interviews with 1,509 respondents in 58 Turkish provinces, conducted between Feb. 13 and April 6.

As the concept of citizenship is at the core of democracy, this study — which sought to find answers on questions related to the respondents’ own understanding of citizenship — contributes important information on the state of democracy in Turkey. The survey's questions were based on topics related to the relationship between the state and the individual on subjects such as paying taxes, obeying the law, voting in elections, participating in civic organizations, tolerating differences and interpersonal trust.

One of the most striking results of this study is the remarkably high percentage of respondents (76%) who saw voting as a very important part of being a good citizen. Among all ISSP participant countries, Turkey rates the highest in this regard. Similarly, alongside the United States (73%) and Japan (72%), Turkey shows the highest rates of respondents (73%) who claim that full payment of taxes is another essential element of good citizenship.

Moreover, respondents cited respecting the law, showing tolerance of differences, and aiding others who are less well-off as other important elements of being a good citizen, according to their own understanding of the idea. Overall, it turns out that the survey participants from Turkey understand “good citizenship” in a pretty idealistic way. This could be a sign of what is known as "social desirability bias" in social science, because contradictory responses to other questions showed intolerance instead. For example, a large number of respondents said it was not acceptable to allow public meetings of groups perceived as different or threatening.

In addition, while citizens in democracies have rights, they also have responsibilities that require their participation in politics and civic life. In these terms, as this study shows, the situation in Turkey differs significantly from established democracies that are participants of the ISSP, such as the United States, the United Kingdom, Switzerland and countries in Scandinavia.

Furthermore, 89% of respondents said they were not a member of any trade union, whereas for the purpose of comparison, the same number in developed democracies such as Finland, Denmark and Sweden is below 40%. Surprisingly, 93% of respondents said that they were not part of any religious organization, which is 51% in ISSP countries. Similarly, 88% of Turkish respondents are also not a member of any sports or hobby club or cultural association, and 91% were never a member of a voluntary organization. All these results show passive citizenship, or rather almost nonexistent civilian participation in civic society. No wonder everyone shuns organized activities regardless of their nature; the very word “orgut,” which stands for organization, carries a historically sinister meaning in Turkish, generally implying illegal, criminal activity.

Besides such staggeringly low figures of political participation, there is also very little interaction among individuals. Considering that in a typical workday, the majority of respondents said they have contact with zero to four people, and the next biggest group of respondents said they only have contact with five to nine people, the difficulty of forming common ties, social networks or alliances with other citizens becomes even more obvious.

Consequently, the majority of people that Turks interact with on a daily basis are only their relatives, friends or acquaintances. Unsurprisingly, for years, various studies place Turkey among the countries with the lowest interpersonal trust in the world. In this study also, only 1.5% of respondents — so almost no one — said that in general people could always be trusted, and only 13% stated that people could be trusted in general. Three out of four, or 75%, of respondents stated that if someone was unfamiliar to them this did not work in their favor, and only 7% believed that people were always trying to be honest.

Hence, if citizens in Turkey have no trust in one another, and rarely mix with strangers, if at all, it becomes more understandable how, for a large majority of people in Turkey, voting remains the main or only political activity.

When it comes to politicians and their activities, 51% of survey respondents believe that politicians favor their personal interests over the public benefit. On a similar note, 18% of respondents stated that almost every public servant is involved in some sort of corruption, and 33% stated that many people were involved in corruption. About 22% stated that a small group of people was corrupt, while 3% said that no one is corrupt in the field of public service. Citizens of other countries gave similar responses to this question, but considering the huge government corruption scandals that were made public in December 2013, it is striking that almost half of Turkish citizens either were not affected by this or did not believe in the corruption allegations. One of the possible reasons for such an outcome could be the power of the media. Citizens should be informed about public issues and be able to express their opinions, but the majority of people in Turkey (78% of those surveyed) gets their news from television. In this regard, Carkoglu said, “The media’s highly partisan coverage does not bode well for the ultimate fate of the country’s democracy.”

Ultimately, when it comes to the question of overall effectiveness of democracy in Turkey, around 40% of respondents believe democracy works well, while another 40% think the exact opposite, reflecting Turkey's political polarization. This finding is in contrast to ISSP participant countries that are established democracies. While Sabanci University says that there has been "significant improvement (9%) in this perception compared to a decade ago," much still needs to be done to keep the numbers about the positive perception about democracy going up.

In general, this survey confirmed voting as a major political activity in Turkey, where otherwise everyone seems to only mind their own business, seek individual benefits and interact with familiar or similar individuals. In such a distrustful society, democracy can’t stay healthy. More paranoia and polarization and excessive politicization of society will not help. As long as there is a crushing fear of state as an authority that punishes rather than serves, more nurtured civic values and encouraged political participation in Turkey will remain mere wishful thinking.