Will Israel's military intervene in the West Bank?

Palestinians question the reasoning behind calls for an Israeli "Operation Defensive Shield 2," given the lack of available targets and unclear objectives. 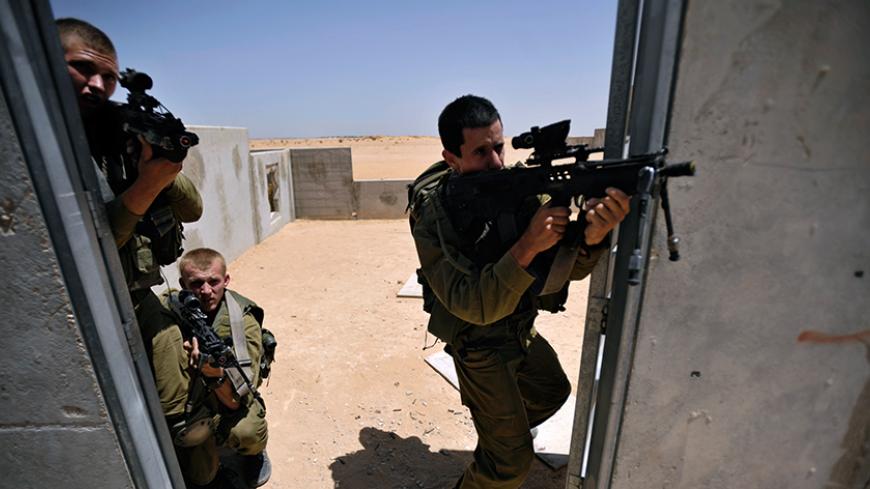 Israeli soldiers take part in an urban warfare drill inside a mock village at Tzeelim army base in the Negev Desert, June 30, 2009. - REUTERS/Amir Cohen

Though the idea lacks broad support, some Israeli politicians and military leaders have publicly discussed the possibility of launching an "Operation Defensive Shield 2" to deal with ongoing Palestinian attacks. Despite the Israeli military's attempts to limit or prevent them, the attacks on settlers have continued since Oct. 1.

On Nov. 22, Davide Perl, head of the council of the Gush Etzion settlement, issued a statement to the press calling for such a response, and a day later, so did Education Minister and HaBayit HaYehudi leader Naftali Bennett. Israeli military commentator Amos Harel on Nov. 27 predicted, “The Israeli army’s invasion of Hebron in the West Bank is only a matter of time and will happen sooner or later under pressure from the leaders of the Israeli right-wing.”

Hamas official spokesman Husam Badran told Al-Monitor, “Israeli politicians are talking about Operation Defensive Shield 2 to outbid the Israeli government and accuse it of failing to deal with the intifada. Should Israel implement this operation, new parties will enter into confrontations against it, such as members of Fatah and the Palestinian security services. This would exacerbate the intifada, not weaken it.”

Israel conducted Operation Defensive Shield from March 29-April 21, 2002, in an effort to quell the second intifada, which began in September 2000. The Israeli military operation, which involved invading all West Bank cities, resulted in dozens of Israeli soldiers killed and hundreds of Palestinian deaths. All told, the second intifada resulted in more than 1,000 Israeli deaths from its outbreak until early 2005.

Palestinian attacks significantly decreased after the invasion, and large quantities of weapons belonging to the Palestinian Authority (PA) were confiscated. The Israeli army arrested hundreds of Palestinians and heavily damaged large parts of the West Bank, including PA headquarters in Ramallah, where President Yasser Arafat had remained under siege.

Alaa al-Rimawi, director of Al-Quds Center for Israeli Studies in Ramallah, told Al-Monitor that in the past couple of months, 22 Israelis have been killed and 300 others injured in Palestinian attacks, which included 56 shootings, 62 stabbings and people being run over with cars, and 31 stabbing attempts. Palestinians also threw stones at settlers’ cars and soldiers in 22 confrontation points with the Israeli army in the West Bank and Jerusalem, in addition to throwing almost 600 Molotov cocktails.

Israel has not experienced the current rate of fatalities since the first intifada, which began in 1987 and lasted until 1993, during which 160 Israelis were killed.

The Israelis calling for a military operation believe it is necessary because of the uprising's populist base and calls in mosques and through local radio stations to carry out attacks. They hope that an Operation Defensive Shield 2 would put an end to the stabbings and other attacks, like the original Operation Defensive Shield ended suicide bombings, although the current circumstances are different.

At the political level, the PA and Palestinian President Mahmoud Abbas are not declaring support for the attacks on Israelis, as was the case during the second intifada with Arafat. Also, security coordination between the Palestinian security forces and Israel is ongoing and designed in part to relieve Israel of involving its army in the Palestinian-controlled territories.

Mustafa Barghouti, secretary-general of the Palestinian National Initiative, claimed Nov. 24 that Israel had already unofficially launched an Operation Defensive Shield 2 by giving the army the green light to enter Palestinian villages and towns to conduct a massive arrest campaign. According to statements issued Dec. 1 by the Palestinian Prisoners Society, some 2,500 Palestinians were arrested during October and November.

Abdel Sattar Qassem, a political science professor at An-Najah National University in Nablus, told Al-Monitor, “A wide-scale invasion would further complicate the situation and would not calm the intifada, as the Palestinian attacks are individual attacks. The invasion of the West Bank would not allow Israel to either define the goals [of the attacks] or provide prior information about the perpetrators.”

If Israel launched a military operation, there would be no armed or otherwise-organized cells to target. It also remains unclear what the actual military goal would be, and perhaps this is why the Israeli army itself is opposed to a big operation.