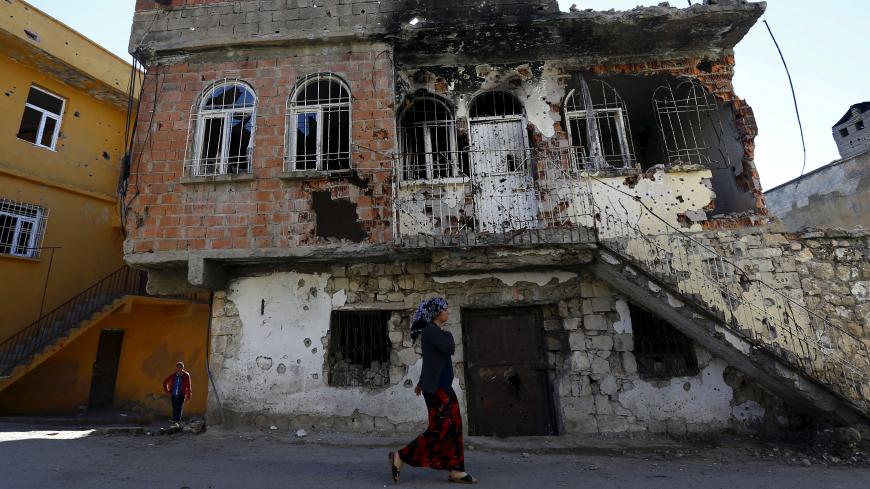 A woman walks past a building that was damaged during the security operations and clashes between Turkish security forces and Kurdish militants, in the southeastern town of Silvan in Diyarbakir province, Turkey, Dec. 7, 2015. - REUTERS/Murad Sezer

Turkish President Recep Tayyip Erdogan warned Kurdish militants Dec. 15 that “you will be annihilated,” and pledged that Turkish security forces will continue their massive military assault on Kurdish towns in southeastern Turkey until they are “completely cleansed and a peaceful atmosphere established."

Metin Gurcan reports that the escalation in military operations in towns where Kurdish militants associated with the Kurdistan Workers Party (PKK) have taken hold has increased the possibility of a civil war.

“At the moment, the Turkish army is moving tanks and armored vehicles to lay siege to those towns,” Gurcan writes. “Checkpoints have already been established at the towns' entrances. In many towns, particularly in Cizre, Silopi and Nusaybin, education has been halted with an extremely unusual move by the Ministry of Education, which sent text messages to about 3,000 public teachers instructing them to return to their hometowns for "on-the-job training." Since nobody believes such training would be done in the middle of the school year by closing schools, it is seen as a sign of approaching battles, further panicking the population. Now, teachers and other civil servants are rapidly evacuating these towns. Those who couldn’t find buses to get out were seen walking and hitchhiking.”

Amberin Zaman reports on the trend of increased radicalization of the PKK, including the rise of an armed youth movement loyal to imprisoned PKK leader Abdullah Ocalan.

“In a clutch of towns and cities across Turkey’s mainly Kurdish southeast, armed youngsters loyal to Abdullah Ocalan, the imprisoned PKK leader, and calling themselves the Patriotic Revolutionary Youth Movement (YDG-H), have seized control of entire streets and neighborhoods, erecting barriers and declaring autonomy,” Zaman reports. “The spirit of rebellion has permeated Sur, where pro-PKK slogans and posters of the mustachioed Ocalan cover bullet-riddled walls. Several young fighters interviewed by Al-Monitor all said that they would end their revolt only if ordered to do so by Ocalan. But since April 6, the Turkish authorities have not allowed any of his regular visitors, including the Peoples’ Democratic Party (HDP) lawmakers who used to carry messages from him, to meet with Ocalan in his island prison. The resulting vacuum has been filled by Cemil Bayik, the hard-line PKK commander who says he supports the YDG-H’s moves.”

Turkish Prime Minister Ahmet Davutoglu warned the HDP on Dec. 17 about “playing with fire” by exploiting the clashes. Figen Yuksekdag of the HDP said that 200,000 people have been displaced as a result of the fighting.

Mahmut Bozarslan, reporting from Diyarbakir, writes that the region “has been in chaos for weeks. Urban unrest across the mainly Kurdish southeast has simmered since August, when PKK-linked groups moved to take control of certain residential areas and declared what they call “self-rule.” The authorities responded with security crackdowns. To stop the security forces from entering the neighborhoods, the Patriotic Revolutionary Youth Movement (YDG-H), the PKK’s urban youth branch, dug trenches and erected barricades. The curfews followed, and young people armed with light weapons clashed with the police.”

Bozarslan continues, “The brief lifting of the curfew revealed scenes out of a war zone. Though the number of fleeing people was smaller, many compared the exodus with last year’s Kurdish flight from the Syrian city of Kobani to Turkey, sparked by the Islamic State’s offensive. Some residents claimed police had urged them to evacuate their homes as soon as possible. This reporter had to pass three police checkpoints to reach the inner part of the district, where bullet-riddled buildings, craters opened by explosions and toppled electric poles stood as grim testaments to the clashes. The oft-photographed house that has become the symbol of the unrest was immediately recognizable. Its walls were partially demolished and not a single square meter of its facade seemed to have escaped the bullets. In the adjacent house, an elderly woman was packing up. Pointing to the big hole in the building’s wall, she wept, 'Why has this befallen us? What did we do?'”

Kadri Gursel concludes that Turkey’s crackdown on the PKK has opened Ankara up to pressure from Russia. Turkey’s "cold war" with Russia allows Moscow to “increase military and political pressure on Ankara to deter it from backing jihadis,” Gursel explains. “It remains to be seen how long Ankara will be able to sustain the cold war with Russia and the heated conflict with the PKK without letting its two adversaries link up.”

The UN Security Council passed two resolutions last week that link a cease-fire and political transition in Syria to increased international efforts to defeat al-Qaeda-linked Jabhat al-Nusra and the Islamic State (IS).

Resolution 2253, passed unanimously on Dec. 17, builds upon all previous UN Security Council resolutions to direct member states to increase cooperation to prevent any form of support, trade or financing for Jabhat al-Nusra, IS and associated terrorist groups and entities. Resolution 2254, which passed unanimously the next day, gives the International Syria Support Group (ISSG) a Security Council mandate to implement a cease-fire and political transition talks as outlined in the recent Vienna meetings. The process envisions a six-month timeline to establish a transitional government, according to the 2012 Geneva Communique, with talks to commence in January, followed by 18 months to hold elections and enact a new constitution.

With regard to the increased focus on counterterrorism, Resolution 2254 calls on “Member States to prevent and suppress terrorist acts committed specifically by Islamic State in Iraq and the Levant (ISIL, also known as Da’esh), Al-Nusra Front (ANF), and all other individuals, groups, undertakings, and entities associated with Al Qaeda or ISIL, and other terrorist groups, as designated by the Security Council, and as may further be agreed by the ISSG and determined by the Security Council, pursuant to the Statement of the ISSG of 14 November 2015, and to eradicate the safe haven they have established over significant parts of Syria, and notes that the aforementioned ceasefire will not apply to offensive or defensive actions against these individuals, groups, undertakings and entities, as set forth in the 14 November 2015 ISSG Statement.”

The emphasis on counterterrorism in both resolutions could mean that Turkey will face even more pressure to crack down on the cross-border traffic by terrorist groups operating in Syria.

The UN resolutions should also help clarify the announcement last week by Saudi Arabia Deputy Crown Prince Mohammed bin Salman of a new Saudi-led 34-member “Islamic” alliance to battle terrorism. Saudi Arabia’s assertive leadership in the battle against terrorism is a welcome and noteworthy development. But the announcement of the coalition has been received with uncertainty about the kingdom’s intent and objectives. We will not here recount the many press reports of how some of the members of the coalition seemed to know little about it; that all of its members are Sunni states; and that Iran and Iraq are notable omissions. Nor is it worth reminding readers that Saudi Arabia has been contributing close to nothing to the US-led air campaign against IS, as Bruce Riedel wrote last month for Al-Monitor.

With the passage of resolutions 2253 and 2254, there is no ambiguity about the expected collective steps needed to defeat IS and Jabhat al-Nusra. As a member in good standing of both the United Nations and ISSG, Saudi Arabia could quickly reveal the sincere intent of its coalition by having the first items on its agenda being implementation of these resolutions. There may be more that Saudi Arabia can do over time, but enforcement of well-detailed and documented Security Council resolutions would be a good place to start, and a welcome contribution to the fight against terrorism.

Iranian Foreign Minister Mohammad Javad Zarif, in an interview with Al-Monitor, said that Iran has “set a red line that Daesh [IS], Jabhat al-Nusra and other al-Qaeda affiliates would not be recognized as legitimate oppositions. So whoever is not among them and whoever is prepared to sit down and seek a political solution, if they meet the criteria, then that's the criteria. Unfortunately, people are trying to avoid that criteria from being set.”

Zarif lamented the political gamesmanship around designation of terrorist groups in Syria, including reports that members of ISSG had requested that the Islamic Revolutionary Guard Corps and Hezbollah be included on the list of terrorist groups being compiled by Jordan.

Has Netanyahu closed the Iran file?

Mazal Mualem speculates that Israeli Prime Minister Benjamin Netanyahu’s uncharacteristically low-key response to the report by the International Atomic Energy Agency (IAEA) ending the investigation into the previous military dimensions of Iran’s nuclear program may reflect a shifting of priorities. “It is quite possible that Netanyahu is waiting for another opportunity to bring up the IAEA, but it is more likely that he has simply gotten everything he can out of the Iranian issue,” Mualem writes. “He recognizes that Iran is no longer on the international community’s agenda, that the nuclear deal is already part of US President Barack Obama’s legacy and that a unilateral attack by Israel is no longer a viable option. In addition, Netanyahu has in the meantime succeeded in creating new, alternative threats to Israel’s security, the foremost being the Islamic State. He assumes the tangible threat of terrorism nearby will cause Israelis to forget about Iran, and of course, he is right. The Iran file has been closed. No one in Israel seems interested in it anymore.”