What will control over Aleppo’s military base mean for Assad?

An expert on the situation in Syria talks to Al-Monitor about the repercussions of the Syrian army’s recent operation, where it succeeded in lifting the siege of the Kuweires military air base east of Aleppo. 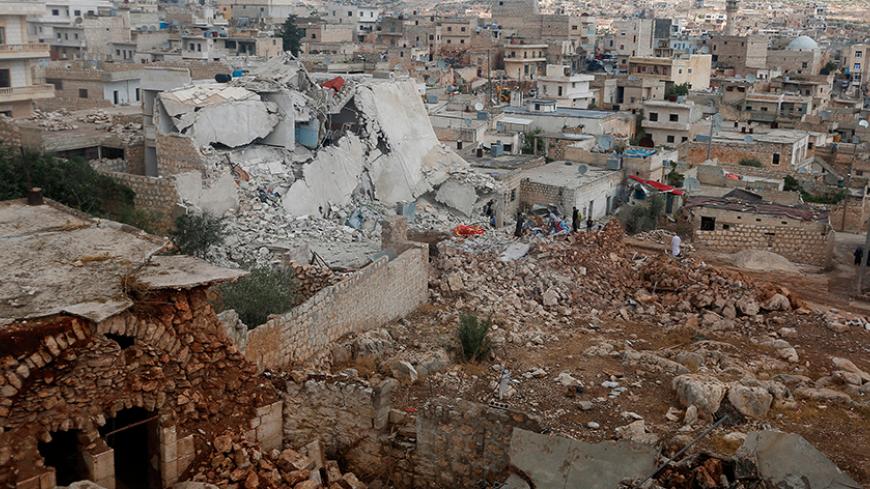 People inspect a site hit by what residents said were airstrikes carried out by the Russian air force in the province of Aleppo, Oct. 7, 2015. - REUTERS/Ammar Abdullah

On Nov. 10, the Syrian army succeeded in lifting the blockade of the Kuweires military air base east of Aleppo city. What comes next? What is the significance of this step, and what repercussions might it have on the conflict raging in Syria? Also, what is the relationship between this advancement and Russia's military participation in Syria? Wassim Bazzi, a political analyst and expert in the field and military situations in Syria, explained the bigger picture to Al-Monitor.

“Since Russia became engaged in the military operations in Syria, its air raids have helped the Syrian army and its allies — whether the [Islamic] Revolutionary Guard Corps [IRGC] or the Hezbollah militants — to achieve progress on the ground,” Bazzi said. “Since the first week of October, these forces have been trying to advance along three main axes.”

The first axis, he said, started in the countryside of Latakia governorate. The Syrian army achieved its first advancement there, to the east during the second week of October.

“It took over the strategic town of Ghamam, which is situated at an altitude of 1,300 meters [0.8 mile]. Ghamam constitutes a pivotal location that separates the positions of opposition militants in the northern Kurd Mountains and the southern Turkmen Mountains,” he said.

“The Syrian army then managed, during the first week of November, to confirm its victory in the battles in mountainous areas. It tightened its grip on Kaddash Mountain and drew closer to Burj al-Qasab, which is a high and strategic summit in Latakia countryside, as it overlooks Sahel al-Ghab. The latter is a highly important region whose control would provide protection for the whole Syrian coast from the east, especially Latakia. It would also allow the regime to aim for the borders with Turkey, which are only a few kilometers away,” he said.

“In addition to regaining control of Kuweires air base Nov. 10, the Syrian army has simultaneously tightened its grip on other summits, such as Job al-Ahmar. This means that the army is effectively planning to close this part of the Turkish-Syrian border that extends along approximately 910 kilometers [565 miles] and starts from Kessab town in the west of Latakia to reach Idlib, Aleppo, Raqqa and Qamishli,” he added.

He said, “The Syrian army and its allies, Hezbollah and the IRGC, launched the Aleppo offensive during the second week of October from the northwest Hama countryside toward the southern Idlib countryside. The battle made some advancement at the beginning, but suffered several setbacks later. The army and its allies controlled Murak city and six other villages in the Hama countryside, aiming to reach Khan Shaykhun village, which has an important location in the southern Idlib countryside and is about 12 kilometers [7 miles] from Murak. However, the militants launched a counterattack on the Syrian army soldiers on this axis and pushed them to retreat from Murak on Nov. 5. As a result, the attacks on this axis stopped.”

This is where the importance of the third axis — the eastern Aleppo countryside — became evident. The Syrian army and its allies began the battle there with cover from Syrian aircraft.

“During the second half of October, action along this axis started from Aleppo’s southern countryside, where the Syrian army advanced from as-Safira town and moved east. The army was able to control around 30 small villages, including Tel Naam, al-Nasiriyah, Jdeida, Bakisha, Tel Sabin and others, until it controlled around 350 square kilometers [135 square miles] of Aleppo’s eastern countryside. The army then arrived close to Hader village, which is one of its strategic goals,” Bazzi said.

“Hader has the largest concentration of Jabhat al-Nusra, Ahrar al-Sham and Jabhat al-Asala wal Din militants. These are the main components of Jaish al-Fatah, which controls those regions.”

After Kuweires, the Syrian army gained control of Hader on Nov. 12, as Bazzi had expected. He also expects the fall of two other nearby towns, Zerbeh and al-Eis.

Taking over Hader gives the Syrian army control of a facility run by the International Center for Agricultural Research in the Dry Areas. Also, now the army can tighten its grip on the Aleppo-Damascus road so it can prepare to enter the northern and eastern Idlib countrysides to get closer to the strategic city of Saraqib.

The Syrian army was unable to reach that axis via Murak as it first planned, so now it will try to reach it from the Aleppo countryside.

Therefore, Bazzi noted, “Lifting the siege off Kuweires air base constituted the most important military, field and strategic accomplishment since the start of the Russian intervention Sept. 30. This step carries a psychological significance, as it allowed the Damascene regime to free around 2,000 soldiers who had been under siege for two years.”

Kuweires is one of the largest airports in Syria and includes an air academy. It is 25 miles east of Aleppo and is surrounded by a natural water canal on three sides. Controlling Kuweires is an important step toward controlling three villages to the east: Manbij, al-Bab and Jarabulus, Bazzi said. Those towns are important to IS because they are along the Turkish border — meaning they can provide a main crossing place “for all radical militants in the world who come from the Turkish Gaziantep city and enter the Aleppo countryside to reach the IS caliphate capital in Raqqa. The control of Kuweires air base is expected to block the Raqqa-Aleppo road later,” he said.

“The Syrian army would then be able to reach the western and northern countrysides of Aleppo. As a result, the eastern part of the city, which is occupied by militants, would be under the army’s complete siege from both countrysides, as well as from the western Aleppo side controlled by the army also,” Bazzi said.

“Moreover, the total restitution of Aleppo holds a bigger geographic meaning for Syria, as it would foil all projects to divide the country and would kill [Recep Tayyip] Erdogan’s dream to control Aleppo and Mosul. It would also be a step toward isolating the Turkish side completely from Syria,” he added.

Bazzi concluded, “We should wait for the upcoming field developments. Notably, the Russian military intervention bore its first fruits in Kuweires air base Nov. 10.”

It seems clear that the main ongoing battle in northern Syria is the battle for Aleppo, the second-biggest Syrian city in terms of area and population that is close to Turkey. According to Bazzi, the party that wins this battle will win the fight for Syria.