How will Jordan's pivot to Russia pay off?

Jordan and Russia have agreed on military coordination in Syria after a long silence in Amman about Russian intervention there. 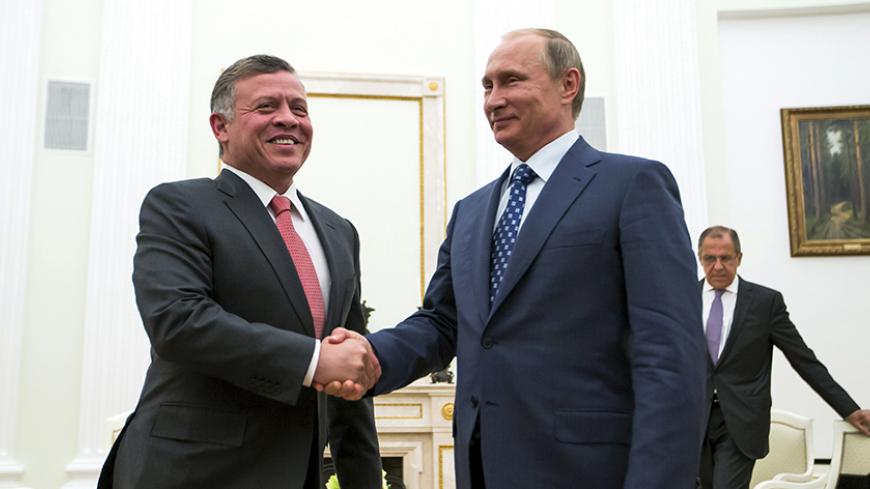 After weeks of avoiding public comment on Moscow’s military intervention in Syria that started Sept. 30, Jordan and Russia made a surprise announcement Oct. 23 that both countries had agreed on military coordination in Syria through a joint mechanism.

The announcement was made in Vienna during a press conference held by Russian Foreign Minister Sergey Lavrov and his Jordanian counterpart, Nasser Joudeh. The latter said that he hoped that “coordination between the Jordanian and the Russian armies will be effective against terrorists of all shades,” adding, “There are deep coordination channels between Jordan and Russia over Syria.”

Lavrov said that under the agreement, “The militaries of the two countries have agreed to coordinate their actions, including military aircraft missions over Syrian territory.”

On the same day in Amman, government spokesman Mohammad al-Momani told Ammon news agency that coordination with Russia “aims at safeguarding the kingdom’s northern borders and stability in southern Syria.” But he stressed that Jordan remains part of the international anti-terrorism coalition.

Commenting on the agreement, Jordan’s Ambassador to Moscow Aiad al-Majali was quoted by Reuters as saying that establishing a “special working mechanism” to share information on Syrian operations increases military cooperation between the two countries to an unprecedented level.

Jordan, a close ally of the United States, has maintained close contacts with the Kremlin in recent months, especially over pursuing a political solution to the Syrian conflict. King Abdullah visited Moscow on Aug. 25 and reportedly told President Vladimir Putin that Russia had a vital role to play in bringing together rival sides in Syria to seek a solution to a war that has killed a quarter of a million people.

Relations between Amman and Moscow have been growing rapidly and on March 24, Jordan signed a $10 billion deal with Russia or the building of the kingdom’s first nuclear power plant, with two 1,000-megawatt reactors. The deal, a strategic one for the energy-starved kingdom, followed many months of negotiations.

Analysts here have focused on the political and military significance of the latest agreement to coordinate on Syria. Jordan has special ties, including training and arms supplies, with the Free Syrian Army in southern Syria and its spokesman resides in Amman. The southern front has been quiet for months and Jordan would like to keep it that way.

The FSA has acted as a buffer between Jordan’s north and extremist groups such as Islamic State militants and Jabhat al-Nusra fighters. Some political commentators, such as Orieb al-Rintawi and Fahd al-Khitan, say that part of the coordination with Moscow is aimed at avoiding stirring up the southern front.

After initially questioning the extent of the group’s presence on the ground in Syria, Lavrov announced Oct. 24 his country’s readiness to provide air cover to the FSA in its fight against IS.

But the FSA rejected the Russian offer and a spokesman for the southern front, Issam al-Rayyes, told Reuters, "Their words are not like their actions. How can we talk to them while they are hitting us?"

Rintawi told Al-Monitor that Jordan’s initial silence over Russia’s military intervention in Syria “is an indication of its tacit approval of Moscow’s role and is a reflection of Amman’s cautious approach to the Syrian conflict.”

He said that Jordan has kept as far as possible from “axis wars” in Syria because it believes in a solution that would maintain Syria’s territorial integrity and prevent its disintegration “with or without [President] Bashar al-Assad.”

Rintawi said that Russia and Jordan have developed a common approach on Syria, one that makes defeating the jihadis a priority and “that also serves Amman’s interest in keeping the northern borders of the kingdom outside the cycle of violence for as long as possible,” he said.

Khitan has praised the agreement, saying in an Oct. 25 article in Al-Ghad that it has given Jordan “a sizable margin in foreign policy maneuverability without compromising its external relations and alliances.” He wrote, “At the regional level, there were no reservations against the agreement since all other parties are engaged in discussions with the Russian side and the United States was the first country to coordinate with Russia’s military in Syria.”

Khitan concluded that Jordan will achieve a number of gains from the agreement, including playing a part in any political settlement, especially with regard to the refugees, protecting its northern borders against terrorist infiltration and coordinating with the Russian side so that moderate opposition groups such as the FSA are not targeted.

Rintawi said that Jordan’s value to the Russians would soon become clearer “since Amman can mediate with tribes and moderate fighters in southern Syria to come up with national reconciliation terms that would pacify the south and provide a model in other areas.”

Sure enough, since the agreement was made public, Jordan has been included in consultations and meetings over Syria. Putin briefed Abdullah on the result of Assad’s surprise visit to Moscow on Oct. 22, and Amman was invited to a broad Oct. 30 meeting on Syria that took place in Vienna. For now, Jordan’s recent pivot to Russia appears to be paying off.