While some Republican presidential candidates have been quick to declare a war on radical Islam, there has been little focus on the causes behind its rise. 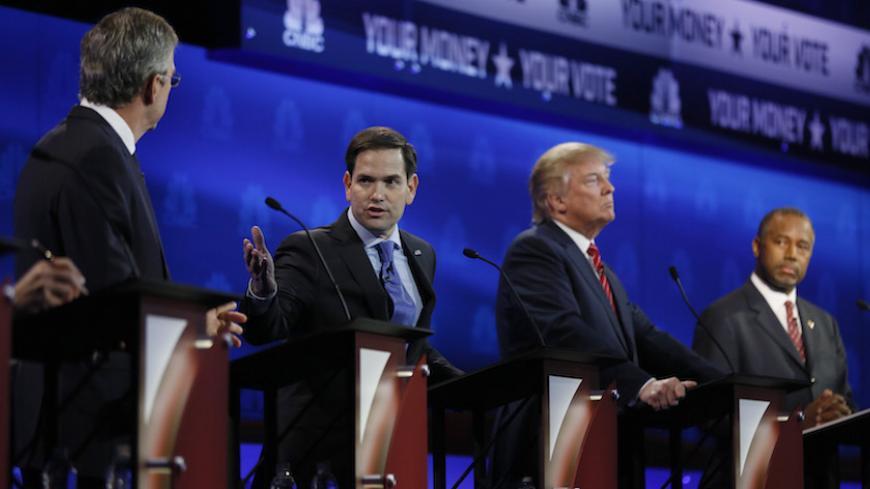 The terrorist attacks in Paris have unleashed a torrent of anti-Islamist rhetoric in the United States that casually dismisses the well-documented grievances that attract would-be jihadi fighters.

While the Democratic presidential candidates all refused to say the United States was at war with "radical Islam" during their Nov. 14 debate, the Republicans had no such qualms. Sensing a political opening, some went further and warned of a "civilizational" struggle — rhetoric that some experts caution plays right into the Islamic State playbook.

"It is a particular form, radical Islamism, that takes the view that anyone that doesn’t embrace their radical Islamic view must be murdered or forcibly converted," Sen. Ted Cruz, R-Texas, told Fox News on Nov. 14. "That’s what we’re seeing happening in Paris. It’s what we’re seeing happening in Israel, and I’m sorry to tell you, this will be coming to America."

Former Florida Gov. Jeb Bush skewered Democrat Hillary Clinton for not saying "Islamic terrorism" — even though his brother, George W. Bush, also avoided the term when he was president.

The comments left some Middle East experts shaking their heads.

"I think it shows that certain American politicians just don't have a basic understanding of the threat that we face," said Shadi Hamid, a senior fellow at the Brookings Institution's Center for Middle East Policy. “[IS] wants to provoke a clash of civilizations. That's the intent. So when we use similar language, we're falling into their trap. [IS] wants to create a rift between French Muslims and the broader population. They want to be able to say to French Muslims, 'Look, you'll never be accepted in France as equal citizens, come with us.'”

Others warns against focusing singularly on the IS ideology to the detriment of the root causes that attract disaffected youth in the first place. After all, many Westerners have traveled to the killing fields of Syria without even a rudimentary understanding of Islam.

"The ideological component is important and vital, to be sure — but to look at it alone is to miss a large number of factors, which are also important," said H.A. Hellyer, a senior fellow at the Atlantic Council in Washington and the Royal United Services Institute in London. "Muslim communities at large are not attracted to [IS] ideology — but large parts of them are likely to have sympathy for grievances such as the Israeli occupation of the Palestinians, and the Assad regime’s brutal policies in Syria. Denying that those grievances are actually important won’t help anyone in the counterterrorism struggle."

The Obama administration endured such a backlash earlier this year when a State Department spokeswoman mentioned job creation as a useful tool to combat IS recruitment. And last year, Secretary of State John Kerry caused an uproar in Israel when he said the lack of progress on Palestinian statehood was "a cause of recruitment and of street anger and agitation."

"It turns out that even when a British Muslim beheads a British Christian, there will always be those who blame the Jews," Economy Minister Naftali Bennett said after video of Western captives by the so-called Jihadi John became public around the time of Kerry's comments.

In addition to political grievances, many young Muslims in Western Europe — and France in particular — feel personally discriminated against, former British jihadi Maajid Nawaz told CNN's Fareed Zakaria on Nov. 15. Nawaz regularly skewers those on the left who argue IS has "nothing to do with Islam," but says he himself was radicalized at 16 because of outrage at the West's failure to stop the Serbs from massacring Muslims in Bosnia and a sense of racist discrimination at home.

"Jihadist extremism is the new Zeitgeist of the anti-establishment, angry youth. Many even convert to Islam to join them," Nawaz told CNN. "A few factors come into play here when they're joining this phenomenon. One of them is a sense of grievance or anger — a perceived sense, ultimately — of grievance or anger. Another is an identity crisis."

The growing backlash against President Barack Obama's plan to accept up to 10,000 Syrian refugees also risks playing into that narrative, according to the administration. Cruz and Bush both called on the United States to only accept Christian refugees from Syria, while fellow candidate Mike Huckabee said new House Speaker Paul Ryan, R-Wis., should resign if he can't block Syrian refugees from coming in.

"When I heard political leaders suggest that there would be a religious test for which a person who's fleeing a warn-torn country is admitted … that's shameful," Obama told reporters Nov. 16. "That's not American. That's not who we are. We don't have religious tests to our compassion."

Hamid questioned whether Rubio truly believes what he's saying. The hawkish member of the Senate Foreign Relations Committee after all has been a persistent critic of Obama's reluctance to do all that is necessary to remove Syria's Bashar al-Assad.

The senator's own website lists a "political" component to the war against IS. His plan says the United States should "work with Baghdad to increase Sunni inclusion and autonomy for the provinces; push back against Iranian influence in Iraq, which only stokes further conflict; [and] coordinate with regional allies to plan for Assad’s fall."