What will Erdogan do if AKP fails again?

The prospect of yet another snap election in Turkey after the Nov. 1 polls should not be ruled out if the AKP fails again to clinch the parliamentary majority. 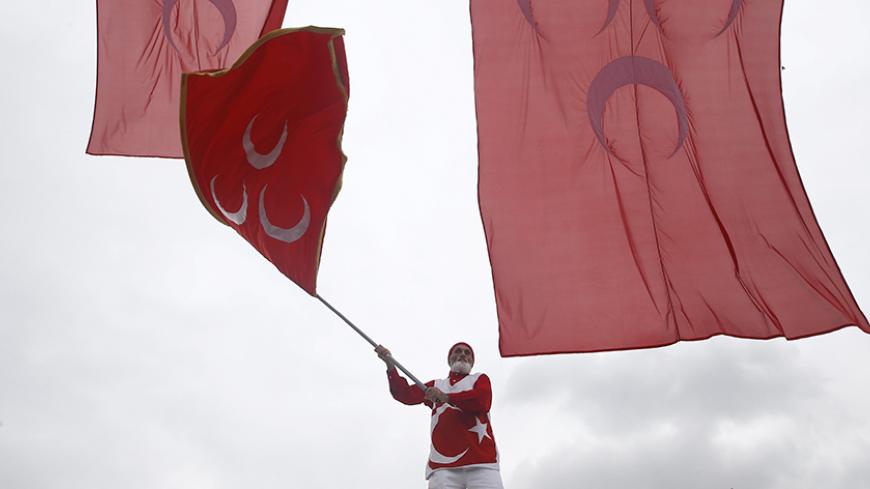 A supporter of the Nationalist Movement Party waves the party flag during a rally for Turkey's general election Nov. 1, in Istanbul, Turkey, Oct. 18, 2015. - REUTERS/Osman Orsal

Turkish President Recep Tayyip Erdogan’s political acumen is beyond dispute. It is already working wonders to spin the potential failure of his Justice and Development Party (AKP) in the Nov. 1 polls as a victory.

In an Oct. 17 speech, Erdogan made it known he will claim a personal victory even if the AKP repeats its June 7 failure to win a parliamentary majority, as expected. Lashing out at opposition leaders for refusing to visit his newly built palace, often called the “illegal palace” for its dubious construction, he said, “May stones as big as the ‘illegal palace’ fall down your heads. ... Sooner or later, you’ll come — like lambs. You can’t help but come.”

What could leave opposition leaders as helpless as lambs and make them go to the presidential palace? Becoming coalition partners or receiving the mandate to form the government, of course.

The head of the main opposition Republican People’s Party (CHP), Kemal Kilicdaroglu, must have also sensed he could be invited to the palace after the elections, for two days later he responded in kind: “Don’t you worry. He’ll give us the mandate willy-nilly.”

So, what election result could make Erdogan acquiesce to the AKP entering into a coalition? If Turkey were a functioning democracy, the answer would be as simple as the AKP’s failure to win a parliamentary majority to form the government on its own. Yet, from the aftermath of the June 7 polls we know things don’t work that way. Although parliamentary arithmetic dictated a coalition government, Erdogan used his political clout to prevent its formation, taking Turkey to fresh elections in a bid to win back his one-party government.

Hence, the result that could finally make Erdogan acquiesce to a coalition would be one that convinces him he has exhausted all his political tools and cannot pull it off, no matter what he tries. And this could happen only if the AKP gets less than the 40.8% it garnered June 7.

Such an eventuality is likely to force Erdogan to seek a coalition between the AKP and the far-right Nationalist Action Party (MHP). He might have agreed to this formula after June 7 — of course, seeking early elections at first opportunity — had MHP leader Devlet Bahceli not put forward some tough preconditions. If a coalition becomes inevitable after Nov. 1, the MHP is Erdogan’s preferred choice.

An AKP-MHP coalition would allow Erdogan to eat into the MHP base, which shares the same social and cultural profile as the AKP electorate. Experience has proved that the small partner usually comes out the loser when parties with similar bases form a coalition.

Moreover, the hawkish MHP is opposed to any kind of negotiations with the Kurdistan Workers Party (PKK), advocating solely the military solution. With the MHP in power alongside the AKP, ending the conflict with the PKK would become an even more-distant possibility.

Then there's the unlikely possibility of an AKP-CHP coalition. AKP chairman Ahmet Davutoglu might be willing, but Erdogan’s approval would depend on certain conditions. The only way that coalition would happen is if the MHP snubs the AKP, leaving the AKP with no other option.

The AKP sharing power with the CHP or the MHP would result in a definite, irreparable loss of power for Erdogan. A “great coalition” with the CHP, in particular, would mean a coalition partner representing the Alevi and secular segments in more ministerial seats than the MHP can take, which would ease tensions in the country and result in an even greater loss of power for Erdogan.

Of course, all these possibilities depend strictly on the AKP falling below the 40.8% mark. Almost all the latest opinion polls place the party in the 41-42% range. This percentage, however, would still not be enough to secure the parliamentary majority. The conundrum has become a betting issue in Turkey. Will Erdogan take the country to a third election if the AKP gets more than 40.8%, increasing the number of its parliamentary seats but still falling slightly short of the majority required for a one-party government?

Observers who attribute a certain degree of rationality to Erdogan believe he will refrain from doing so. Their optimism rests on the assumption that a rational decision-maker could foresee that the climate of uncertainty that would be spawned by a third election would further destabilize Turkey and make its economy even more vulnerable. Alternatively, those who see Erdogan as an irrational player whose political decisions on the issue cannot be predicted warn that the country should be ready for possibilities that go beyond reason, if not imagination.

In this sense, Erdogan could well take Turkey to a third election, under another interim government, probably in early April, after obstructing the formation of a coalition in the 45-day period the prime minister-designate would have. Let’s mention here that Erdogan could alternatively try to transfer lawmakers from the MHP to fill the AKP shortage of seats for the parliamentary majority.

And then let’s continue with a question: What’s the difference between Turkey ahead of the June 7 polls and Turkey on the eve of the Nov. 1 vote? How can the difference sway Erdogan’s decision?

No doubt, the climate has worsened since June 7. First, the government forces were not in a state of war with the PKK ahead of the June 7 polls. The conflict, which resumed July 24 with Turkish jets bombing PKK bases in northern Iraq, has resulted in hundreds of dead on both sides and claimed scores of civilian lives.

Second, there have been deadly terrorist attacks blamed on the Islamic State. On July 20, a suicide bomber killed 32 leftist activists in Suruc on their way to Kobani across the Syrian border. The attack was the spark that reignited the war with the PKK. On Oct. 10, a peace rally in Ankara organized by trade unions, political parties and civic groups urging an end to this war was hit by twin suicide bombings that claimed 102 lives.

In the meantime, the Turkish currency kept fluctuating against the dollar under the strain of political uncertainty and violent unrest, among other factors.

Despite all this deterioration, the increase that pollsters measure in the AKP’s electoral support can have only one explanation: Some voters have given up their demand for political change in the face of instability, internal conflict and terrorist threats, opting to continue the Erdogan regime. True, the increase is a small one, not enough to secure the parliamentary majority. But if the election outcome confirms the opinion polls, the current holders of power may well come to believe they can win the next election if the climate of conflict continues for some time. Thus, even a small increase in the AKP votes on Nov. 1 could take Turkey to even worse and riskier ground.