In the battle over municipal funding and tax breaks, Likud ministers side with the powerful settler lobby. 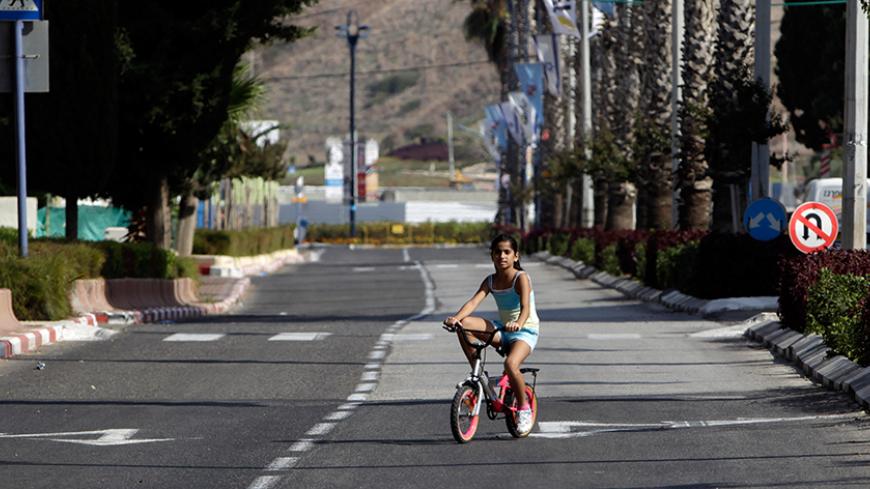 A girl rides her bike on an empty street during the Jewish holiday of Yom Kippur in the northern Israeli city of Acre, Oct. 8, 2011. - REUTERS/Ammar Awad

In the political storm that erupted in recent days following the emerging agreement to reduce income tax benefits to the country’s peripheral communities, the absence of Likud ministers and Knesset members is conspicuous. This is especially true for those Likud ministers and Knesset members who proudly consider themselves — the way they see it — as champions of a ''social'' agenda. Thus, one would have expected Ministers Miri Regev and Haim Katz, who never miss an opportunity to portray themselves as social welfare fighters in the government, to raise their voices against the intended changes. As of now, the government intends to reduce tax breaks to cities such as Nahariya, Acre and Maalot Tarshiha — cities in which the Likud Party had won a majority of votes in the March 17 elections, while adding the Jewish settlement of Hebron to the tax benefit list.

The Likud’s top brass shares especially close relations with the settlers, led by Yossi Dagan, the head of the Samaria Regional Council; Dagan is viewed as one of the heavyweights in the Likud Central Committee. Thus, the Likud higher-ups prefer to count themselves out of the tax benefit game so as not to suffer political fallout.

Thus, the regional heads of the periphery communities find themselves out on a limb. They are waging an almost futile battle against the problematic decision, which has dramatic ramifications for residents of periphery communities: a loss of thousands of shekels in annual income per family.

Prior to the Finance Committee’s official authorization of the localities that will enjoy income tax benefits, the periphery mayors have set up a campaign headquarters. It will be interesting to note, in the coming days, who among the senior Likud figures will go to the trouble of supporting them. After all, the Likud higher-ups did visit the protest encampment of the Judea-Samaria residents opposite the prime minister’s office at the beginning of the month. High-placed Likud ministers went on a pilgrimage to the encampment Oct. 6, and in effect took part in the struggle against government policy regarding the wave of terror.

It was an absurd situation: Ministers such as Haim Katz, Yariv Levin and Ze’ev Elkin demonstrated against the government they are part of. But their bonds to the settlers and to Dagan outweighed their commitment to the coalition. The math was simple: The settlers constitute an organized pressure group in the Likud Central Committee and in other party institutions, and they have the power to decide which Likud members will receive higher positions on the party’s list for the Knesset.

Prime Minister Benjamin Netanyahu is also committed to the settler community and faces pressure from the HaBayit HaYehudi faction; therefore, he needs to be very creative in finding ways to calm the atmosphere. On Oct. 26, it was made public that Netanyahu had appointed Tourism Minister Yariv Levin, darling of the settlers, to be responsible for finding a budgetary compensation mechanism for the settlements of Judea-Samaria because these are not included in the new tax break map — as opposed to Hebron, which is included.

A discussion was held Oct. 25 in the prime minister’s office with the participation of the coalition faction heads. At the meeting, it was decided to add about another 230 localities to the list of 182 localities on the tax break list Oct. 27. However, the budget itself was not increased; thus, the original localities on the list will see a significant reduction in their tax breaks. It is true that at this stage the settlements are not included (except for Hebron), but Dagan has already put all his political weight on senior Likud officials and HaBayit HaYehudi party leaders in an attempt to change the situation. Reportedly, Dagan already argued this week that “the Israeli government is turning Judea-Samaria residents into third-rate citizens.” Meanwhile, the Jewish community in Hebron is already on the list, and the periphery cities would probably be the ones to foot the bill.

The mayors of affected cities also began a struggle in an attempt to pressure the ruling party. Acre Mayor Shimon Lankri turned to the prime minister in writing and warned him that the proposed changes constitute a catastrophe for his city: It is likely to severely affect the city’s continued development and cause negative emigration. Lankri is a Likud member. He has returned to the party after leaving it for the Kadima Party (when Kadima was established and headed by Prime Minister Ariel Sharon, who left the Likud), exactly as did Nahariya Mayor Jacky Sabag. In the recent elections, the Likud won in these two cities with a tremendous majority. With regard to Nahariya, the city is in the friction-zone close to Israel’s northern border with Lebanon (thus usually entitling it to special benefits and funds). Sabag told Yedioth Ahronoth Oct. 26, “This is a severe blow that will bring disaster and destruction on many, and will turn back the clock by 15 years. It is simply unacceptable that residents of the periphery who voted for Prime Minister Benjamin Netanyahu and Finance Minister [Moshe] Kahlon will be the ones who are victimized.”

However, the impression is that Lankri and Sabag’s struggle is too courteous. It is not clear why they choose to restrain themselves from throwing the truth in the faces of Likud superiors and waging an aggressive media war — the only thing that could possibly effect real change.

It is enough to peruse the 2015 election results to recall the fact that the Likud headed by Netanyahu won an overwhelming majority in the periphery cities; in effect, they were the ones who granted Netanyahu his big victory. In the past, the social periphery had been Likud’s most important political home front; it was the periphery that led to the political changeover in 1977 (when the Likud won against Labor). Mayors of the periphery localities constituted the Likud’s leadership “reserves,” and brought what had been called “the second Israel [those from the periphery, of Mizrahi origin and immigrants]” to the front of the stage. But in recent decades, and especially in the last 10 years, the organized political power of the periphery in the Likud has declined. Instead, a new power base has risen: large organized groups of settlers and extreme-right people who registered as Likud Party members. These became Likud’s kingmakers, and powerful elements in determining the list for the Knesset. This is the source of radicalization in the highest echelons of the Likud.

Leaders of periphery communities have no organized, significant political power in the Likud. Therefore, they have become taken for granted, a kind of captive audience, and are the main casualties of the infuriating priority list of the Likud government.