The Russian Orthodox Church's description of Moscow's intervention in Syria as a "holy war" has created a buzz among Lebanese Christians. 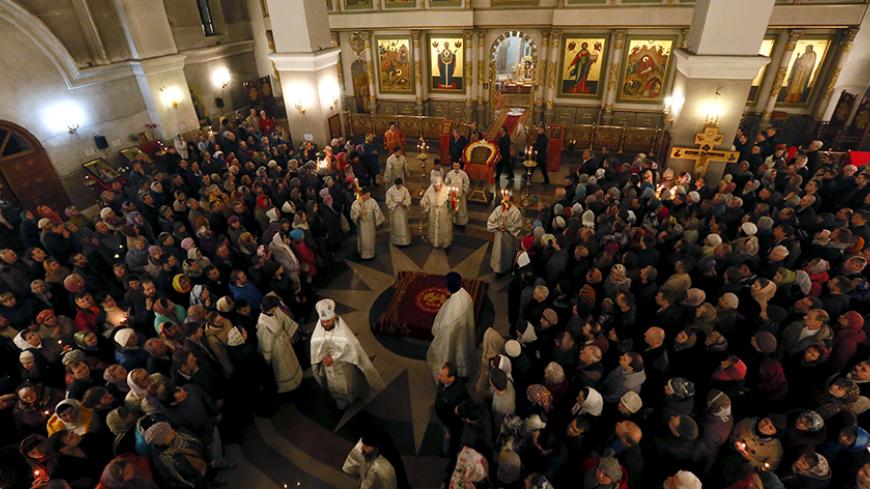 An Oct. 16 statement by the Russian Orthodox Church declaring Russia's intervention in Syria a “holy war” has sparked considerable debate and concern in Lebanon and other parts of the Arab Mashreq given the possible repercussions for the existence and role of Christians in the area. The church's position was quickly countered by a Muslim campaign calling for Islamic jihad. Jabhat al-Nusra Sheikh Abu Hassan al-Kuwaiti offered 1 million Syrian pounds (approximately $5,300) to anyone who abducts a Russian soldier, while Sheikh Yusuf al-Qaradawi, chairman of International Union for Muslim Scholars, complained, “If we defend our homelands and our homes in the name of Islam, which we believe in, we are accused of terrorism, yet Russia is bombing Syria and the opposition under the auspices of holy war.” The buzz in Lebanon about the statement comes as no surprise. After all, Lebanon is a Middle Eastern country with a prominent Christian community in terms of its political representation and historical role.

This is not the first time that religious authorities and movement leaders have tackled the sanctity of wars in the region. The history of the ancient Mashreq is riddled with examples. More recently, during a speech in 2014, Iran's supreme leader, Ayatollah Ali Khamenei, raised the banner of “Sacred Defense” in summing up the “story of the Iranian people’s resilience.” Much earlier, in January 2009, Osama bin Laden had called for jihad to stop an Israeli war on Gaza. On July 2 of this year in Yemen, Houthi leader Abdul Malik al-Houthi implored his supporters to wage holy jihad to confront the military campaign led by Saudi Arabia, which is heading a coalition to support Yemeni government forces. In other words, the region has been the site of numerous calls for jihad by Sunnis as well as Shiites.

What has surprised everyone about the Russian statement is its being issued by a Christian religious authority. This is unusual for the Middle East and brings to mind the Crusades, fought between the 11th and 13th centuries and backed by the Catholic Church. The place of the Crusades in the collective memory of the peoples of the Mashreq is common knowledge, as is awareness of the deep and still raw wounds they left behind.

The Russian Orthodox statement nonetheless produced a few positive echoes among Christians in Syria and in particular in Lebanon, where some members of the community, mainly members of the March 8 coalition, which includes the overwhelmingly Christian Free Patriotic Movement, support the Bashar al-Assad regime. Regardless of the reasoning behind this support for Assad — be it out of a conviction that the regime is needed to protect minorities from extremist groups or due to motives related to political conflicts in Lebanon — according to the local press, some of Assad’s Lebanese supporters are betting on Russia’s intervention to position a pro-Syrian candidate for the Lebanese presidency. Thus for them, this issue is not only whether the Russian church's position is to justify or cover Moscow’s pro-regime actions. The Russian military intervention is being used in the Lebanese political equation, as evidenced by pictures of President Vladimir Putin being raised during a Free Patriotic Movement demonstration Oct. 11.

Countering the Russian church's position on the sanctity of military operations in Syria, Elias Audi, metropolitan bishop of the Greek Orthodox Church for the archdiocese of Beirut, declared in an Oct. 18 sermon, “Those who kill shall not be blessed. Human life is the preserve of the Lord, and he who kills humans in some way intends to kill the Lord.” He further stated, “The church does not bless wars and does not qualify them as sacred. It does not sanctify wars and does not accept such statements.”

In the same vein, Tarek Mitri, a prominent Orthodox intellectual close to the church, issued a set of positions against the church as a propaganda tool for the politically powerful and highlighted Moscow's contradictory positions on foreign intervention. On Oct. 2, Mitri, also a former government minister and director of the Issam Fares Institute at the American University of Beirut, tweeted, “Russian intervention is to defend Assad or bring him to negotiation in a position of strength. Defense of Christians is domestic propaganda.” A few seconds earlier, he had tweeted, “Russian Church used a peace language against the 2003 US war on Iraq. It uses today the language of ‘holy war’ in support of Putin in Syria.”

Antoine Courban, an anthropologist who signed a petition by Orthodox intellectuals published Oct. 17 denouncing the Russian Orthodox statement, told Al-Monitor, “The ​Eastern Orthodox Church does not believe in the sanctity of wars, as opposed to the Russian Orthodox Church, which blessed the taking up of arms, probably based on the thought of St. Augustine.” The fourth-century philosopher-bishop introduced the idea of ​​just war to theological philosophy, and the Catholic Church used it to justify its crusades.

The aftershocks of the Russian Orthodox statement traveled beyond Christians, troubling other minorities as well. Druze leader Walid Jumblatt on Oct. 24 saluted Metropolitan Audi and Georges Khodr, Greek Orthodox bishop of Mount Lebanon, who, according to him, “represent the conscience of the Eastern Orthodox Church, its free voice and broad horizon at a time when isolation and extremism are sweeping across the whole world and the Arab and Islamic region in particular.” Jumblatt further asserted, “The Islamic State [IS] cannot be confronted with a Christian IS.”

Whatever the doctrinal position of the Russian Orthodox Church, its sanctification of the war being waged by Putin in Syria represents politics par excellence. Its primary intent is to serve the Kremlin leader, and it was probably made upon his request. That said, the positions voiced in Lebanon, for and against the statement, have also been political.

The statement by the Eastern Orthodox Church members was not aimed at sparking a (figurative or literal) “byzantine” debate, but at protecting Orthodox Christians from the religious wars plaguing the Islamic Mashreq communities. The church is no doubt aware that minorities are the weakest in this deadly international game and the most likely to pay a price. If Putin loses, revenge will be the name of the game, and minorities could face reprisals. If he wins, grudges will be settled, and grudges in the Arab world are ticking time bombs.