Russia is apparently establishing its first air base in the Middle East, at Jableh, Syria, a move that would change the rules of the game in the region. 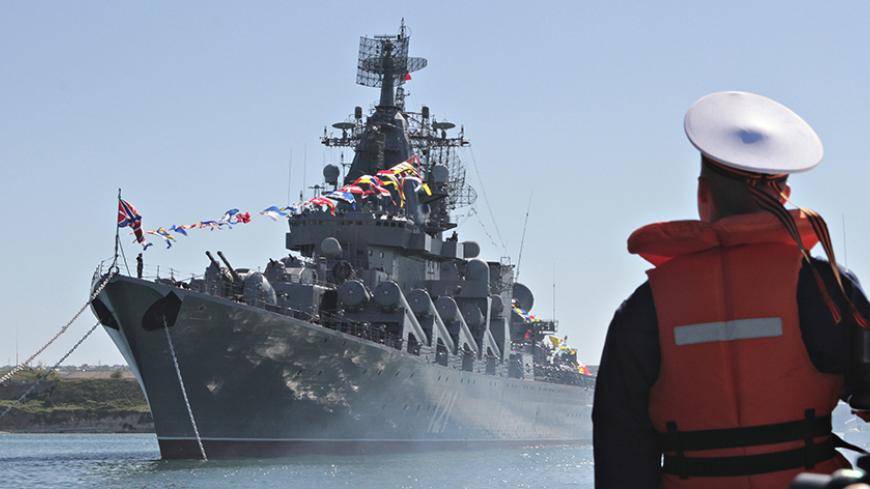 A sailor looks at the Russian missile cruiser Moskva moored in the Ukrainian Black Sea port of Sevastopol, May 10, 2013. Russia is sending two warships to the eastern Mediterranean, Interfax news agency said on Aug. 29, 2013. - REUTERS

Russia's less-than-transparent intentions in Syria could put a damper on Turkey's very clear desire to establish a safe zone north of Aleppo. Although official Syria has been silent, local sources say it appears Russia aims to establish its first military air base in the region, and there are unofficial reports that the harbor of Tartus might be extended. Such changes could alter the regional balance of power.

"Syria has completely redone Latakia airport," journalist Thierry Meyssan, who writes for Al Watan, told Al-Monitor in an email. "The ground was leveled. A new runway was built for Russian aircraft. Sheds have been installed to house the aircrafts." Meyssan said workers also are building housing.

"Work began at the beginning of August and continued day and night. They should be finished in a few days," he said, adding that Russia has begun delivering "more sophisticated weapons and especially satellite images."

"This information will profoundly change the situation. So far only the jihadists had satellite images."

Damascus-based journalist Mehmet Serim also has reported on the intensive work being done at the Latakia airport in Jableh, officially known as Bassel al-Assad International Airport. Serim, who shared with Al-Monitor some of the information obtained from local sources, confirmed the 3-kilometer runway at Jableh was too short for some Russian planes, so work was quickly carried out to extend it. Local speculation is that there are already some 3,000 Russian personnel at Latakia.

Then there is Tartus. Russia is currently using the naval base, south of Latakia. Although unsuitable for particularly large vessels, the base is seen as a symbol of military cooperation between Russia and Syria. There is also a Russian radar base at Tartus. Moscow, which has had military cooperation with Damascus since the era of former Syrian President Hafez al-Assad, renovated and refurbished the Tartus base in 2009. Meyssan said he has heard the harbor might be extended there, and others say Russia might be planning to relocate the base entirely.

According to Serim, there is talk of moving the Russian naval base at Tartus to Rmaileh, north of Jableh. Large Russian ships currently have to be unloaded at Latakia. Relocating the base to Rmaileh would resolve the capacity problem and provide the Russian military deployment with a more integrated structure. If the Russians move from the Tartus port, which has good connections to inland Syria, it would be turned into an international port and declared a free-trade zone.

Some Western sources interpret Russia's increased military presence as just another effort to support the Bashar al-Assad regime, or a move toward joining the international anti-Islamic State coalition. But there appears to be even more activity taking place.

The pro-government daily Al-Watan has reported on Russian plans for a second military base at Jableh. And in an Al Arabiya article, Theodore Karasik reported that, according to an official with the Gulf Cooperation Council, that plan includes deployment of 2,000-3,000 Russians who will serve as instructors, advisers, logistics specialists, technical personnel and MiG-31 pilots. Russia, acknowledging that it has military experts in Syria assisting the army with weapons use, stated, “Russia has never made a secret of its military technical cooperation with Syria.”

A strategic position in Jableh certainly would affect events on the ground. Russian radar is currently monitoring the movements of Syrian opposition forces near the Turkish border. A Jableh base could offer Russia the possibility of more effective and faster intervention in Syrian crises. Al-Watan reports that for now, Russia is providing the regime with satellite images and collecting information to assess deployment of the international coalition.

Russia's moves relate directly to Turkey’s efforts to create a safe zone north of Aleppo in northern Syria. Russia opposes the zone, which would be located about 93 miles from Jableh.

For the time being, Ankara has devoted its military capacity to operations against the fighters of the Kurdistan Workers Party, but it has not forgotten its plans and ambitions for the buffer zone. Ankara is even using the refugee crisis playing out in Europe to promote the idea of a safe zone. For example, Prime Minister Ahmet Davutoglu, speaking about 3-year-old Aylan al-Kurdi, whose body washed up on the Turkish coast, said, “For four years, we have been trying to persuade the West to establish a safe zone to protect Syrians. The lifeless body of the toddler Aylan is the last warning.”

As the European Union tries to cope with the wave of refugees, Ankara welcomed a comment by British Prime Minister David Cameron that “British soldiers could be deployed in safe zones to be set up for Syrian refugees.” Such a zone cannot work without US concurrence and having dependable partners on the ground.

Although it might appear the Russian activity at Jableh is designed to boost Syrian army operations, to strengthen the regime's political efforts and fight against IS, the long-term goal is a new military strategic balance in the region.

As Baghdad’s attitude is not much different from Tehran’s, an Iran-Iraq route gives Russia room to maneuver. Since October 2012, when Turkey forced Russian planes to land to be searched, Russia has been avoiding Turkish airspace en route to Syria.

Moscow's military activity comes at a time when Russia is also pressing for a political solution to the Syrian war. For some time now, Moscow, by trying to reduce the Syrian crisis to combating terrorism, has been probing the possibility of the Assad regime forming a partnership with some part of the opposition.

On Sept. 4, Reuters reported Russian President Vladimir Putin as saying, “We really want to establish some kind of international coalition to fight terrorism and extremism.” He added that Moscow is looking at options, implying Russia intends to become a military player in Syria. Putin also spoke of Assad’s acceptance of a Russian plan for a peaceful settlement, stating, “The Syrian president agrees with [fighting terrorism combined with a political process], all the way down to holding early elections, let's say, parliamentary ones, establishing contacts with the so-called healthy opposition, bringing them into governing.”

Although Putin is preoccupied with Ukraine, he is not neglecting the Middle East. Russia is engaged in simultaneous moves to change the balance of power in favor of Damascus and provide it with a strong bargaining position at the negotiating table, to safeguard Moscow's interests and, more importantly, to amplify Moscow's military profile in the region.