One migrant’s encounter with death

As people in Libya try to make their way out of the country, mainly through illegal means, they are realizing the danger involved in the smuggling operations. 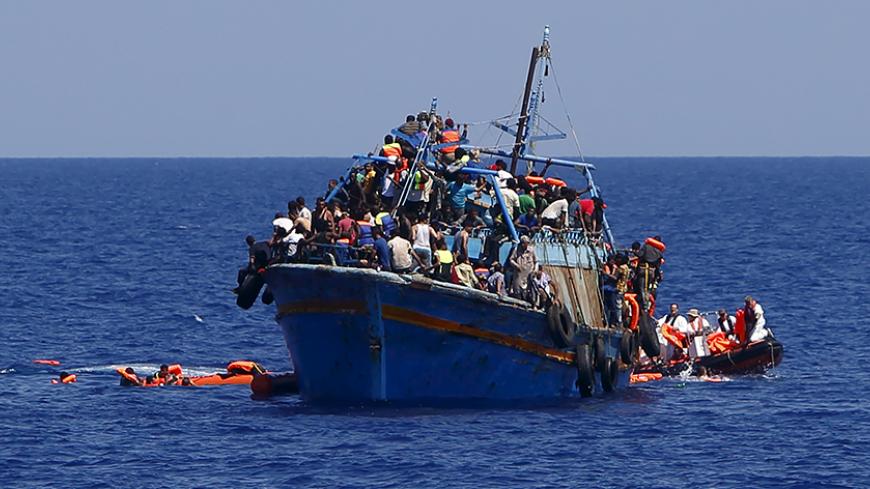 Migrants hang on to flotation tubes in the sea after jumping from an overloaded wooden boat during a rescue operation 10.5 miles off the coast of Libya, Aug. 6, 2015. - REUTERS/Darrin Zammit Lupi

A Moroccan man who tried and failed twice to board a smuggler's ship in Libya considers himself lucky he missed the boat.

“I could have been among the dead, but luckily … the boat was full already,” he told Al-Monitor.

Ibrahim, who did not want to disclose his full name fearing reprisals, lives in Tripoli with his wife, father, mother and younger brother. He makes a decent salary as an artistic director at a local radio station. A couple of weeks before Ibrahim spoke with Al-Monitor, his younger brother had convinced nearly the entire family to make the dangerous trip to Italy. The father, in his late 60s, did not like the idea and refused to go.

Through a Palestinian neighbor, who had spent time in jail, they made the connection with smugglers based in the coastal city of Zuwara, where most smuggling operations over the Mediterranean originate.

Early Aug. 21, Ibrahim and his family, except for his father, left their home. “We were received by two young Libyans active in the smuggling business,” Ibrahim said. The smugglers explained to them that each family member would pay 1,650 Libyan dinars (about $1,200), which included the cost of a life jacket and rent for an apartment for a couple of days. Once settled in the makeshift apartment in Zuwara, they were instructed to wait until the evening.

Around 10 p.m. they were taken in a four-wheel-drive Toyota to a location 15 minutes farther west of Zuwara, where they were to board the boats, or so they thought. The waiting area was one used by smugglers to keep would-be migrants in check. Once Ibrahim and his family were in the “collection area,” as the smugglers called it, another man came and collected the total amount of 6,600 Libyan dinars and disappeared.

At this stage, another group of men took over the operation. Ibrahim had never seen any of the four men before. The “collection area” was no more than a three-room old house with a dirty toilet in the back, while a high wall surrounded the outside. A floodlight revealed that nearly 1,700 more people were waiting, Ibrahim estimated. At the gate, several men appeared to be guarding the place. Among the potential immigrants, Ibrahim recognized some Moroccans, Pakistanis, Syrians, Bangladeshis, Sudanese and even Libyans. Some people were new to Libya while others had been living in different cities, including Benghazi in the east of the country. The place did not seem close to the shore. “We could neither smell nor hear the sea,” Ibrahim told Al-Monitor.

A little after midnight, they were divided into groups based on nationalities, and then each group was further divided into single people and families. They were driven in these groups to the shore. Ibrahim estimated it must have taken some 10 minutes by car to reach the sea, where they found another group of immigrants waiting.

By 2 a.m., small groups began the boarding process, chanting Allahu Akbar (God is great). A small rubber boat would deliver them to a larger fishing boat waiting some 400 meters (437 yards) into the sea.

To prevent damage to the rubber boat, the smugglers kept it away from the shore, and people had to wade into the sea to reach it. Ibrahim and his family were in water up to their waists, waiting for the rubber boat to unload its group of people and come back for them. After about 15 minutes one of the smugglers announced that the fishing boat was already full. Everyone else would have to come back another time.

About two hours later they were back in the apartment, where they spent another two days waiting. During that time, Ibrahim’s father joined them under pressure from his wife, who kept phoning him back in Tripoli. His father, reluctant to come until the very end, kept praying for “God to make this trip impossible,” Ibrahim recalled.

When it was time on Aug. 22, they rode in the same car, but this time to another location, very close to the sea. It was completely dark. About 600 would-be immigrants were waiting. Ibrahim said the crowd included some who did not make it in the previous attempt as well as some newcomers.

They were herded toward the water. “Unmarried men first, followed by families without kids, and then families with children, as those are always kept on the upper deck of the fishing boat,” Ibrahim said. Again, as instructed by the smugglers, they chanted Allahu Akbar.

But again, the ship was full and they were driven back to their makeshift apartment in Zuwara, where they spent another couple of days. While waiting there, Ibrahim said he received a phone call from one of the smugglers, who asked if Ibrahim remembered giving his life jacket to a Sudanese man the previous night. “When I answered him yes, the smuggler said, ‘Your life jacket saved him, as the boat he was in capsized and sank, killing nearly 300 people while the coast guard rescued about 160.’”

It was this phone call that made Ibrahim change his mind and decide not to take the risk again. He called his employer in Tripoli asking for his help to return, as “We could not just leave since the smugglers would not allow us, and it took some four hours to arrange our safe return to our home.” Al-Monitor asked Ibrahim if he will try again. He said, “Only a crazy person would try again. For me, that is it.”