US, Turkey diverge on role of Kurds in Syria 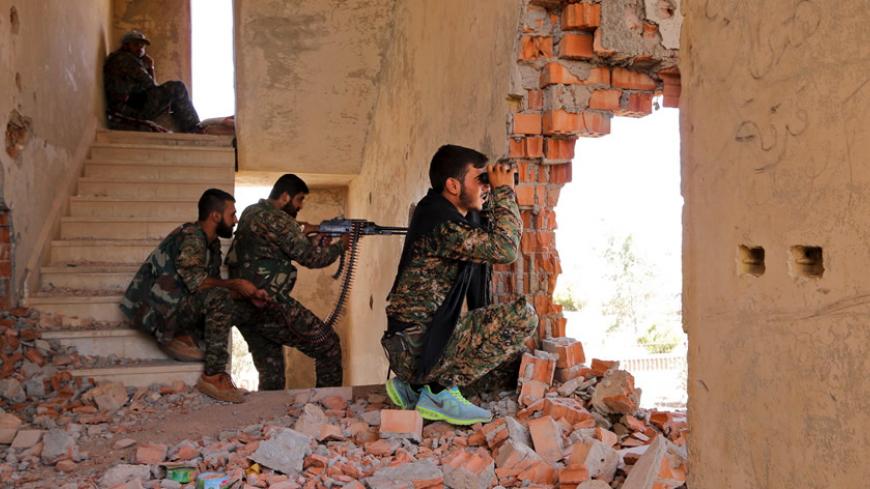 Kurdish People's Protection Units fighters take up positions inside a damaged building in al-Vilat al-Homor neighborhood in Hasakah city, Syria as they monitor the movements of Islamic State fighters who are stationed in the city's Ghwayran neighborhood, July 22, 2015. - REUTERS/Rodi Said

A Syrian Kurdish militia that has been effective in combating the Islamic State (IS) claimed Aug. 1 that the Turkish military is targeting its forces in Syria.

The Turkish decision July 24 to take military action against IS and to allow US use of the Incirlik Air Base, which was announced with great fanfare, coincided with a massive Turkish air campaign against Kurdistan Workers Party (PKK) bases in the Kurdistan Region of Iraq.

Turkish targeting of the Syrian Kurdish People’s Protection Units (YPG) would be both unsurprising and complicating for US policy, especially as the United States has now given in to a long-standing Turkish demand for a “safe zone” in northern Syria.

Semih Idiz reported on July 1 that Turkish military leaders were wary of preparations for a Syrian buffer zone and that, if it happened, the preoccupation of the ruling Justice and Development Party (AKP) in such an operation would be the Syrian Kurds, not IS.

This week Idiz writes that “the disproportionate manner in which” Turkey is conducting its military operations against the PKK “compared with the campaign against IS has raised questions about the AKP’s motives. Many argue that the government, egged on by President Recep Tayyip Erdogan, is trying to shore up its base of support by using the anti-Kurdish sentiments of nationalist Turks with a view toward regaining its pre-eminent political position in early elections, which could be held in November.

“According to this argument, the AKP, to curry favor with the nationalists, wants to end the peace process it initiated in 2012 with the PKK through the mediation of members of the pro-Kurdish Peoples’ Democratic Party (HDP), which got 13% of the vote in the June 7 elections. The AKP’s coalition negotiations are ongoing, but there are indications that the party is under pressure from Erdogan, its 'spiritual leader,' to prepare for early elections instead of working to form a government with another party.”

He adds, “Ankara claims the PYD [Kurdish Democratic Union Party] and its militia are extensions of the PKK and has listed them as terrorist organizations. Washington has not done the same. Ankara is concerned that the Syrian Kurds will establish an autonomous region along Turkey’s border and encourage Kurdish separatism among PKK supporters in Turkey. Ultranationalist politicians want Turkey to hit the PYD and YPG, along with the strikes against the PKK and IS, but the Davutoglu government clearly understands that this would be crossing a red line.”

The US rationale in agreeing to Turkish demands for a safe zone may be that the benefit of both Turkish engagement and use of Incirlik Air Base outweigh the risk of getting drawn further into Syria at the Turkish point of the spear. Turkey is in Syria to depose Syrian President Bashar al-Assad and thwart Syrian Kurdish ambitions. IS is third on the priority list, a late wake-up call for Turkey to, finally, address the IS threat on its border following the terrorist bombing in Suruc on July 20.

While the United States, like Turkey, has labeled the PKK a terrorist group, Washington, unlike Ankara, considers Syrian Kurdish forces as reliable and effective allies against IS in Syria. US Secretary of Defense Ashton Carter praised Syrian Kurdish forces July 6 when he spoke to reporters about “the effective action on the ground of Kurdish forces, which gives us the opportunity to support them tactically. And that's what we were doing over the weekend north of Raqqa, which is conducting airstrikes that limit [IS'] freedom of movement and ability to counter those capable Kurdish forces. And as it's very important, that's the manner in which effective and lasting defeat of [IS] will occur, when there are effective local forces on the ground that we can support and enable so that they can take territory, hold territory and make sure that good governance comes in behind it. So we are looking for those opportunities and trying to create those opportunities in Syria. … but it's the success on the ground of the Kurds that explains the uptick over the last few days.”

The Turkish attacks on PKK bases in northern Iraq put pressure on Massoud Barzani, president of the Kurdistan Region of Iraq, who issued a statement Aug. 1 condemning the attacks on the PKK that killed civilians, appealing to the PKK to take the fighting out of civilian areas and calling on Turkey and the PKK to resume peace talks.

It is worth recalling that on May 6, Carter testified before a Senate panel that a no-fly zone in Syria would be “a difficult thing to contemplate” and that the enforcement of safe zones would entail “a major combat mission.” It appears the United States has undertaken this “major combat mission” to win Turkish backing for the battle against IS. US leaders must be aware that the consequences of this intervention are now linked to Turkey’s ambitions in Syria, which are not a perfect match for the United States.

US Secretary of State John Kerry arrived in Cairo on Aug. 2 for consultations on security and human rights, as Egypt faces an increase in terrorist attacks linked to IS.

H.A. Hellyer wrote last month that a July 11 terrorist bombing of the Italian Consulate in Cairo “indicates that there is the will and capacity [for these terrorist groups] to carry out such operations. The general trend — as shown by the attacks in the Sinai Peninsula earlier this month [July] and the killing of the public prosecutor, Hisham Barakat, June 30 — would further imply that more attacks, and worse ones, are to come.”

Hellyer explained the dilemma for Western countries, including the United States, in dealing with Egypt’s trend toward authoritarianism: “The current political dispensation in Egypt is not seen as a liability. On the contrary, there is a sense that there is no viable alternative to deal with at the present time given the state of other political groupings and the support base that exists for the current administration among the wider population. That leaves Western capitals attempting to bilaterally advise Cairo to re-strategize, including releasing nonviolent opposition from jail, refocusing on fundamental rights and engaging with more effective counterinsurgency techniques in Sinai. Bilateral efforts as of yet have been ineffective. But there appears to be little will for multilateral activity among Western allies, and certainly not in conjunction with Cairo’s supporters in the Gulf, including Saudi Arabia and the United Arab Emirates.”

Mohamed Saied reports this week from Cairo on the alarm among journalists about a new draft anti-terrorism law that, among other things, would bring back prison penalties for journalists, which are forbidden by the Egyptian Constitution. Amid the uproar over the proposed media restrictions, Rami Galal reports on a public relations campaign by the Ministry of Interior and Egypt’s police that purports to show how the police are siding with the poor and disadvantaged. The campaign is considered by some critics as politically motivated.