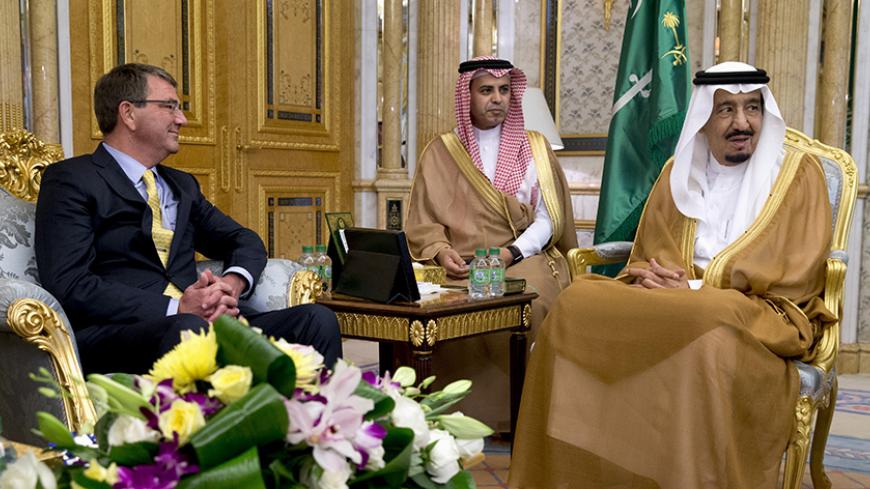 The new Saudi king will use his first official visit to the White House this week to make clear that his country’s lukewarm support for the nuclear deal with Iran comes with strings attached.

King Salman bin Abdul-Aziz Al Saud’s three-day visit, strategically scheduled just days before Congress votes on the agreement, offers the Saudi leader a powerful platform to insist that the United States help combat Iranian “mischief.” The king is seeking assurances in the fight against Iran’s proxies across the region, as well as with elements of the nuclear deal itself.

The visit “underscores the importance of the strategic partnership between the United States and Saudi Arabia,” White House spokesman Josh Earnest said Aug. 27.

“The president and the king will discuss a range of issues and focus on ways to further strengthen the bilateral relationship, including our joint security and counterterrorism efforts,” Earnest said. “They will also discuss regional topics, including the conflicts in Yemen and Syria, and steps to counter Iran’s destabilizing activities in the region.”

Despite deep reservations about the deal, sources close to the Saudi government say that unlike Israel, the kingdom quickly concluded that it could not be defeated in Congress and that no better alternatives were likely to emerge.

Riyadh, however, has repeatedly made clear that its support is conditioned on a tough inspection regime and snapback sanctions. Salman may seek further assurances on those aspects of the deal in light of recent reports that allege that Iran will be allowed an unusual amount of autonomy with regard to inspections of its military installation at Parchin.

“The agreement must include a specific, strict and sustainable inspection regime of all Iranian sites, including military sites, as well as a mechanism to swiftly re-impose effective sanctions in the event that Iran violates the agreement,” the Saudi Embassy in Washington said after the deal was announced.

Most of the discussion is expected to center on non-nuclear issues, however.

Salman and President Barack Obama, who will meet Sept. 4 at the White House, are expected to further flesh out Washington’s promise of increased military support for the Gulf Cooperation Council countries — including a potential missile defense shield — as discussed during the US-GCC Camp David summit in May. That meeting, which was skipped by four of the top six regional leaders — including Salman — aimed to reassure the Gulf nations of America’s commitment to their security amid the perceived rapprochement with Iran.

“This is an opportunity to reset this relationship when there are some pretty considerable concerns on both sides,” said David Weinberg, a Gulf analyst with the Foundation for Defense of Democracies. “It comes in the context of the United States trying to reassure the Gulf states about the Iran deal, as well as to focus on this Camp David agenda in terms of concrete US security assistance. It’s reasonable to assume that that’s going to be a big focus of the trip as well.”

Much of the conversation is expected to focus on military hardware: The Saudis are seeking upgrades to their F-15s along with other advanced weaponry, but Israel is said to have raised concerns during Defense Secretary Ashton Carter’s recent visit to the region. Congress may object to such sales if lawmakers deem that they would undermine Israel’s so-called qualitative military edge.

The Saudis will be interested “in how much the White House will invest itself so that it can get the technology that it wants,” former Obama National Security Council Middle East adviser Prem Kumar told Al-Monitor. They will want to see if the White House “will spend some political capital on the Hill.”

Another topic of interest is the proposed creation of a GCC-wide “rapid reaction force” to take on external threats. The White House paid lip service to the idea in its joint statement from the Camp David summit, but the idea has failed to gain traction among concerns by Qatar and Oman that it would be dominated by the Saudis.

“In terms of GCC-wide reassurance, the Saudis are interested to hear what the US is prepared to do to support the GCC rapid reaction force, the joint Arab defense force, if that is going to materialize,” Kumar said.

Beyond military requests, Salman is likely to seek US backing for his more muscular approach to foreign policy compared with his predecessor. That includes beefed-up US support for his campaign against the Houthis in Yemen and a renewed focus on getting rid of President Bashar al-Assad in Syria.

“The Saudis at this point have kind of parted ways with their traditional behind-the-scenes diplomacy and trying to mediate between warring factions,” Nazer said. “[They’ve realized] it’s time for them to take the helm of ensuring their own interests.”

In Yemen, “The Saudis want the US to get more involved, beyond intelligence and logistical support to the Saudi-led coalition,” said Kumar, now vice president with the Albright Stonebridge Group. Already, the Pentagon in recent weeks has more than doubled its advisers on the ground providing targeting intelligence for airstrikes and helping the Saudis roll back the Houthis, according to the Los Angeles Times.

Those battlefield successes have led some Saudi cheerleaders to argue that the intervention in Yemen offers a “template” for similarly emboldened leadership in Syria. While Nazer and others doubt Riyadh will go that far, the Saudis have recently announced their own proposal to withdraw support for Sunni rebels if Iran removes its forces and Hezbollah fighters with a view to parliamentary and presidential elections under UN supervision.

“I think there are a couple concrete things” on the Saudi wish list, Kumar said. “First is to increase support for the Syrian opposition, in some form or other. Safe zones, maybe direct pressure on the [Assad] regime, that would not necessarily undercut diplomatic initiatives.”

The king’s visit isn’t just about politics, however. He will be accompanied by a large entourage of ministers and business executives, and some of them are expected to stay on after the royal visit.

The US-Saudi Arabian Business Council has announced a daylong investment forum with the ministers of finance as well as commerce and industry.