Why did it take Saudi Arabia 20 years to catch Khobar Towers bomber?

Reports have emerged that Saudi Arabia is holding Ahmed Ibrahim al-Mughassil, a Saudi Shiite who masterminded the 1996 attack on US military housing in Khobar that left 19 servicemen dead. 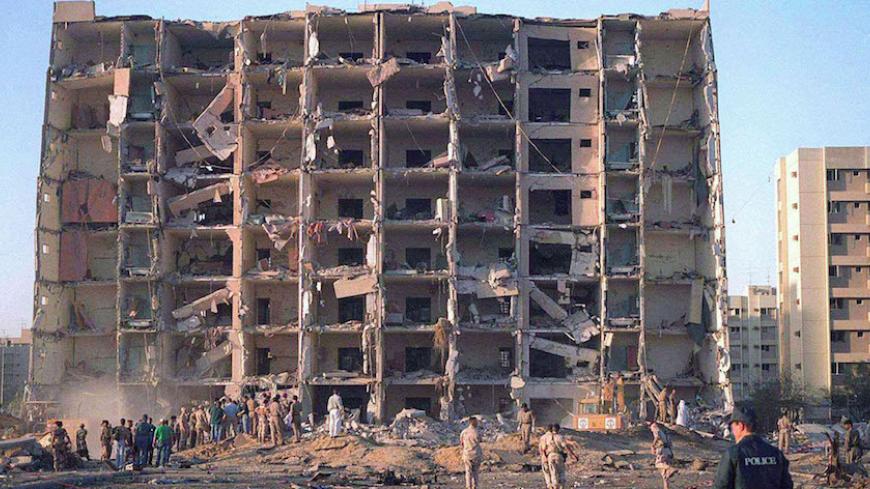 The Khobar Towers military complex in Saudi Arabia after the June 1996 bombing that killed 19 US servicemen. - REUTERS/Dept.

After a 20-year manhunt, the Saudis have captured the man behind a deadly 1996 terrorist attack on American airmen in the kingdom. The case will raise questions about Supreme Leader Ayatollah Ali Khamenei's role in the murder of 19 US service members.

Ahmed Ibrahim al-Mughassil is a Saudi Shiite who masterminded the June 25, 1996, attack on an American military barracks in Khobar, Saudi Arabia. According to Saudi and Pakistani press accounts, Mughassil was found in Beirut and has been transferred to the kingdom. Nineteen US Air Force personnel were killed at Khobar and 372 were wounded in the attack. The FBI put a $5 million bounty for information leading to his arrest years ago.

The press accounts do not provide details on when and how the Saudis apprehended Mughassil, and the Saudi government has provided no comment or confirmation as yet. Some Lebanese accounts say Mughassil was caught just two weeks ago in Beirut. Saudi authorities have been unwilling to comment publicly on the Khobar attack since it occurred in 1996, but they privately have long pointed to Mughassil and his Iranian handlers as the perpetrators.

In the 1990s, Mughassil operated from the Sayyida Zeinab mosque in Damascus, Syria. A Shiite pilgrimage site, the mosque was and still is a stronghold of the Iranian presence in Syria. Beginning in 1994, Mughassil began surveilling the Khobar Towers facility and the Dhahran air base nearby. It was then the main US Air Force base for no-fly zone operations over Iraq. According to a 2001 Department of Justice indictment, Mughassil made periodic visits to Dhahran to oversee the surveillance and recruit local Saudi Shiites for the attack. The Iranians instructed him to identify US facilities in the kingdom, according to the indictment.

As deputy assistant secretary of defense at the time, I arrived at the Khobar bomb site a few hours after the attack. The scene was devastating. Mughassil had driven a truck containing the bomb up to a protective wall near the barracks. He then remotely detonated the bomb. It was the equivalent of 20,000 pounds of TNT, larger than the bomb used to blow up the Marine barracks in Beirut. In addition to the Americans killed and wounded, dozens of Saudis and South Asian guest workers were injured. Mughassil allegedly fled to Iran immediately after the attack.

In my meetings with senior Saudi officials in Dhahran in the days immediately after the attack, they pointed the blame at Saudi Hezbollah. It became clear the Saudis had a great deal of information on the group and had probably foiled an earlier bomb attack without telling Washington. The Saudis were certain it was not the work of Osama bin Laden. They knew Mughassil was the mastermind from the start.

Throughout the investigation of the plot, the Saudis were worried Washington would use the incident to attack Iran. Then-Crown Prince Abdullah bin Abdul-Aziz Al Saud, who was the de facto regent with King Fahd incapacitated by a stroke, did not want to start another Gulf war and face Iranian retaliation against the kingdom. Interior Minister Prince Nayef bin Abdul-Aziz Al Saud was even more determined not to cooperate with the American investigation. It would expose weaknesses in Saudi security and his ministry.

President Bill Clinton chose a different means of retaliation. IRGC and Iranian intelligence officers serving around the world under cover were "outed" by American intelligence. Clinton's counterterrorism adviser Richard Clarke later wrote that the outing operation probably convinced Iran not to target American facilities for the rest of the 1990s.

In June 1999, the Clinton administration informed Tehran that it had credible information that the IRGC and Lebanese Hezbollah were involved in the attack. The sultan of Oman delivered the message to the Iranians at Clinton's request. The Iranians denied any involvement. They also promised no further attacks would occur.

The 2001 Department of Justice indictment indicates the bomb was built by a member of Lebanese Hezbollah. The indictment also says Mughassil was in close contact with Iranian officials throughout the planning and execution of the attack. The officials were not indicted nor named.

In 2006, a federal court awarded $254 million in damages to the families of some of the airmen killed in Khobar. The court ruled Iran had been responsible for the attack, that the bomb was built in an IRGC camp in Lebanon and that Khamenei had approved the operation.

Mughassil was the senior Saudi Hezbollah official interacting with the Iranians. He would know exactly who was involved in the plot in Tehran. If he cooperated (a huge and unlikely if) he could establish the chain of command. In the more likely case that Mughassil's interrogation is selectively leaked to the media, it could still pose embarrassing and dangerous questions about Khamenei's role.

The news of Mughassil's apprehension will also raise questions about how the 20-year-old manhunt broke now. The timing is certain to strike many as suspicious. Is the news intended to remind Americans about Iran's long history of involvement in terrorism just as the congressional debate on the Iran nuclear deal reaches its peak? The Saudis are very concerned that the deal will end Iran's isolation and strengthen its capacity for regional mischief. Riyadh has been fairly quiet about its concerns, but it is deeply engaged in a proxy war with Iran in Yemen. Even if the timing of Mughassil's arrest is a coincidence, the decision to leak the news is probably intended to influence the debate.

Saudi sources also say King Salman bin Abdul-Aziz Al Saud will visit Washington early next month. Mughassil's arrest is certain to be a major issue for the visit and prompt questions about US access to his interrogation in the kingdom and possible extradition to the United States. The king's visit may be the denouement of the Iran debate.