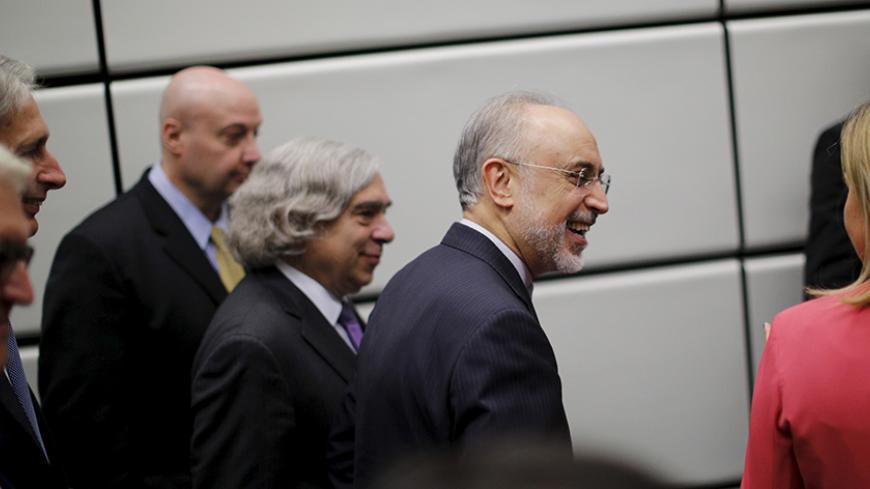 One of the most popular American negotiators in Iranian social media was US Energy Secretary Ernest Moniz. The Massachusetts Institute of Technology (MIT) professor emeritus and former director of the MIT Laboratory for Energy and the Environment joined the nuclear talks between Iran and five permanent members of the UN Security Council plus Germany (P5+1) to discuss the technical aspects of the nuclear deal with the head of Iran’s Atomic Energy Organization, Ali Akbar Salehi.

In an interview with an Iranian newspaper, Salehi spoke about the negotiations and his relationship with Moniz. Just as Moniz was picked to lead the technical negotiations due to his nuclear expertise, Salehi, an MIT graduate, is one of the few individuals to have held important positions for three consecutive administrations — a sign that he has the trust of Supreme Leader Ayatollah Ali Khamenei.

Salehi first denied accusations that former hard-line nuclear negotiator Saeed Jalili was not a serious negotiator. Salehi was Iran’s foreign minister at the time and said that when he was at the meetings with the Supreme National Security Council, Jalili’s negotiating positions were in line with the country’s positions and that “he did not go rogue.”

According to Salehi, the reason for the deadlock during that time was the differences among the P5+1. Specifically, the EU3 (France, United Kingdom and Germany) saw their positions and interests separate from the E3 (US, Russia and China). He said that even when European Union Chief Catherine Ashton reached a point of agreement with Iran on one issue, one country would oppose it and throw everything off. This is why Iran agreed to bilateral talks with the United States in Oman.

Salehi said that he was asked to join the nuclear talks when the discussions on the Natanz enrichment facility reached a dead end. Salehi said he would only join the talks if Moniz, his American counterpart, did as well. According to Salehi, this was approved by Undersecretary Wendy Sherman and Deputy Foreign Minister Abbas Araghchi, which he described as “the communications link between America and Iran.”

Salehi said he and Moniz did not know each other well when they were at MIT, but when they first met during the talks, “there was a feeling that he has known me for years.” Salehi added, “A number of my classmates are now Mr. Moniz’s experts.”

According to Salehi, Moniz entering the talks was important because Salehi expressed that he had been sent with “full authority” to sign off on all technical issues in the nuclear negotiations and Moniz had told him that he had the same authority. He added, “If the negotiations did not take place with the Americans, the reality is that it would not have reached a conclusion. No [other] country was ready to sit with us and negotiate for 16 days with their foreign minister and all of its experts.”

Salehi said that one of the more difficult times negotiating with Moniz was after they reached an agreement on a particular issue. Moniz would take it to the other members of P5+1, who would then make their own requests.

It was also reported that Moniz had given Salehi a gift for the birth of his granddaughter — clothes and a toy embossed with MIT logos. Salehi said that he had also brought gifts for Moniz — Iranian honey and trail mix of Iranian nuts.