Turkey’s decision to open two fronts, against the Islamic State and the PKK, complicates US cooperation with Kurds in Syria. 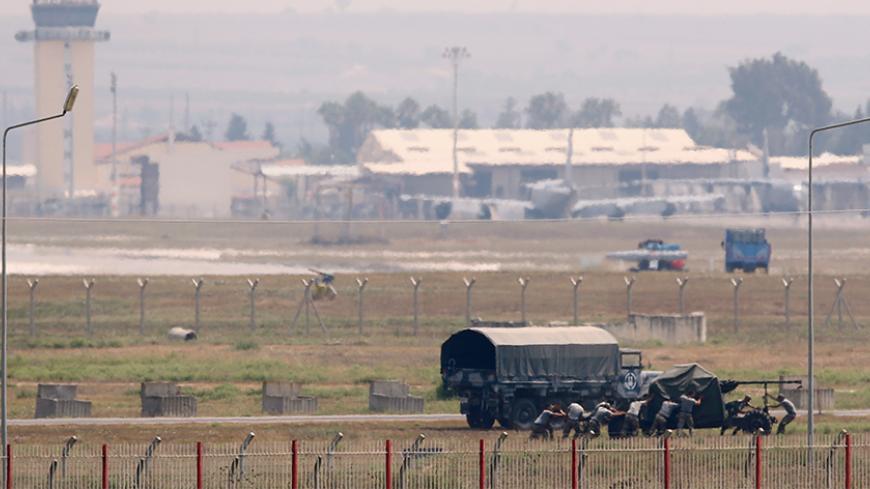 Turkish soldiers position an anti-aircraft gun at Incirlik Air Base in the southern city of Adana, Turkey, July 27, 2015. - REUTERS/Murad Sezer

On July 23, Turkish air force F-16s attacked Islamic State (IS) targets in northern Syria in response to a July 20 suicide bombing in Suruc and an IS attack on an army border patrol that killed one soldier. These events were followed on July 24 by the first Turkish aerial bombing since 2011 of Kurdistan Workers Party (PKK) targets, in northern Iraq.

The attack on IS was a single sortie against limited targets and closer to the Turkish border, while the one against the PKK was much different. The air force dispatched 75 F-16s and F-4E 2020s in three waves during July 24-26. Some 300 smart bombs were dropped in 185 sorties against approximately 400 PKK targets.

After the bombing runs, a foreign friend contacted me. “Turkey is bombing the PKK in northern Iraq. In northern Syria, Turkey is bombing IS in a way that will at the end of the day benefit the PYD [Democratic Union Party] and therefore the PKK. What is going on?” he asked. It is, indeed, a pertinent question.

There have been head-spinning developments in Turkey over the last 15 days. A US delegation led by retired Gen. John Allen, President Barack Obama’s envoy for dealing with IS, held critical talks in Ankara on July 7-8. The discussions concluded with what US officials called a “game changer” — a joint action plan involving Turkey, the United States and the US-led coalition against IS. The core of the plan calls for Turkey to become an active partner in the anti-IS coalition of about 60 countries. This shift was underlined in a July 24 statement by the Turkish Foreign Ministry that said Turkish planes would henceforth actively participate in aerial attacks against IS.

From the official statements emanating from Turkey, it was clear that Turkish leaders had decided to shift from a low-profile, anti-IS approach to one based on active use of military power. Another indicator of the Turkish shift from passive to active was the recent wave of arrests detaining some 600 IS militants.

While strategic negotiations between Turkey and the United States proceed on how to implement their new accord, the decision to create an IS-free zone in northern Syria is a done deal. It will cover an area 100 kilometers wide and 40 kilometers deep, from Marea to Jarablus. Calling it an “IS-free zone” sends the world a message about its main purpose. This should also help alleviate the concerns of Russia, Iran and the Syrian regime of Bashar al-Assad. Security sources in Ankara emphasize that talks are ongoing on the status of the Kurdish PYD under the new plan and the nature of potential Turkish army actions inside Syria.

As for stepped up clashes between the PKK and Turkish security forces inside Turkey, the outlook is bleak. Since the Suruc bombing, there have been wide-scale street demonstrations, militant roadblocks and torching of vehicles, especially in Istanbul and the eastern provinces, where Kurds mostly live. Five Turkish security personnel and four civilians were killed during July 23-26. Ankara officials issued a list of violent actions committed by the PKK this year and accused the group of “poisoning the solution process with the armed violence they continued after the June 7 elections.”

A statement by the PKK press office asserted, “After the bombing of PKK units in northern Iraq by Turkish planes, the cease-fire has no more meaning.” In other words, the solution process has been admitted to the intensive care unit, according to the Turkish government, because of the continuing armed violence by the PKK or according to the PKK because of the latest aerial bombings.

The Turkish government for a year and a half had maintained a low profile against IS — some contended this stance was based on political calculations, while others said it involved high risks. The government has now made a high-speed U-turn because of US efforts and the Suruc bombing. Now, Ankara has suddenly become the most passionate member of the anti-IS coalition. It was observed with interest that the still-operational Syrian air defense systems and the Assad regime, along with its allies Russia and Iran, did not react angrily to the Turkish bombing of IS targets.

According to the evolving strategic picture, the United States wants to create IS-free corridors in southern and northern Syria, and it needs Turkey's cooperation on the northern corridor. The goal of the strategy is to wedge IS between the two corridors, erode it initially with air attacks and then eliminate it with offensive ground operations by the Free Syrian Army, the PYD's militia and Assad’s forces, with close US air support.

Turkey knows how much the United States needs the Incirlik Air Base to establish and maintain the IS-free zone in the north. This is why Ankara cleverly put its attacks against IS in Syria and the PKK in Iraq into the same basket, which forced the US to accept both. By bombing the Kurds, Turkey hopes to recover the strategic superiority it has lost in regard to the PKK. Ankara also realized that to prevent the PYD's forces from crossing to the west of the Euphrates River, it has to be more active in the coalition. Hence it has dumped the PKK and IS into the same “terror organization basket.” Simultaneously roundup operations against the PKK’s urban structures and IS in Turkey is another manifestation of such thinking in Ankara.

Where the actors in the evolving drama stand is clear in certain strategic respects, but for them to achieve their immediate goals will require some difficult decisions and shifts.

Turkey wants to use its participation in the US-led coalition to maximum effect for its struggle against the PKK and to decrease PYD influence in northern Syria. For Turkish decision-makers, the PKK is still the priority in terms of threat. It is unclear whether Turkey’s decision to open two fronts, including one inside Turkey, against the PKK and IS is an instinctive decision or whether it is the conclusion of a strategic plan, with the targets carefully selected after a comprehensive risk analysis. Turkey's ability to steer these political and military processes will be determined by the answer to this question.

Meanwhile, armed violence has become an addiction for the PKK, the military arm of Kurdish politics. The PKK must admit that it is obsessed with such violence, and that it must abandon it, but it can’t do it. That is why it is vital that the Peoples' Democratic Party (HDP), the civilian wing of the Kurdish political movement, become a power in its own right and bring the armed wing under democratic, civilian control. The HDP, however, grossly lacks in capacity vis-a-vis the ruling Justice and Development Party and the PKK.

The United States faces a strategic dilemma: Should it continue its cooperation with the PYD against IS, which seems to be going well, or should it opt for closer cooperation with Turkey at the risk of curbing the effectiveness of the PYD and the PKK in the region? The decision taken in Washington will decide the outcome of this complicated process.

Of interest, IS has not officially claimed the Suruc bombing and has not reacted to Turkey’s bombing of its forces. No one knows how IS perceives the latest Turkish actions, but is known that IS wants to expand its front lines. It clearly sees, however, that the United States seeks to put it in a vise in Syria. It is therefore allowing more freedom of action among its local commands in Syria and Turkey.

Despite all possible analyses, when it comes to what is transpiring on the ground, it is not yet clear whose hands are in whose pockets, where alliance interests might change without notice and where interests and the quest for power could make a mockery of ideology.