A lack of progress in the peace talks, the absence of reconciliation and an aging president have once again forced discussion on the future of Palestinian leadership. 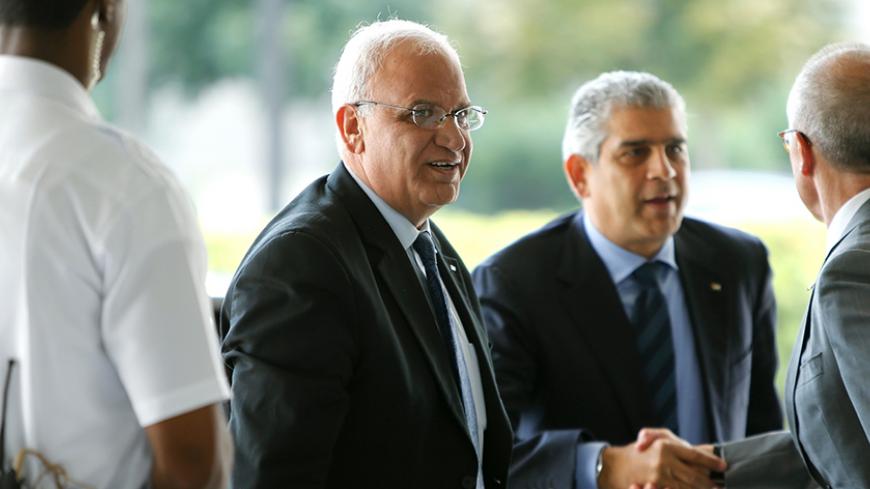 The June 30 decision by Palestinian President Mahmoud Abbas was swift, but the meaning and ramifications of it might be long lasting. The secretary-general of the Palestine Liberation Organization (PLO) executive committee, Yasser Abed Rabbo, was relieved of his role and later replaced by another executive committee member, Saeb Erekat, based on Abbas’ request. News organizations reported July 4 that chief PLO negotiator Erekat had been appointed by a presidential decree as acting secretary-general of the organization.

Earlier, on June 21, another decision by the Palestinian leadership to investigate former Palestinian Prime Minister Salam Fayyad, regarding funds he raised from the Gulf in support of needy Palestinians, raised eyebrows.

On June 21, his bank accounts were frozen on unproven accusations of money laundering. No one has been able to explain the reasons behind both these decisions, except to point to the possibility of extreme worry by Abbas and his entourage of an effort to replace him.

These two decisions, along with the general international community’s lack of interest in resolving the Palestine issue, have brought to the forefront the need for a serious discussion about the topic of Palestinian succession. Abbas is 80, yet no vice president has been named nor has any single Palestinian leader been groomed to possibly replace him.

Abbas was elected in January 2005 and was expected to serve a four-year term ending Jan. 9, 2009, but the 2006 elections of a pro-Hamas legislature complicated matters. The takeover by Hamas gunmen of the Gaza Strip in June 2007 made the possibility of nationwide elections all but impossible. The 74 (out 132) Islamist members of the Palestinian Legislative Council (PLC) elected Abdel Aziz Dweik as council speaker. The Palestinian basic law, a quasi constitution, stipulates that when a presidential position is vacated, the speaker of the council will become president for a 60-day period during which elections for a new president can take place.

The fact that the council has not been in session for years — partially as a result of Israel's detention of many of its members, including the speaker — has further complicated the situation. While Dweik was released June 9, at least 12 Palestinian parliamentarians are still jailed by Israel on the grounds of supporting Hamas, which is deemed a terrorist organization in Israel.

Legislative and parliamentary elections have been regularly discussed and agreed to in various Fatah and Hamas reconciliation agreements, but there has been a lack of will by one or both major groups to bring about elections. The 132 members of the PLC are automatic members of the Palestinian National Council.

Abbas and his Fatah colleagues also refuse to accept the current speaker’s role as the possible interim president in case of the death or resignation of the current head of state. According to the PLC bylaws, the speaker is normally elected at the beginning of every regular session of the council and therefore, it is not a permanent position similar to that of a president elected by the public at large. Since Palestine became a UN-recognized nonmember state in November 2012, an argument has been made by Abbas defenders that the secretary-general of the PLO’s executive committee can become interim president until elections take place.

Some commentators have suggested creating the position of a vice president, but the basic law does not refer to it and Abbas would face major problems if he chooses a vice president among the many contenders. The younger Palestinian generation of leaders who were denied top positions by Yasser Arafat and Abbas are expected to replace the president.

The elephant in the room, of course, is the Islamic movement, Hamas, which controls the Gaza Strip and has influence outside of Gaza. The recent impressive victory of the pro-Hamas student council in April 2015 at the West Bank’s Birzeit University further complicates the situation for Abbas and his Fatah movement. The Lebanese daily Al-Akhbar conducted an interview with Hamas strategist Ahmed Yousef in November in which he was quoted as supporting the possible candidacy of Fayyad to the position of president. This set off waves of worry among Fatah activists.

On paper and in signed agreements, Hamas supports a reconstituted PLO as an overall umbrella for Palestinians everywhere; in reality, however, no hard decision has been made by its leadership to join it. The PLO’s Central Council convened in Ramallah as recently as March with no Hamas members in attendance.

Succession discussions were the main feature of an article written by analyst Hani Masri, who heads the Masarat think tank in Ramallah. In his column in As-Safir on July 7 — republished in numerous Palestinian publications — Masri makes a strong argument that Fatah, and even the PLO, can no longer speak as representatives of the majority of Palestinians. And without a named vice president, Masri notes that the situation can either be calmly resolved through existing legal organizations or possibly burst into chaos that can envelop the entire Palestinian community. In conclusion, Masri calls for an internal Palestinian discussion to agree on some basic mechanisms that can avoid further chaos in Palestine.

That the presidential succession has returned as a strong issue is a sign of uncertainty about the future among Palestinians. Without a clear executable agreement that includes parliamentary and presidential elections with Hamas and some kind of understanding within the ruling Fatah movement, the writing on the wall is very worrisome. The recent success of nonviolent activities by Palestinians abroad, such as the boycott, divestment and sanctions activities, might lead some to argue that the time is right to give up on the limited powers of presidency under occupation and return to the days where the real power is in the hands of the PLO leadership outside the occupied territories.