Hamas has launched a new website in English in the hope of bolstering its communication with the West. 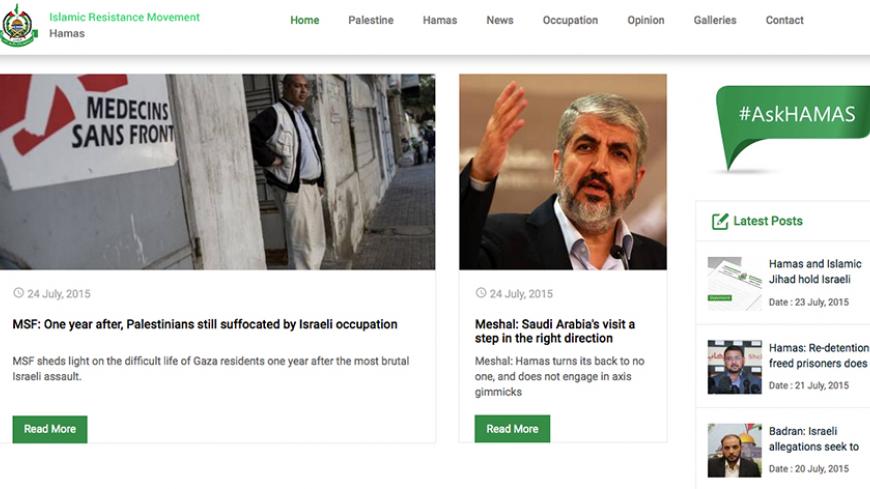 Hamas continues its attempts to break the political siege imposed on it since it won the 2006 legislative elections by meeting with Western officials. The latest of such meetings was held in Qatar on June 5, between the head of Hamas’ political bureau, Khaled Meshaal, and the former envoy of the Quartet, Tony Blair. They discussed the future of the truce between Hamas and Israel, and the fate of the Israeli soldiers who have been held captive by the movement since the Gaza war in the summer of 2014.

On June 25, Hamas launched its official website in English. The day before, Hamas announced in a press statement that the English-language website is part of the movement’s efforts to promote communication with the West.

Hamas’ English-language website allows Western Internet users to learn about its positions and news. The website also includes a forum that answers the questions posed by Westerners, and an archive.

There are several websites that are affiliated with Hamas, such as the Palestinian Information Center, which is available in Arabic, English, Persian, French, Turkish, Urdu and Russian. However, Hamas’ new website talks in the movement’s name, publishes its positions and clarifies its opinions. Western Internet users and decision-makers can browse the website to learn about Hamas’ official view on the Palestinian, regional and international events.

Since its inception in 1987, Hamas has been complaining that Western decision-makers and research and media outlets only hear about the movement, not from it, which is why the new English-language website was launched.

Member of Hamas’ political bureau Sami Khater told Al-Monitor his regret that “most Western countries do not deal with Hamas based on [the movement’s] rational and realistic positions and policies despite the serious talks between Hamas and European countries. These countries view Hamas based on their commitment to supporting Israel, which considers any resistance against it as terrorism. This is why Hamas is subjected to a systematic plan to distort [its image] by Israel and its supporters in the West.”

In the past few years, Hamas has shown growing interest in communicating with the West, especially since the Arab Spring and the rise of Islamists in the region. These circumstances have pushed Hamas to expand and develop its international relations, considering that an official Western recognition of the movement is imminent.

Hamas’ efforts to open communication channels with the West became apparent when Hamas leaders started publishing reports in the Western media. Most prominent among these reports was the one by Ismail Haniyeh, former political adviser to deputy chairman of Hamas' political bureau, in The Guardian on June 8, 2012.

In March 2015, Hamas also launched a Twitter campaign called Ask Hamas, which was addressed to the Western reader. For three consecutive days, a number of the movement’s leaders answered hundreds of questions in English.

On June 30, Ahmad Atwan, member of Hamas’ Legislative Council, participated, in an unprecedented move, over Skype in the British parliament session about the Jerusalem situation.

Egyptian paper Shorouk revealed in April 2014 that the number of members at Hamas’ foreign relations bureau reached 70, each of whom is responsible for a file of one country in the world, mainly in the West. These members constitute the pioneers of Hamas’ diplomatic wing.

Al-Zaytouna Center for Studies and Consultations in Beirut published in July a new book titled “Islamic Resistance Movement-Hamas: Studies of Thought and Experience.” The 672-page book includes 11 studies, which some Hamas leaders contributed to. The book focuses on Hamas’ political rhetoric addressed to the West.

Youssef Abu al-Saud, a Palestinian researcher concerned with the ties between Hamas and the West, told Al-Monitor, “By reading most Western publications about Hamas, I noticed that Hamas is depicted as an armed military organization, as [these publications] do not tackle the political and social aspects of the movement. This poses a challenge to Hamas’ communications [efforts] with the West, which is further challenged with the lack of direct information about the movement. The West views Hamas based on regional and international reactions, while considering it part of the political Islamic [movement] in the region. The West disregards [Hamas] being a national liberation movement against the Israeli occupation.”

Saud added, “One of Hamas’ main problems in communicating with the West lies in its basic charter, on which the West focuses [on] while disregarding how realistic Hamas’ political behavior is in light of the regional and world changes. The West also considers that Hamas is a militia using armed violence against Israel, while ignoring its growing position among the Palestinians."

Al-Monitor noticed that Hamas’ charter, issued in August 1988, is not published on the English-language website. This charter tackles the Israeli conflict from a religious point of view only, without mentioning historical events. The charter also refers to the international community based on a colonial logic, and away from any political reconciliation language.

Influential Hamas sources told Al-Monitor, on condition of anonymity, that the movement is witnessing internal activities to change some of the charter’s content. There are also discussions to stop dealing with this charter as an official document, and instead considering it a non-binding document on the political level.

Al-Monitor also learned from Hamas political sources who requested anonymity that the movement is conducting meetings with former and current Western officials in Qatar and Gaza, where Hamas’ leadership resides. In addition, it is holding meetings in Western capitals. Both sides refuse to reveal details about these meetings, upon the demand of Western parties. This is because the Hamas movement is still listed as a terrorist organization by the European Union and the United States, and leaders holding such meetings fear legal repercussions — although the EU Court of Justice decided to remove Hamas from the terrorist list on Jan. 19.

A Palestinian official, who travels between the Gaza Strip and Europe to promote Hamas’ positions in the West, told Al-Monitor on condition of anonymity about Hamas’ weaknesses in its communication with the West. He said, “Hamas does not have any political [parties] specialized in drafting a detailed narrative that could be addressed to the West, and lacks media outlets in languages of countries in the West. The movement also lacks literary works that clarify its side of the story about the conflict with Israel, and disregards the Jewish lobbies’ influence on some Western decision-makers.”

Through its communication efforts, Hamas wants the West not to involve the movement’s religious aspect in the conflict with Israel, as it negatively reflects on the movement and it would no longer be seen as a national liberation movement. The West should not ignore some contradictions that are apparent in the Western positions toward the Palestinian cause. Notably, in December 2014 some Western parliaments recognized the Palestinian state, while others refrained from doing so to satisfy Israel.

Despite Hamas’ ongoing attempts to open lines of communication with the West through social media, amateurism in written publications and the mobilization of supporters in the West prevails in the absence of organization and coordination. In addition, Hamas seeks to keep up with the Western developments and to quickly respond to them so that its own reaction is available to Western decision-makers.