In this interview with Al-Monitor, a Christian Assyrian woman recounts her experience of being kidnapped by Islamic State militants. 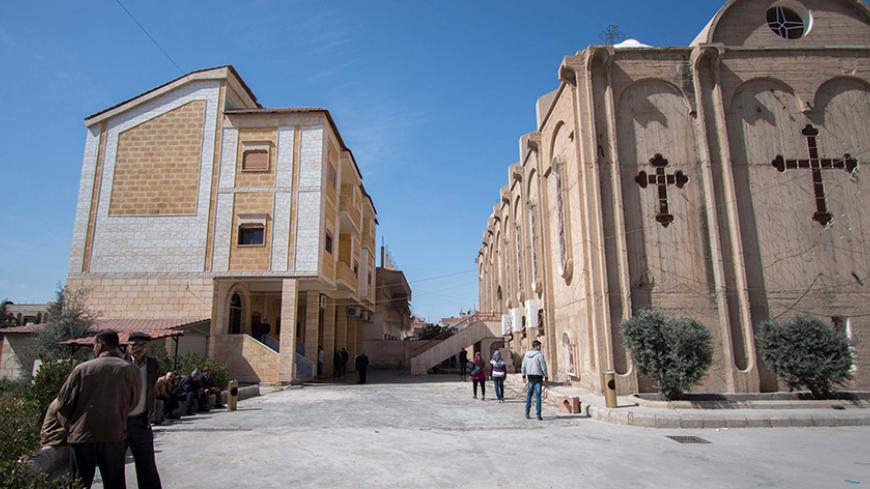 Displaced Assyrians who fled from the villages around Tel Tamr sit outside the Assyrian Church in Hasakah as they wait for news about the Assyrian abductees remaining in the Islamic State's hands, March 9, 2015. - REUTERS/Rodi Said 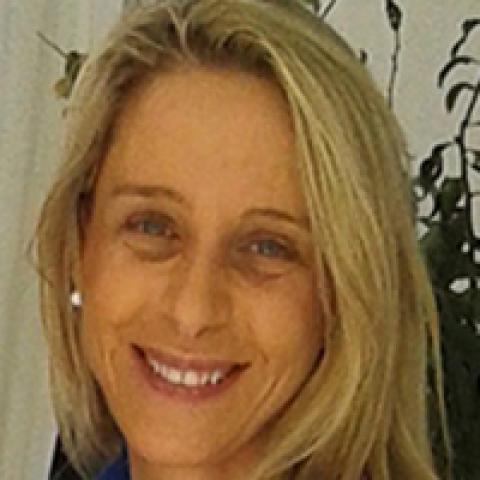 BEIRUT — They were kidnapped by the Islamic State on Feb. 23 in the governorate of Hasakah, Syria. A total of 253 Assyrian Christians, from 35 different villages along the Khabur River. A small group of 23 elderly individuals were released March 1, allegedly due to their age. Among the sources who spoke to Al-Monitor on condition of anonymity, the exact number of those initially abducted varies slightly. Since then, little more has been learned about the fate of those who are still held hostage. Statements that could not be confirmed claim that local Sunni leaders are negotiating for the release of the hostages. Ransom requests by IS reaching $35 million have not been met and a veil of deafening silence has covered the issue.

A Christian Assyrian woman released recently agreed to meet with Al-Monitor at her daughter’s home in the outskirts of Beirut and tell her story of those months living as an IS hostage and what she could learn about her captors and their identities. For security reasons, her name will not be disclosed.

Sitting on her mattress on the floor, she said she is safe now, but the rest of her family is still held by IS in Syria’s Shaddadeh. As far as she knows her family is still there, where they had all been kept since February, when the villages were attacked.

Reports on the number of Assyrians living in Syria vary, at times widely. According to Father Georgio, an Assyrian priest who is assisting Assyrian Syrian refugees in Lebanon, Assyrians in Syria prior to the conflict numbered around 50,000 and are now down to roughly 5,000. These figures are unofficial statistics collected by the local Assyrian churches and communities in Syria.

The Assyrian Christians living in Syria trace their roots back to Mesopotamians and speak a modern descendant of Aramaic. They were persecuted by the Baath Party when Saddam Hussein was in power and many fled to Syria after 2003, with the flaring of the conflict between the Sunnis and the Shiite majority in Iraq. They are divided among three main churches: the Syriac Orthodox Church (Jacobite), the Assyrian Church of East (Nestorian) and the Chaldean Church of Babylon (Roman Catholic).

The woman cried during the interview as she explained her feelings of anguish at the moment of separation from her family. Her daughter, who had been living in Lebanon for years prior to the beginning of the conflict in Syria and was present at the interview, cried with her for her sister and nephews’ fates. Georgio, who was also present, interjected with his own personal account of what the Assyrian Christian community is undergoing.

Below is the text of the interview:

Al-Monitor:  What happened when IS reached your town? Was there any resistance? Where were you and your family when you were abducted?

Assyrian:  We were at home. There had been no time to run away. They stormed in the door, their faces not covered. They put a gun to my chest and threw an image of Christ hanging on the wall on the floor. They asked me to step on it. I had no choice. My daughters and grandchildren were there. They took all of us to the river. I have broken legs [a physical condition present prior to the IS attack] so I cannot walk, my daughter had to carry me on her back. No one posed any resistance. We knew what had transpired in the village of Tel Tamer, where attempts to resist were made. Anyone who resisted there was killed, the church was bombed. They burned our house, too, but that I am aware of no one who was killed. From our village alone they took 85 people. Anyone they found they took.

Al-Monitor:  Where did they take you afterward, and how were you treated?

Assyrian:  They threw us into a boat that was half full of water and we crossed the river. Then they put us on trucks to Shaddadeh, another town in the Hasakah governorate. The first thing they did was to separate the men from the women. Children under 11 years old would stay with the women. From that moment on, we never saw the men and boys again. We were allowed, however, to send letters over to the men and receive theirs. They crammed all of us into a room with a single window. There was so little room we would take turns lying down to sleep. We would take turns by the window to breathe better.

Al-Monitor:  You spent over four months in these conditions. How did you and the other women survive? Did you suffer physical abuse by IS while in captivity?

Assyrian:  I am an elderly woman. What I feared, what we all feared, was abuse to the girls. Fortunately, that did not happen. We lived in the constant fear of it but while I was there we were not beaten, nor were there other forms of physical abuse. The psychological fear was tremendous. We were all held together in the same room: all women and children up to age 11. We slept very little and were constantly trying to cover our faces from the captors. We prayed six times a day. This gave us hope.

There were many children in the group. The youngest was only 2 months old. I remember there was a pregnant woman who went into labor and delivered her baby there. We don’t know much about how the men and boys were being treated. We were kept in a separate building. We could not hear any noise or see anything through the only window we had access to. We could only see IS men outside. During the entire period I was there, we never left the building. We lived in the same clothes and were allowed to wash a little once a week.

Al-Monitor:  Where you able to learn anything about your captors?

Assyrian:  I did not recognize their faces, which I could see because they were not covered. But I could recognize their accents. They were local Syrians from Hasakah. There must have been roughly 100 men who took over our village. Initially they seemed to be many more, but it was probably just the shock effect of seeing them arrive and the fear we felt. When we reached Shaddadeh, I heard some men who did not speak Arabic and a few foreigners. By foreigner I mean not Syrian. An IS jihadist would come to the room where we were kept hostage every Saturday and tell us that if we agreed to convert, we would be set free. It became a ritual, every week on Saturday. One day a jihadist directed this offer to me and, debilitated and exhausted, I answered, “Look at me, I could be your mother. You stay with your religion and I stay with mine.”

Al-Monitor:  Most news coverage of treatment by IS of Christians or other minorities, such as the Yazidi, is rife with brutality, shocking not just the direct victims but everyone reading about it or watching their images. Comparatively, in your case, the level of brutality appears to have been contained. Why do think this is the case?

Assyrian:  Our lives were destroyed. I don’t know why we were not beaten or worse, but I can tell you that for the entire time we lived in extreme fear. We were constantly threatened verbally. They would say to us, “We know everything about you. You speak and you are dead.” In our group no one accepted the IS "offer" to convert to be freed. But we knew that those who put up physical resistance from other villages were killed.

Al-Monitor:  Why were you released and how did you feel having to leave the rest of your family in captivity?

Assyrian:  The living conditions in that small room caused my physical condition to deteriorate rapidly. My legs, which were broken before I was kidnapped, swelled up. I lost weight, I was very weak. I think they thought I was going to die. I am not aware that a ransom was paid but I cannot be sure. They took me to the town of Hasakah by car. The person who drove me there was the same IS member who would usually bring us food. They left me at the church in the care of the priest. The priest offered the man who drove me some money for having taken me there. At first he refused, and then he took it. From there I was taken to the nearest hospital to check my physical condition.

I did not want to leave without them. The moment when they separated us to take me away, we were both crying.

Al-Monitor:  Do you have news about your family since your release and who is negotiating for the group to be freed?

Assyrian:  I have received very little news about their condition. An Assyrian priest is trying to negotiate for the release of the entire group of hostages. From what I am told they are alive.

Al-Monitor:  The European Union has been criticized for not doing enough to help civilians who are fleeing, among other countries, war-torn Syria seeking refuge in Europe. Lebanon, for example, has been overwhelmed by the number of civilians crossing its borders and struggling to manage the number of refugees. What do you think Europe and its institutions should do to help civilians fleeing war zones?

Georgio:  We receive no support. We feel completely abandoned. I try to support the Assyrian refugees with my church but there were a total of 1,400 families at a time, between those who fled from Mosul in Iraq and from Syria. It was impossible to provide the needed support to everyone. Europe is silent, not hearing our pleas for help. For many Assyrians, this is not the first time we have been displaced — first from Iraq to Syria, due to persecution under Saddam Hussein’s Baathist regime, and now to Lebanon.

Al-Monitor:  How are you able to live here in Lebanon? Do you have family here, or do you have the help of the Assyrian community here?

Assyrian:  I am lucky to have one of my daughters here. She moved to Lebanon years ago and lives here with her family. I live with her at her house. We receive some help from the Assyrian community. Father Georgio, an Assyrian priest based in [the Beirut suburb of] Hadath, helps us. We do not receive any help from the government or from other institutions dealing with refugees.