Turkey’s Constitutional Court has ruled that a civil marriage is no longer compulsory for religiously married citizens, worrying civil groups about the implications for women's rights. 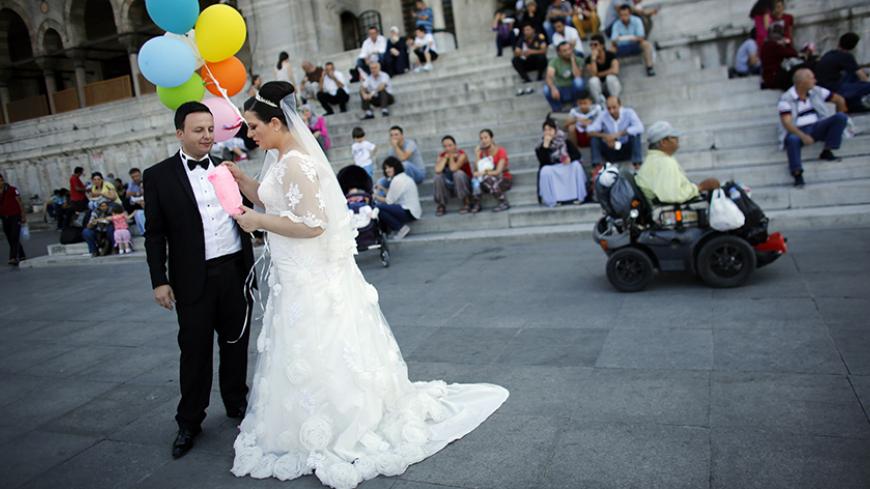 Bride Mutlu and groom Ihsan Baran pose for a photograph in front of the New Mosque at Eminonu Square in Istanbul, Sept. 11, 2014. - REUTERS/Murad Sezer

Turkey’s Constitutional Court announced May 29 that civil marriage is no longer a legal requirement for religiously married citizens, a decision that will have serious social implications. Many critics, especially women, fret that the ruling will pave the way for more violations of women's and children’s rights.

The court based its decision on a case from 2014, when a criminal court in the Turkish province of Erzurum appealed a case to the Constitutional Court involving a religiously married couple without a civil marriage and the imam who carried out the ceremony.

Prior to this latest decision, Paragraph 5 of Article 230 of the Turkish Criminal Code dictated a sentence of two to six months in prison for individuals who lived together after a religious wedding without a civil marriage. In the same article, Paragraph 6 also gave two to six months' imprisonment to an individual (typically an imam) who carried out a religious wedding ceremony without verifying a civil marriage with official documents.

But while last week’s decision annuls the above paragraphs by a majority 12-4 vote, the Constitutional Court had unanimously ruled the opposite in a 1999 case appealed by the Bursa Criminal Court. At the time, the court confirmed that according to the Turkish Criminal Code, religiously married couples that lived together were committing a crime, but individuals who lived together without any religious ceremony were not. The court then explained its decision on the basis of upholding the Turkish Civil Code and on the state’s responsibility to protect women and children, as described in Article 41 of the Turkish Constitution.

Now the 1999 decision has been reversed. From a liberal point of view, the court’s ruling may be interpreted as a positive one in terms of enhancing people’s freedom to choose the way they want to live. It recalls another decision from January 2014, when a court set a truly progressive precedent: Any married woman may continue to use her maiden surname by appealing to a court.

However, worries about the consequences of the court’s latest decision spurred a chain of strong reactions from human rights activists from academia, nongovernmental organizations and female political leaders from both the ruling party and the opposition. Notably, Deputy Parliament Speaker Aysenur Bahcekapili of the ruling Justice and Development Party (AKP) stated her concerns for increased risks of polygamy and inheritance or alimony problems for children. Main opposition Republican People’s Party deputy Candan Yuceer reminded listeners that in Turkey, at least one in three women were married while underage and pointed out that the court’s decision legalized child marriage in a way, leaving women and children with no rights in the event of divorce or a spouse’s death. Nationalist People’s Party deputy Ruhsar Demirel conveyed similar concerns. The Federation of Turkish Women's Associations announced that it would take the case to the European Court of Human Rights, the rulings of which are binding for Turkey. The federation pointed out an ECHR ruling on a case from 2010, when a woman named Serife Yigit received no inheritance rights to her deceased husband's pension and insurance because they had only been religiously married. The number of similar cases will only increase, the federation warned.

Yet not everyone opposes the court’s decision. Mustafa Sentop, deputy chairman of the AKP, stated his approval: “There is no punishment for those who are not married and living together, and there is punishment for those who have a religious marriage. Such logic is unacceptable. This decision is for one’s own conscience. The topic of child brides and second wives are separate issues.” On a similar note, Naci Bostanci, the head of the AKP’s parliamentary bloc, stated that no law should contradict social realities. He sees no danger of women losing their rights because of this decision.

In fact, Bostanci seems to ignore certain social realities, with catastrophic consequences. Turkey is infamous for its high rate of child brides and the court’s decision increases the likelihood of women and girls finding themselves in such situations with no hope for redress. Marrying underage girls may become even more internalized within certain communities, especially in Turkey’s rural areas. Unfortunately, this latest decision now puts any achievements in the arena of child brides at very high risk.

Family and Social Policies Minister Aysenur Islam is very familiar with these problems. She stated that that her ministry cannot see as favorable any decision that could lead to more child marriages or removes legal regulations. Islam also announced new measures by her ministry to further prevent and discourage such practices.

Not surprisingly, the extreme polarization of Turkey inevitably made this decision yet another point of conflict between the more religious and secular layers of Turkish society. Former Constitutional Court General Secretary Bulent Serim stated that after Turkey’s constitutional referendum in 2010, the court’s decisions have shown the court's definition of secularism has became equal to the AKP’s definition of secularism, which he sees as a threat to the republic’s values.

To shed some light, it is worthwhile to look back at the trajectory of state decisions on the matter of marriage throughout Turkey’s history. Renowned Turkish journalist Taha Akyol clarified for Al-Monitor that during Ottoman times, matters of marriage and birth were registered in the “Turkish Judge Records.” Sultan Suleiman the Magnificent, also known as the Lawgiver, made a state document a precondition for marriage. It was not a legal or religious condition, but a necessary document for resolving legal disputes. In 1881, Sultan Abdulhamid II took an important step by declaring that after a religious wedding is performed, official registration had to follow within 15 days for both Muslims and non-Muslims.

The first true reform in the family law domain was made in 1917 with the Family Law Edict. Among many other provisions, it stipulated that men who were not yet 18 and women who were not yet 17 had to get special permission from a court to marry. No such protective measure for minors had existed before. Another very important step for protecting women was a limitation on polygamy and a provision according to which a woman could request monogamy as a condition for marriage. In cases of extreme incompatibility, the new law also recognized a woman’s right to demand a divorce. But this law ended up being abandoned after many disputes. Minorities that wanted to protect their communal autonomy requested that the British occupation forces halt its enforcement. In 1926, Turkey abolished Ottoman laws that incorporated Sharia and started enforcing the Swiss civil code.

Simply put, while the Constitutional Court’s latest judgment is legally valid, in a sense it reverses the state’s control over the institution of marriage, altering not just a republican but also a late Ottoman tradition. And while it may sound liberal on paper, it may not be liberating in practice. It is perhaps telling that the court’s verdict was brought about by a group of decision-makers that did not include a single woman, whereas millions of Turkish women need the state’s protection against the patriarchal customs in their society.

Editors note: Taha Akyol is the father-in-law of Riada Akyol.