Despite the Turkish military's deep reservations, it appears to be preparing itself to enter Syria in the next two weeks. 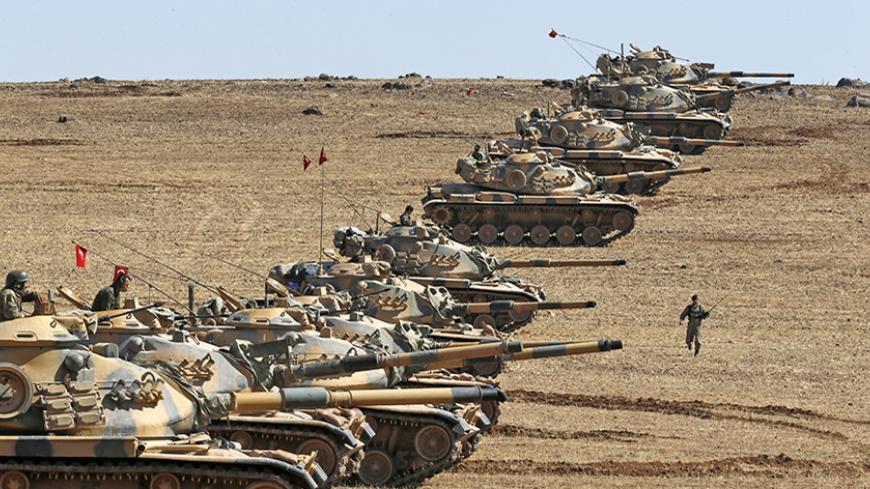 Turkish army tanks take up position on the Turkish-Syrian border near the southeastern town of Suruc in Sanliurfa province, Oct. 6, 2014. - REUTERS/Umit Bektas

Speculation is at an all-time high in Turkey over potential militarily intervention in Syria to set up a security zone in the Jarablus area linking the Kurdish cantons of Kobani and Afrin. An anonymous source informed Al-Monitor that the Turkish General Staff has informed the government that the military units intended to take part in a military operation will be done with their preparations and ready to go by the second week in July.

What the journalists must do now is leave aside the debates in Ankara and focus on military movements at the Special Forces Command, the 5th Armored Brigade at Gaziantep, the 20th Armored Brigade at Urfa and the 2nd Tactical Air Force at Diyarbakir, which would spearhead a possible Syrian operation. It is time to start observing the field developments pertinent to a possible military intervention in Syria.

In my ​May 4 article for Al-Monitor, I noted that the realism of the Turkish military command was stopping President Recep Tayyip Erdogan and the rest of the Justice and Development Party (AKP) government from intervening militarily in Syria. So what changed since May 4 to give credence to reports of military intervention?

Developments in Turkey’s domestic politics, events in Syria and deteriorating relations with the United States all played parts in the shift toward serious consideration of intervention.

In a chat with an official from the US Embassy in Ankara after my May 11 article, the first question he asked was about the headline. Why was it important what the military thought of the election results, he wanted to know.

I was particularly curious about how the Turkish military would assess the electoral success of the Peoples' Democratic Party (HDP), which it sees as political extension of the Kurdistan Workers Party (PKK) terror organization. The military institution in which I served for a long time did not surprise me. The fear of the Kurds that has traditionally lurked in the subconscious of the Turkish military surfaced. While there was increasing admiration of the HDP in the Turkish mainstream media and liberal quarters, the Turkish military’s phobia became more pronounced. This appears to have played a part in easing a bit of the military’s resistance to intervene in Syria.

Also restraining the AKP government were developments in Syria after Tell Abyad fell under the control of the Democratic Union Party (PYD), which the Turkish military still sees as the Syrian extension of the PKK. When the PYD took Tell Abyad, the Kurdish cantons of Jazeera and Kobani became contiguous. My next piece asked the same question the Turkish military was asking after its shock at Tell Abyad falling so easily to the PYD: What next?

Intelligence reports reaching Ankara after the fall of Tell Abyad said the PYD was now turning westward to reach the last Kurdish canton, Afrin, and that the final goal of the PYD was to create a Kurdish corridor that will abut Turkey and reach the sea. Those reports naturally encouraged AKP leaders to disregard any restraints stemming from the military’s realism.

Another factor that weakened the "braking mechanism" was the crisis of confidence the Turkish military has been having with the US plans for Syria. Security officials who recently spoke to Al-Monitor in Ankara pointed to mounting tension between the US and Turkish security bureaucracies. These sources insist that Ankara’s worst fear is for the United States to reach an understanding with the Syrian regime to smash the Islamic State and hand over areas it vacates to the PYD. According to these officials, the Kurdish corridor project with its “Made in the USA” tag have been testing the limits of the traditional alliance between Turkey and the United States.

For the past three or four days especially, the pro-government news media has been beating the drums of war and breathlessly reporting that the AKP government has instructed the Turkish high command to prepare for a military security zone in Syria, that the preparations for a military operation are underway and that it is only a matter of time to start the operation to take over the Marea Line region that will cover Jarablus south to a security zone.

The latest reports say that Turkey, determined to prevent either IS or the PYD from controlling the Jarablus area, will form a security belt both against the PYD’s military arm and IS. They claim that, initially, 18,000 Turkish soldiers will enter Syria to secure the area and then control the region by fire with its long-range artillery and other firepower available to the army and the air force.

There have been misguided and historically false comments that the legitimacy of the operation could be assured, as Israel did in south Lebanon, by declaring a unilateral security zone, reserving the right to intervene militarily without a UN decision.

The Turkish public, meanwhile, has found out that many columnists close to the government were also extensively informed about military strategy, tactics and weapons.

Security sources who spoke to Al-Monitor in Ankara emphasized some interesting points. The first is the risk of the AKP and Erdogan exploiting a possible Syrian operation for an early election campaign. One source who asked not to be identified said, “This risk really worries the military. Erdogan and the AKP, with their massive media power, could engineer a major perception of victory and use that to go for early elections. This is why the military is awaiting the instructions of a new government instead of a government that is basically deposed."

Another source said high-level command visits to Gaziantep and Urfa offer important clues about preparations for an operation. “Such an operation requires clear operational orders, a clear strategic goal, clear rules of engagement, clear definitions of friend and foe and a well-drawn-out calendar. At the moment all these are very unclear, even obscure. Under such uncertainty, how can you issue operational and tactical orders to your units?”

From these words, it is clear the military hasn’t overcome its concerns and has unanswered questions about the mission, tactics and techniques of the operation. Yes, the AKP government might have eased some of the high command's reservations on an operation in Syria, but it hasn’t yet fully removed them.

In sum, it is still possible to say that despite the strong wishes of the AKP and Erdogan, the Turkish military’s realism still has a restraining effect on a military operation, albeit one somewhat less effective than it was last month.

The next two weeks are critical. The current situation may be influenced by two factors. The first is how the United States will perceive the developments and react to them, and the second will be whether the PYD will persuade Ankara of its goodwill.