Opening the Turkey-Armenia border would benefit both countries economically, but ongoing tensions and the results of the June 7 elections in Turkey do not bode well for such a move. 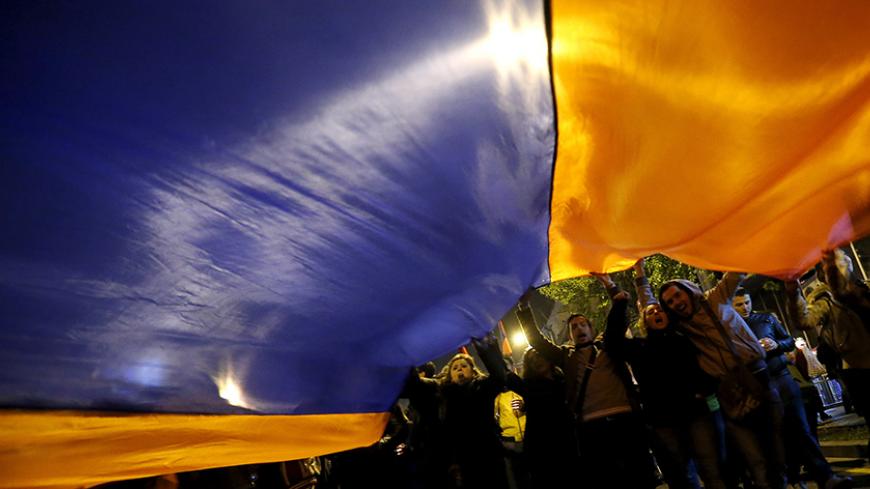 GHARIBJANYAN, Armenia — Hagop Kevorkian has been waiting for the same train for 22 years. He used to work as a conductor on services crossing the Turkey-Armenia border, but now he is the sole watchman at the decaying Akhuryan Station, in northern Armenia, 2 kilometers (1.2 miles) from the border.

“Trains came to the station loaded with all kinds of things. We would do customs checks and then unload the goods. One hundred fifty people used to work here. They were all from Akhuryan village. The trade supported the whole village,” Hagop said, sitting at his table in the gloomy station office surrounded by yellowing technical diagrams of train lines and wagons. “Now there’s nothing. I just sit here every day.”

Service between Akhuryan and Dogu Kapi (East Gate) in Kars province was halted in March 1993, after Turkey closed its border with Armenia in solidarity with its ally Azerbaijan amid the Nagorno-Karabakh War. It has not resumed. Today, Akhuryan Station, which sits outside Armenia’s second largest city, Gyumri, is a symbol of the human cost of the bitter impasse in relations between Turkey and Armenia.

“I have been here for 33 years. For 22 of those years, I have had nothing to do. There’s nothing here anymore,” Hagop said. Currently, he spends his days sitting alone, waiting, wearing the same uniform that he had worn during the Soviet era, smoking cigarettes and occasionally watching an ancient black-and-white television perched atop a filing cabinet.

What are the prospects for the border reopening? With the emotion of the genocide centenary having passed, some think a new window of opportunity to resume talks might emerge. Turkey, which closed the border in the first place, remains the dominant player, but it is currently embroiled in fraught negotiations to form a new coalition government after the June 7 general elections. With talks continuing, relations with Armenia are far from the most important issue on the agenda.

Hope last came to Akhuryan Station in 2009, when the two countries signed diplomatic accords. The comprehensive deal foresaw the opening of the border and an exchange of ambassadors. With momentum building after the ratification of the protocols, steps were taken to reopen the station and resume cross-border rail links. Hagop said the station building was partly renovated, the platform spruced up and a new track laid. Then the agreement collapsed in 2010 after Turkey made it conditional on an Armenian peace deal with Azerbaijan.

Economic incentive is key to securing a rapprochement. This is particularly true for Armenia. Landlocked and geographically isolated in the Caucasus Mountains, its two longest borders — with Azerbaijan and Turkey — have been closed for almost the entire time since its emergence after the collapse of the Soviet Union. One-third of Armenia’s population of 3 million officially lives below the poverty line, and financial remittances from Armenians working abroad, especially in Russia, play an oversized role in the national economy. The World Bank reported in 2014 that such transfers constitute 21% of the Armenian economy, among the highest rates in the world.

Elmira Bayrasli, an American consultant who has worked on joint Turkish-Armenian entrepreneurial initiatives in recent years, is optimistic that the economic carrot will nudge Ankara and Yerevan in the right direction.

“Improving economic ties with Turkey would relieve a lot of Armenia’s economic challenges and open up opportunity,” Bayrasli said via email. “Its leaders know that it must trade and collaborate with its neighbors, however difficult those neighbors may be. For Armenia [opening the border] would boost revenue generation, investments and the country's GDP. For the Turks in eastern Turkey, it would boost their economy and stem the tide of migration. Trade with Armenia would open up opportunity for young people to set up businesses and target Armenia as a market.”

Suat Kiniklioglu, who played a leading role for Turkey in the failed accords, recently tweeted that Turkey should reopen its border with Armenia. This, he contends, would link Georgia, Armenia and Azerbaijan to the Turkish market and turn the South Caucasus into “Turkey’s back garden.” The phrasing may be crude, but Kiniklioglu’s words probably bear some truth. Many Armenians express concern that their country could be flooded with Turkish products, but the alternative of economic isolation has not been a huge success.

There is a sense, however, on both sides that the mood has darkened since the collapse of talks in 2010, according to Nouneh Sarkissian, who has worked to forge links between media groups on both sides of the border.

“In Armenia, people were disappointed by [the failure of] the process and the efforts made. Some negative stereotypes about Turkey have become stronger. Although there are some civil society groups that are still eager to build better bridges between people, I think that right now society in general is not ready for a new stage of negotiations,” Sarkissian said in Yerevan, the Armenian capital. She also pointed, however, to the most recent Caucasus Research Resource Center-Armenia survey data released in February in which 51% of Armenians approved of opening the border. Only 33% disapproved.

At Akhuryan Station, Hagop is pessimistic. “Of course we want the border to reopen. When the station was still open, everyone from the village worked here. When it closed, they all had to move away. If trains came again, people could come back and work. But I don’t expect anything to change,” he said.

Along with tension over the Armenian genocide, the major obstacle to normalization between Ankara and Yerevan remains Azerbaijan. Any modest economic benefits that Turkey might accrue from opening its border with Armenia are dwarfed by its interest in keeping Azerbaijan, a petrostate, onside. Thomas de Waal, a specialist in the South Caucasus at the Carnegie Endowment for International Peace, highlighted the Baku factor in his recent book on the last 100 years of relations between Turkey and Armenia.

“[In 2009], Azerbaijan lobbied its Turkic ally to not allow an Armenian-Turkish border opening without Armenia making concessions in the Karabakh dispute,” de Waal told the Council on Foreign Relations. “For Turkish leader Recep Tayyip Erdogan, more votes would be lost by disappointing Azerbaijan than could be won by making peace with Armenia.”

Much depends on the kind of coalition government that emerges in Turkey or whether a government emerges at all. If the Justice and Development Party (AKP) had won a strong parliamentary majority in the June elections, it might have had the confidence to push through potentially unpopular measures, such as normalizing relations with Armenia. Instead, talk is currently of a coalition between the AKP and either the Republican People’s Party or the Nationalist Action Party (MHP). It is highly questionable whether either option would lead to a shift in Turkey’s Armenia policy, with an AKP allied with the far-right MHP boding particularly ill. The alternative of an early election would further delay any changes to Ankara-Yerevan ties.

Speaking to the Turkish daily Hurriyet in April, Armenian President Serzh Sargsyan made the case for reopening the border, without going into details about what it would take. “[Opening the border] would lead to a much more secure atmosphere, creating the grounds for commercial connections in the interests of both sides. It would help the economic development of Turkey’s eastern provinces. It would invigorate contacts between our civil societies. I’m sure that such a step would have a positive effect on the reconciliation of both peoples,” Sargsyan said.

Sargsyan's words might herald a new push for rapprochement, or they may only herald another false dawn. Either way, Hagop will be watching closely at Akhuryan Station.