Despite protests, and being banned since the 1950s, fasliya marriage has re-emerged among Iraqi tribes. 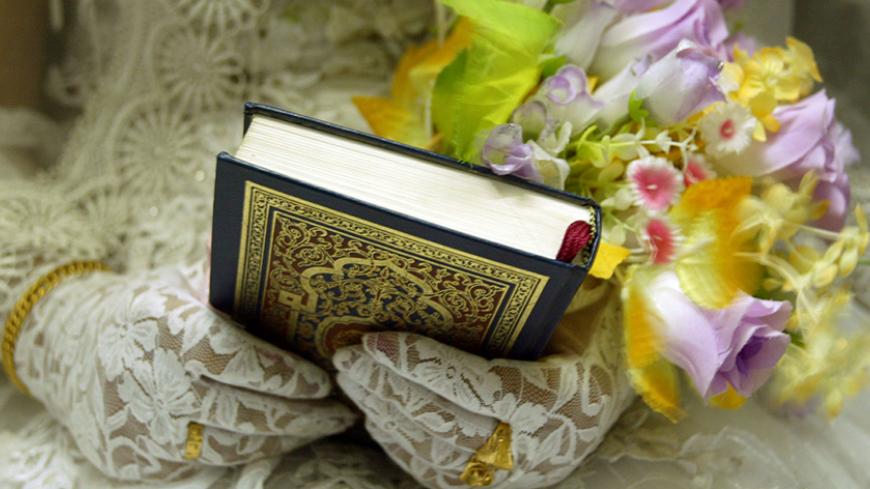 An Iraqi newlywed sits holding a Quran and a bouquet of flowers during her wedding party in Baghdad, July 1, 2004. - REUTERS

BAGHDAD — Women took to the streets of al-Mutanabbi Street in central Baghdad June 2, holding large banners denouncing fasliya marriage — the Arabic word for marriages arranged as compensation, through which tribal conflicts are resolved — which has surfaced in Iraq anew. The return of this type of marriage comes as a result of a frail state and the predominance of tribal values over social life, as well as the exacerbation of conflicts between Iraqi tribes in central and southern areas.

Women who have been placed in a fasliya marriage are not entitled to file for divorce or separation because, according to tribal customs, they are stripped away of any rights.

In Basra in the south of Iraq, tribal disputes worsened with the spread of arms, leading to the death of many civilians. Details on these incidents remain unknown because of the closed nature of tribes. In November 2014, these disputes required the intervention of the Minister of Interior Mohammed al-Ghabban, and the Basra governor, Majid al-Nasrawi, to limit the spread of violence and encourage tribal chieftains to bring the disputes to an end and abide by the law. In a related context, news spread at the end of May 2015 about 50 women engaging in fasliya marriages to settle a dispute between two conflicting tribes in Basra, al-Shawi and al-Karamsha.

On June 2, media consultant for tribal affairs in Basra, Sheikh Mohammad al-Maryani, denied the news and tried to make it sound less grave, saying in a statement to al-Sumaria channel that a crisis broke out between two large tribes in Basra over the death of a woman during an armed conflict between both tribes. Therefore, al-Shawi tribe presented 10 women — not 50 as the media claimed according to al-Maryani — to al-Karamsha tribe for fasliya. The two tribes refused to talk to the media about the incident, claiming it was a personal affair.

At the end of the 1950s, the Iraqi government issued a law forbidding women to be given as blood compensation. The current lax situation and the impotence of consecutive governments led to the return of the once demised tribal customs that are practiced away from the state’s authority.

Iraqi citizens, notably in the south and central areas, such as the provinces of Basra, Maysan and Dhi Qar, now resort to tribes to resolve their differences.

The reappearance of fasliya marriage stirred denouncing reactions from clerics, civil society organizations and civil activists, labeling the practice as violative of the above-mentioned law that guarantees the rights of individuals, as well as of women's rights.

Safad Abdelaziz, an activist with Protection and Development of Iraqi Family Association, announced the launching of a campaign titled “Unite to end settlement tribal laws against women in Iraq.”

"This campaign aims at distributing leaflets in schools, universities and markets to raise social awareness, specifically among women, on the illegality of this practice and the need to end it as it violates domestic and international human rights laws. Representatives of this campaign also visited tribal sheikhs in Diwaniyah and Dhi Qar to encourage them to denounce the practice. Sheikhs, however, were not so fond of the ‘intrusive’ campaign, as they described it. Some sheikhs even prohibited us from distributing the leaflets," Abdel Aziz told Al-Monitor.

She added that the association notes around 250 fasliya marriages in Iraq annually, most of which are concentrated in central and southern provinces, such as Basra, Diwaniyah, Babil and Maysan.

Yehya al-Akili, a tribal sheikh in Baghdad, told Al-Monitor that fasliya marriages were brought to an end in the 1970s as the state back then was able to limit them, and then currently re-emerged because of the current state’s weak influence.

"These marriages are strictly practiced in rural areas. Tribes in urban settings, like Baghdad, are far from restoring this practice. If the state remains as weak as it is, the obsolete customs will make a comeback, as no one is guaranteeing the rights of individuals, but tribes," Akili said.

The Office of the High Commissioner for Human Rights in Iraq (OHCHR) noted in a statement on June 7 that there were 11 current conflicts among tribes. These tribes could resort to the same practice used by the two tribes in Basra. The conflict between the two Basra tribes ended with a fasliya marriage, according to tribal customs.

Al-Monitor was able to secure a copy of the statement in which OHCHR in Iraq called on the government to put an end to these inhumane practices against Iraqi women and to reinforce, train and raise awareness of the police to play an effective role in settling tribal disputes.

A religious rejection of such practice can contribute to its end. On June 5, during a religious sermon in Karbala, the representative of the Shiite religious authority in Karbala Sheikh Ahmad al-Safi denounced the practice on moral and religious levels. "In any case, a girl should not to be forced into marrying someone she does not want," he said.